“During every week from April to September there are, on the average, ten wild plants coming into first bloom. In June as many as a dozen species may burst their buds on a single day. No [one] can heed all of these anniversaries; no [one] can ignore all of them. … Tell me of what plant-birthday a man takes notice, and I shall tell you a good deal about his vocation, his hobbies, his hay fever, and the general level of his ecological education.” 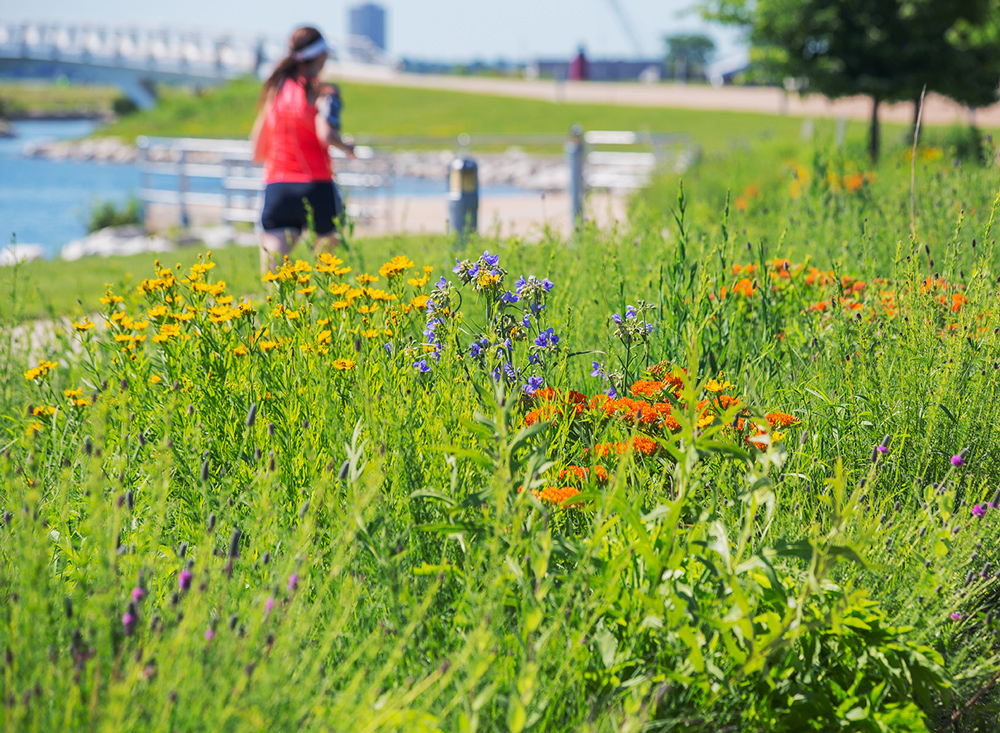 Phenology is the study of seasonal changes in the landscape, such as the emergence of plants and the migration of animals. Hearing the term reminds me of A Sand County Almanac, Aldo Leopold’s epic tribute to the natural world. The quote above is from a chapter entitled Prairie Birthday, which strikes me as appropriate for the landscape of Lakeshore State Park. This 22-acre treeless island in Milwaukee Harbor, which was wholly fabricated from debris excavated from Milwaukee’s deep tunnels, has been planted with flowers and grasses native to Wisconsin prairies. 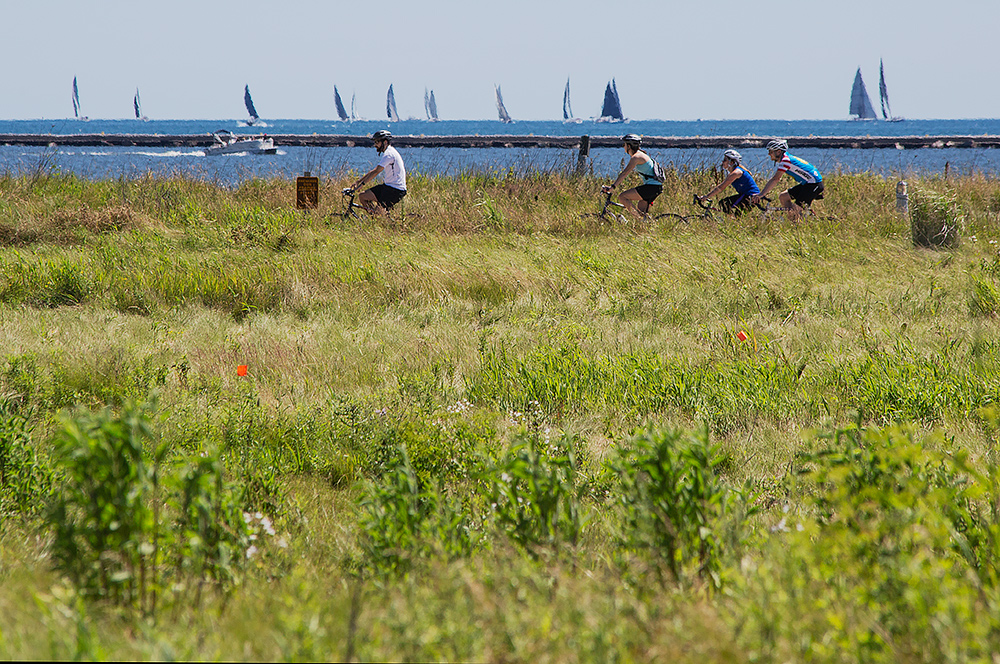 It is a bold initiative, creating a park from scratch and in such an unlikely and precarious location between city and lake. Leopold also wrote this:

“I have read many definitions of what is a conservationist, … but I suspect that the best one is written not with a pen, but with an axe. It is a matter of what a man thinks about while chopping, or while deciding what to chop. A conservationist is one who is humbly aware that with each stroke he is writing his signature on the face of his land.” 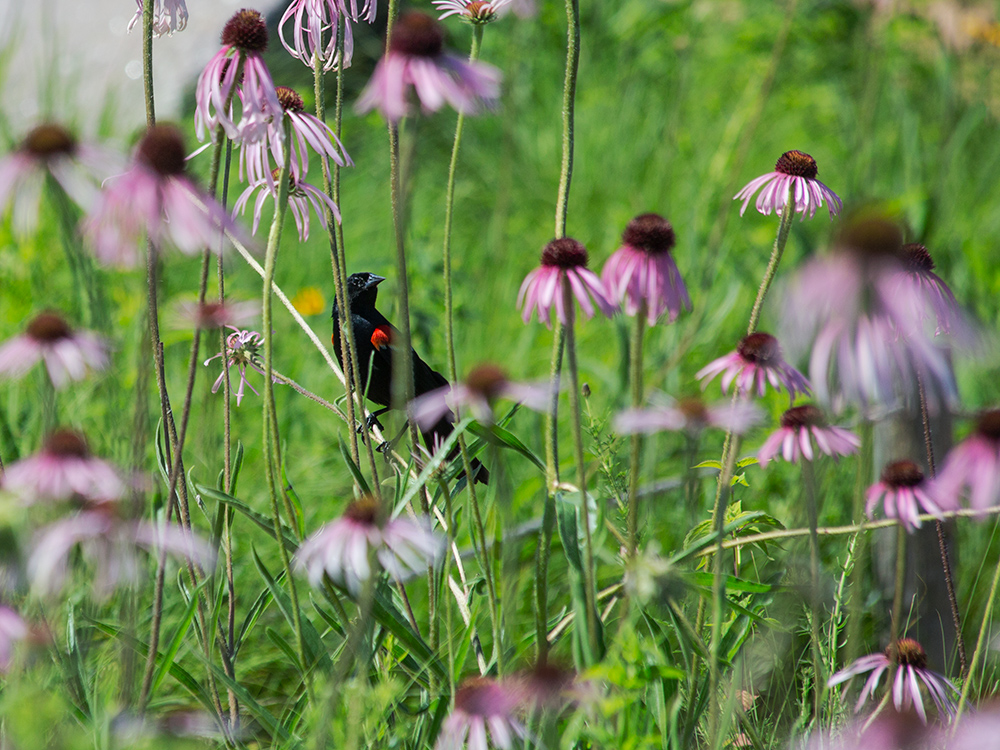 I went to Lakeshore State Park for a phenology hike. It was a brilliant morning, not a cloud in the sky. The day promised to be hot, but the cooling effect of Lake Michigan had so far mitigated the relentless sun. A great time to explore the park. In the shade of a grove of river birches at the north entrance, I joined a small gathering, which had been organized by the Southeast Wisconsin Hiking Group of Meetup.com. 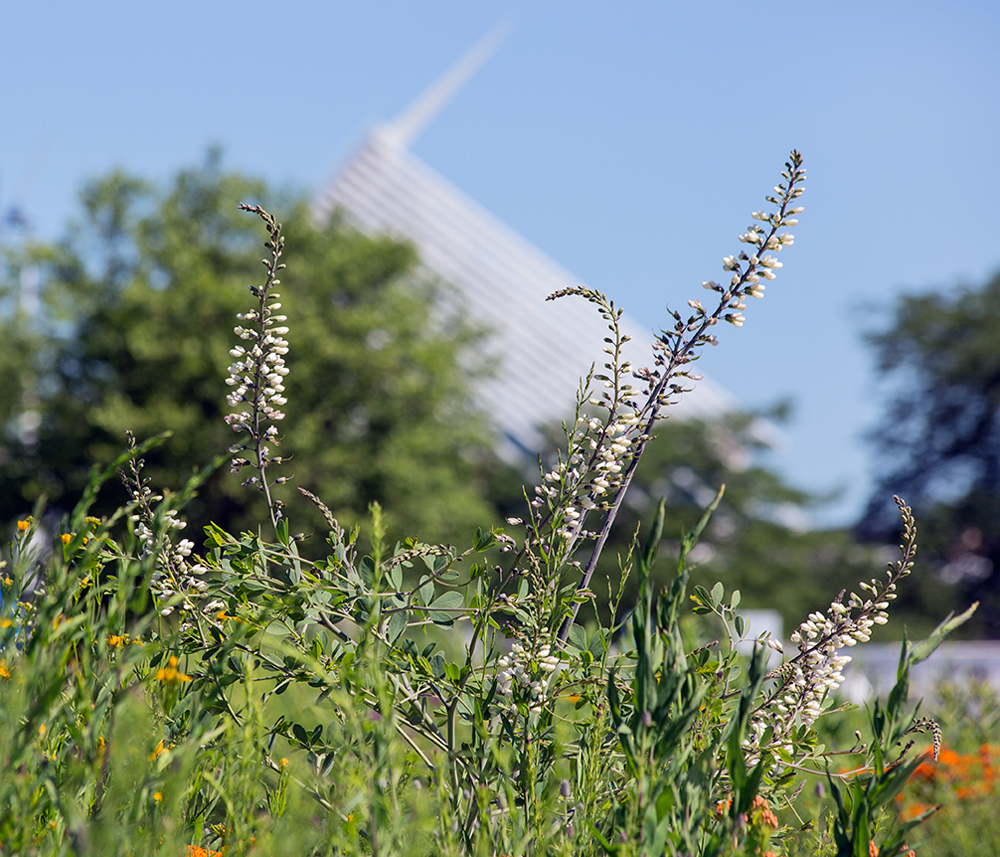 The group leader, Ann Duffy, a DNR naturalist, was explaining that the river birch are native to the area and water-loving. However, the concrete harbor wall prevents their roots from accessing the lake directly. Sometimes water has to be pumped up for them. Part of our “signature on the face of this land.” 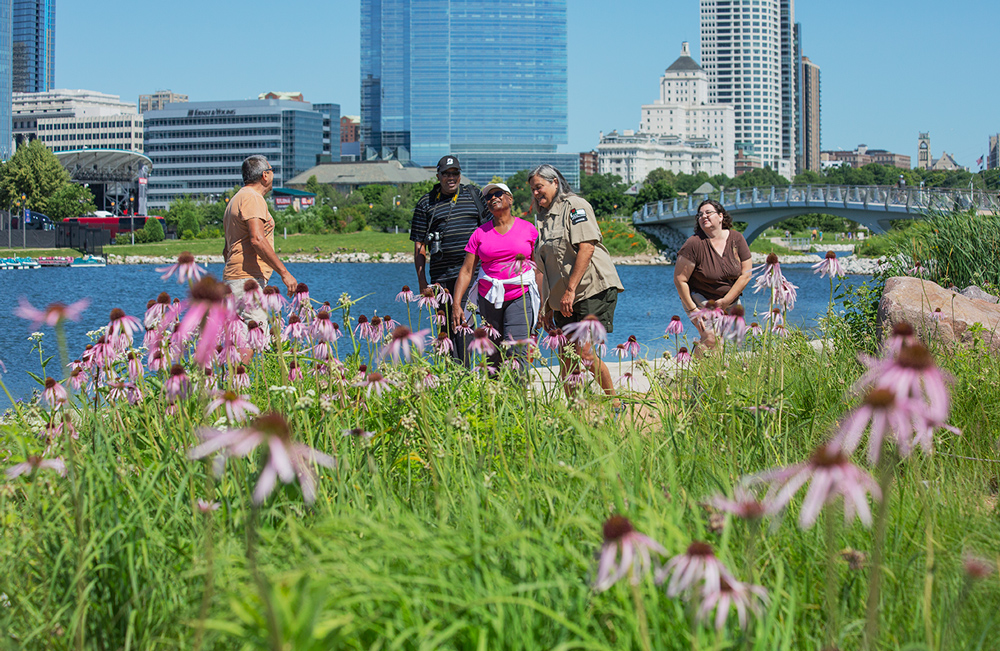 The six of us meandered from one end of the park to the other, which took about an hour. The cyclists and joggers zipping past us in a continual stream, meanwhile, could make a round trip in a few minutes. In deference to the theme of phenology, Duffy pointed out and named the variety of mid-summer blossoms we encountered. I made a few photographs along the way, which I am sharing with you here. 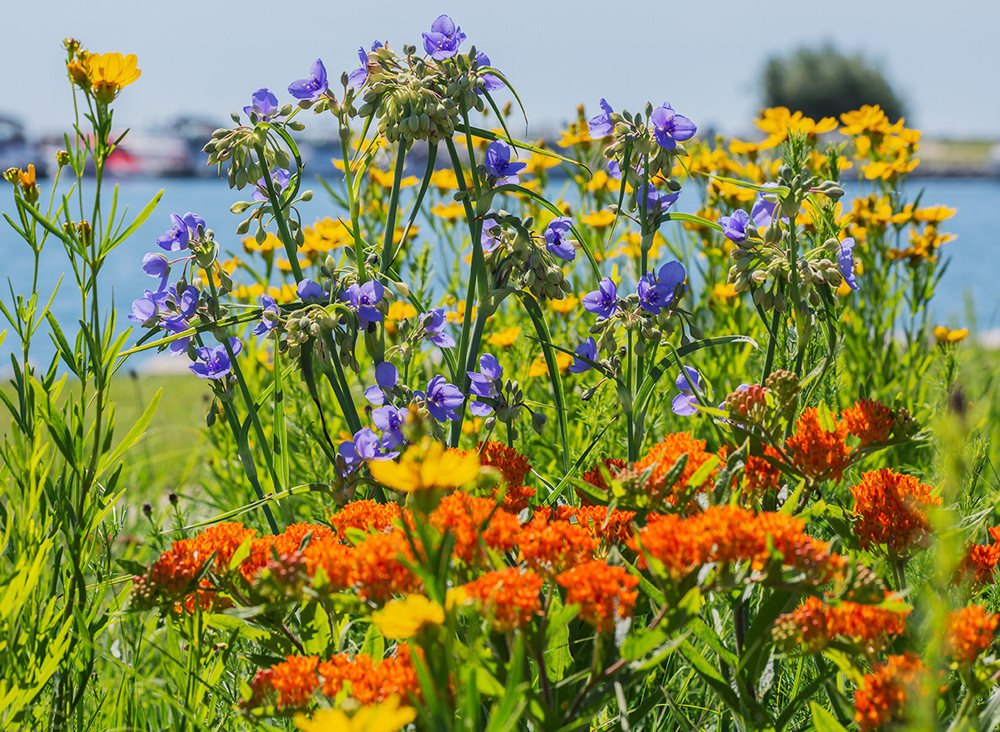 The pictures, however, because they are necessarily fragmentary, do not convey the sense of spaciousness one gets in this unique urban park. While the sight lines are dominated by the city skyline and the hard Lake Michigan horizon, it is the sheer physical presence of the sky that overwhelms. Here again is Leopold, who may as well be speaking of flowers or prairie landscapes as well as cranes:

“Our ability to perceive quality in nature begins as in art with the pretty. It expands through successive stages of the beautiful to values as yet uncaptured by language. The quality of cranes lies, I think, in this higher gamut, as yet beyond the reach of words.” 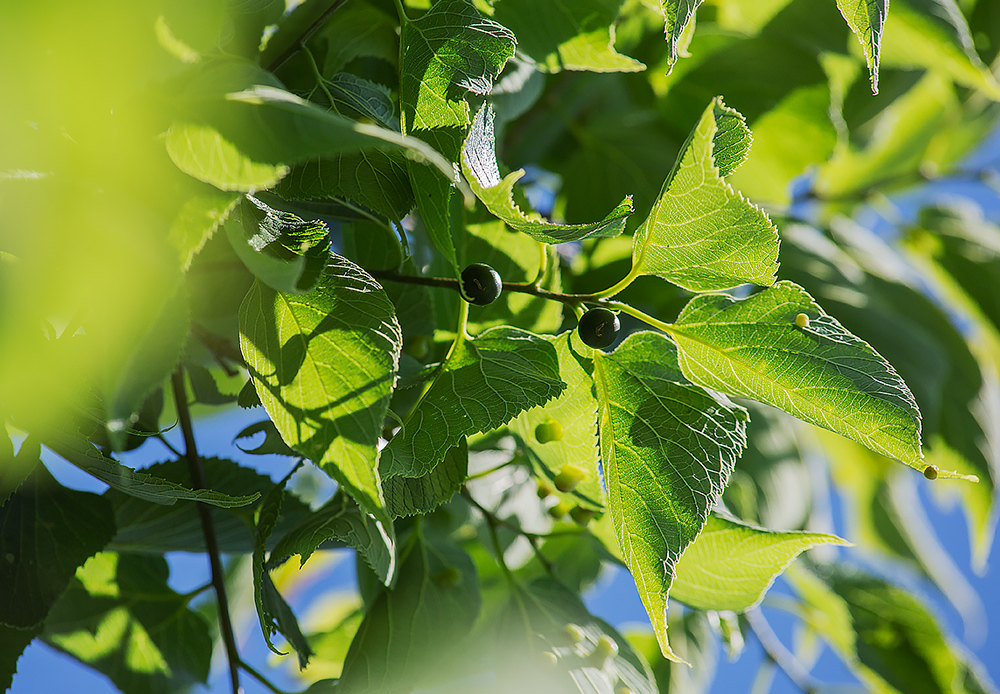 The ripe berries of the hackberry tree, two of which can be seen here (dark purple), are not only edible but delicious, according to Duffy. This was news to me and I have several hackberry trees in my yard! These were too high to reach. So we couldn’t prove it on the spot. I will be testing it out at home. 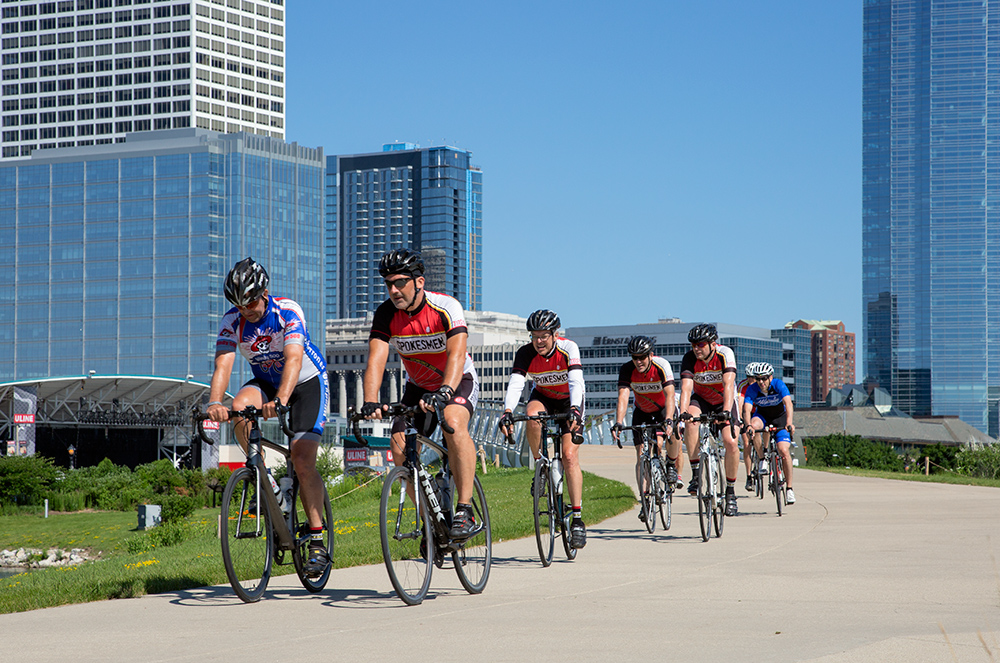 The Spokesmen rolling through the park.

It seems to me that phenology in the Anthropocene Age ought to include the seasonal appearance of humans as well as plants and other animals. 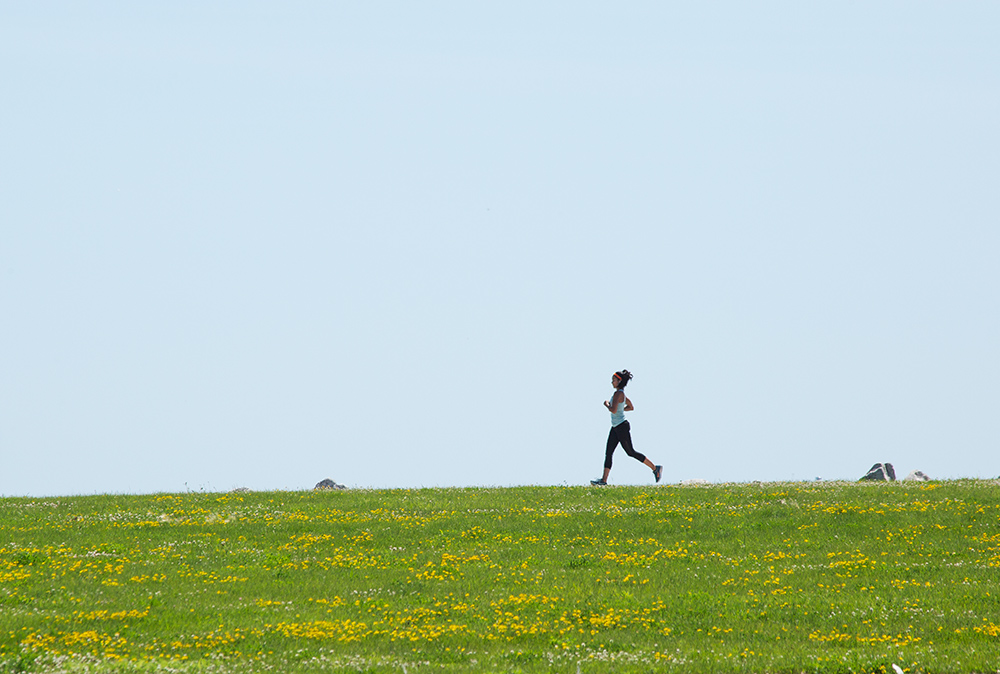 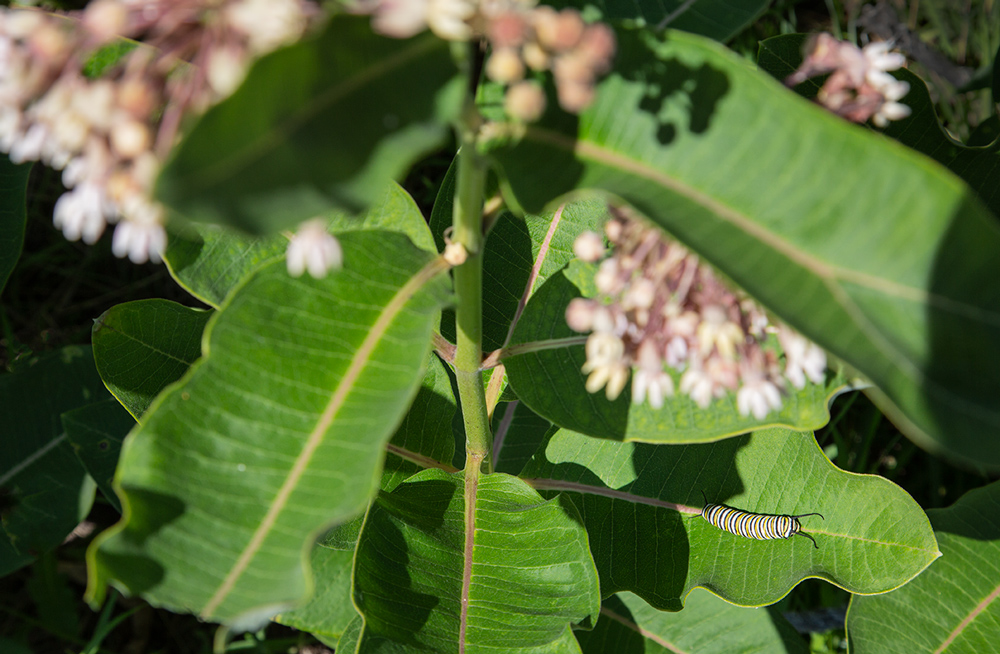