Milwaukee County Parks at a Crossroads

Will our parks system remain intact and reliably public?

It’s long been a truism that Milwaukee County residents love their parks. Nonetheless, continual defunding for three decades has left much of this historic park system frayed and even derelict. Thus, park facilities are increasingly susceptible to threatened or actual closures and transfers, including piecemeal handing off of parks to be managed and even controlled by nonprofit or for-profit entities. For example, O’Donnell Park was nearly sold for for-profit redevelopment in 2014 and later was transferred to the Milwaukee Art Museum to manage.

Milwaukee County Executive Chris Abele has declared that he expects that county parks will soon operate entirely on revenue from fees, concessions and other sources—instead of continuing to rely on time-honored support from local taxes, as reported by the Shepherd Express in January. Ever-higher user fees are resulting in park services becoming less affordable for many residents. Other parks-related disparities impact racial and economic equity.

Privatization deals sometimes limit public access to facilities. A wide range of “public-private partnerships” with for-profit or nonprofit entities have many potential accountability levels and outcomes. For example, Journey House, a nonprofit organization, has recently been allowed to completely fence and control a football field in Mitchell Park and most of Baran Park for private baseball fields. Years ago, Lake Park’s former public pavilion was repurposed as Bartolotta’s Lake Park Bistro, a high-end restaurant; public use is now confined to a lower-level community room.

Notably, no other urban park system in the country is trying to finance its operations solely through earned revenue, according to Charlie McCabe, director of the Trust for Public Land’s Center for City Park Excellence. He said that generated revenue “is a small portion of most city parks’ budgets.” That figure is currently nearly 65% for Milwaukee County Parks.

Adam Arvidson, director of strategic planning for the Minneapolis Park and Recreation Board (MPRB), said he cannot fathom funding parks solely from earned revenue. “It would impact every single decision that we make,” he told the Shepherd. Arvidson was instrumental in a process that resulted in the MPRB becoming the first American park agency to require, by ordinance, that its capital improvement plan use specific, transparent, data-driven criteria to help address racial and economic equity.

Milwaukee County Supervisor John Weishan Jr., who has represented a South Side district since 2000, told the Shepherd that he frequently hears statements by parks staff indicating they have accepted County Executive Abele’s defacto income-generating mandate as a fiat, “even though the [Milwaukee County Board of Supervisors] has never voted—nor even debated—whether to support this drastic shift in parks policy.” Increasingly, more parks-related decisions seem to be influenced by a quest for cash rather than how to address traditional parks’ functions of serving the community.

Weishan expressed concerns about “increasing privatization and cuts in service, even to what were once basic park amenities.” For example, Lincoln Park’s deep-well outdoor pool—the last one still open on Milwaukee’s North Side—was almost permanently closed this year, ostensibly for not producing enough revenue. That closure was averted after intense citizen outcry.

In March, the Abele administration announced it would oust the popular Saturday morning Winter Farmers Market from the Mitchell Park Domes Annex, based on the hope of gleaning more money through privately catered Saturday evening rentals. After community pushback at a Milwaukee County Board hearing, county administrators are now negotiating with market organizers about a possible alternative solution.

Preserve Our Parks (POP), Milwaukee County’s watchdog advocacy group, launched a petition drive this month to demand dedicated parks funding. The petition urges county officials to budget adequate funding for parks and parkways. POP is also hosting public meetings to educate citizens about local parks history, budgeting and other issues. Founded in 1999, POP is committed to reversing the trajectory of decline and neglect. The group actively “seeks to make our parks’ preservation a high priority for county policymakers and strongly opposes the sale or any conveyance that restricts the use and enjoyment of our free public parks,” according to a media statement.

“We are nearing a crisis in parks funding,” said Jim Goulee, president of the all-volunteer POP. “We funded stadiums and arenas, and now it’s ‘our turn’ for parks funding,” he said. “Our parks are critical to quality of life in Milwaukee County. The parks and trails that make up our ‘emerald necklace’ must be preserved, enhanced and protected.” Goulee worked for Milwaukee County Parks for 33 years and served as the Park People’s executive director for 11 years before retiring last year.

Parks funding has drastically declined over the past three decades—from about $45 million to about $35 million in the 2018 Milwaukee County budget. Goulee noted that, while the county budget has nearly doubled since 1986, parks funding has dropped to a level where it is only 4.27% of the county tax levy, down from 29% in 1986. “If parks funding had kept pace with inflation, it would be about $110 million, or three times the current level,” said Goulee.

Patricia Jursik, a Preserve Our Parks board member and retired Milwaukee County supervisor, told forum attendees: “It’s a false narrative that there is no way to provide adequate taxpayer funding for the county’s parks. Elected representatives are allowing private firms to strip-mine public taxes for private gain. This strip-mining puts public parks in the ruts of devastation.”

Goulee says it’s important to apply pressure to county policymakers as the 2019 operating and capital budgets are proposed by the county executive’s office and then reviewed by the county board in early fall. He added that state lawmakers have worsened the situation by cutting shared revenue to local governments and have also placed onerous limits on how counties can increase their tax levies, thus strapping local governments. “We can’t let county and state officials cast a blind eye toward the continuing decay of our parks,” Goulee said.

Supervisor Jason Haas—chairman of the Milwaukee County Board Parks, Energy and Environment Committee—told the Shepherd that he is “more hopeful than ever that the board can work with Chris Abele to try to get state legislators to enact legislation that would enable more stable funding for our parks,” such as through a sales tax at least partially dedicated to supporting parks.

The POP’s petition also opposes what Goulee described as “the county executive’s wrong-headed idea to place parking meters in parks. That is simply unacceptable because it limits access.” Abele’s spokesperson did not respond to questions about the 2019 budget, including whether he might call for paid parking in parks. (When Abele announced in February that he was pulling his paid-parking proposal, he stressed it was only “for this year.”)

The petition drive will run throughout the summer. POP board members are also meeting with county officials, including Abele, supervisors and county staff, as well as state legislators. Goulee also invites interested groups to contact POP through its website about arranging a presentation or to download the petition.

Guy Smith’s appointment as Milwaukee County Parks Director was approved unanimously by the county board on Thursday, June 21, following months of departmental turmoil. After John Dargle Jr. resigned abruptly last November, Abele’s appointment of Jim Sullivan—a county bureaucrat with no experience managing parks—was rejected by the board. Smith, 37, has worked nearly 14 years for Milwaukee County Parks, most recently as operations manager and interim director. He has been publicly praised by people who have worked with him, including county supervisors. Smith responded by email to questions about his plans for county parks.

Smith’s first priority “is and has been to focus on health and human safety. I work with our parks team as well as county architecture and engineering staff to prioritize our capital projects and major maintenance projects.” He said he’s used to “doing the best we can with what we have…since demand is always greater than the available resources.” That’s an understatement. Parks’ capital needs reportedly total about $250 million, and the 2018 capital budget was a paltry $2.8 million.

Maintaining the parks’ physical environment is Smith’s second priority. That includes addressing the emerald ash borer, which is killing or threatening thousands of ash trees. Staff are removing ash trees near high-traffic areas, such as playgrounds and trails, and replacing them with a diverse mixture of native tree and other plant species.

“Working with our partners—including friends’ groups, nonprofits, corporate entities and other public agencies” is third on Smith’s priority list, which, he said, “help us expand programming, fundraising, education and recreation opportunities.” That includes collaborating with Milwaukee Public Schools and the City of Milwaukee “to share best management practices and discuss strategies with respect to programming, physical infrastructure and more.”

Smith acknowledged that, “access to parks and programming is always a challenge, and one way we are working to address equity challenges is through partnerships.” He cited relationships with “organizations like Lake Valley Camp, the Urban Ecology Center, Boys and Girls Club, PeppNation, Ramp UP MKE, Milwaukee Kickers and many others.” He also cited increasing “sponsorships that enhance parks, while supporting the bottom-line and promotion of parks and programs through digital and social media.”

The Trust for Public Land has calculated the total value of volunteer hours invested in all parks within Milwaukee’s city limits at $5 million annually. McCabe says that “huge” figure reflects great civic pride and commitment. Nonetheless, Goulee stressed that volunteerism and other partnerships alone cannot possibly solve the chronic and overwhelming budgetary shortfalls.

“This critical situation can only be addressed with secure, stable and dedicated parks funding,” Goulee said, adding: “We need to do better. We can’t just let our parks crumble or let this emerald necklace unravel.” 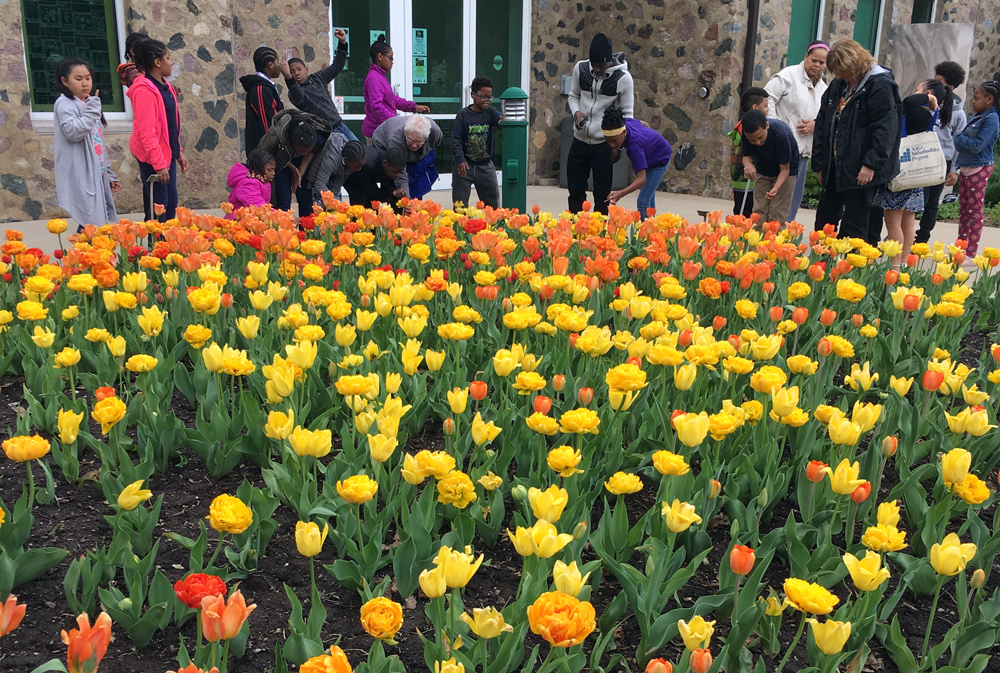 This article was first published in the Shepherd Express on June 26, 2018.

Virginia Small is a freelance writer and veteran journalist.

Photographs by Eddee Daniel, Preserve Our Parks board member and A Wealth of Nature project director.