Late Night in the Menomonee Valley

When I started Brew City Safari six years ago it became a Zen-like method of dealing with inner turmoil. Walking with no clear destination; letting my path be my guide. The very first hike started near my home in West Allis. I made my way through Milwaukee’s South Side and, by some miracle, ended up on Brady Street. I capped off the 8-mile adventure with a stiff drink.

As more excursions followed they took on a kind of Forrest Gump life of their own and I soon found a mob of people at my back, joining me in exploring this amazing city we live in. For five years my journey went on, taking new paths and meeting interesting people. A year ago, unfortunately, other responsibilities forced me to put away my hiking boots.

Earlier this summer, I ran into an old friend who asked, “when are we hiking again?” With everything going on in my life, I laughed, said “Dunno, sometime next year” and shrugged it off. The story would have ended there, except the exact same thing happened about six more times with six different people. My “retirement,” it seemed, had been premature.

Cut to three a.m. on a recent and dreary night. A group of us have assembled in a parking lot on Hawley Road, despite a downpour. It seems to be monsoon season here in Cream City, with no end in sight. But here we are and it is perfect weather for a trek into the dark. Luckily, misery loves company! Our party consists of eight people and two dachshunds. We poncho up the pooches, break out umbrellas and head onto the Hank Aaron State Trail. 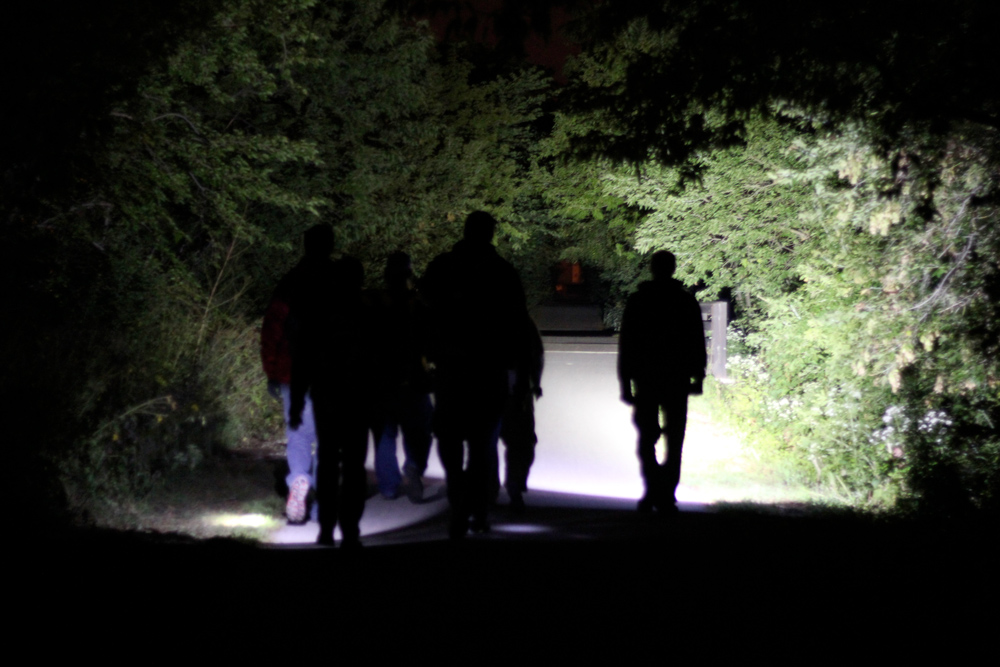 In predawn darkness the Hank Aaron State Trail is not what you might expect, such as Law and Order type scenarios where criminals dispose of, or create, evidence in the pitch black of the trail. In reality, the worst thing we’ve experienced on this particular excursion was a skunk who eagerly scurried back into the darkness. And that darkness is intense. It’s easy to forget how much we rely on street lights at night. But here, in places, the city lights can be overwhelmed by the trail’s greenery. Add the steady rain and it feels much less like an urban bike path and more like an elusive great midwestern rain forest!

After a while, the scenery starts to gets a bit more urban in character. With barbed wire fences and decaying buildings, it seems as if you’ve stumbled onto a place that time forgot. The light on a warehouse is blinding and then you step into a Civil War era village. We make our way past Ward Memorial Hall, heading off the trail and up towards Old Main, the most imposing structure in the Soldiers Home complex.

Several of our group comment on how spooky the old building is, particularly as there are a few lights on in the top floors. Those lit up windows light up our imaginations and we turn away wondering what is actually there. We rest at the fountain sandwiched between this marvel of antique architecture and the behemoth of Miller Park.

Pressing onward we find our way down to Miller Park. Late night workers scramble back and forth, preparing for the incoming assault later in the day. AM Radio blasts from a WTMJ trailer, echoing off the stadium. Some of us peek inside the empty stadium. As the rain picks up, we consider taking shelter. But we’ve come this far; we decide to press on. 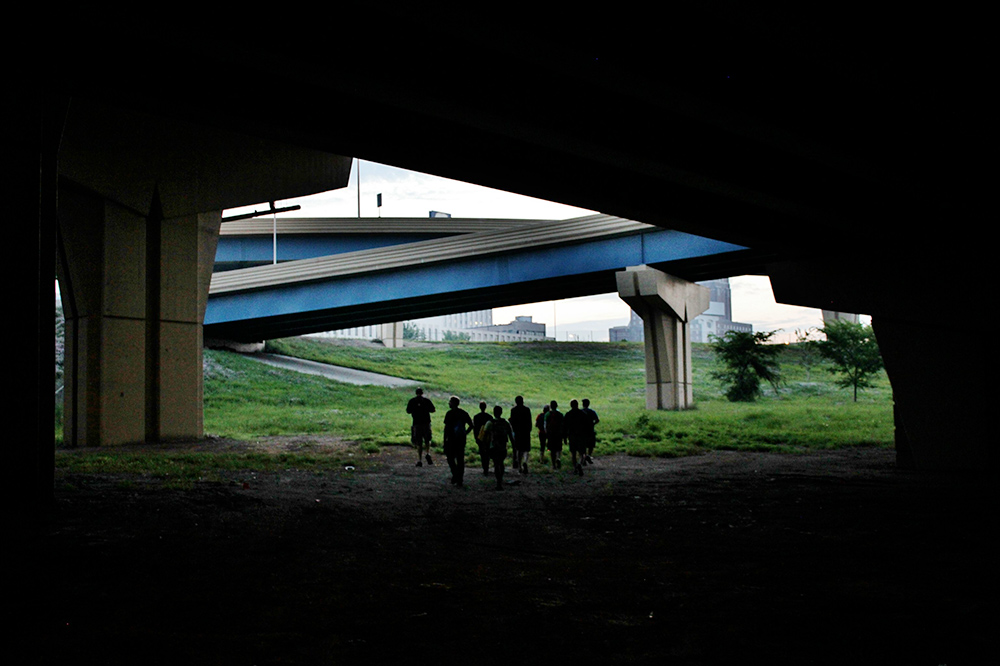 We come to the main stretch: Menomonee Valley. It’s easy to forget what Menomonee Valley once meant to our city, before then Mayor John Norquist gave it a second chance. Rust Belt through and through. The stairways going up to the 16th and 35th street viaducts always remind me of Chicago. To me, the Valley is a symphony of what Milwaukee is: half nature/half city.

Car after car sits idle on the Canadian Pacific rail lines, complemented by a flock of Canada Geese that have settled in amongst them for the night. Our northern neighbors making a pit stop before the next destination on their great migration. They remind us how alone we are at this time of night—until we reach Potawatomi Bingo & Casino. 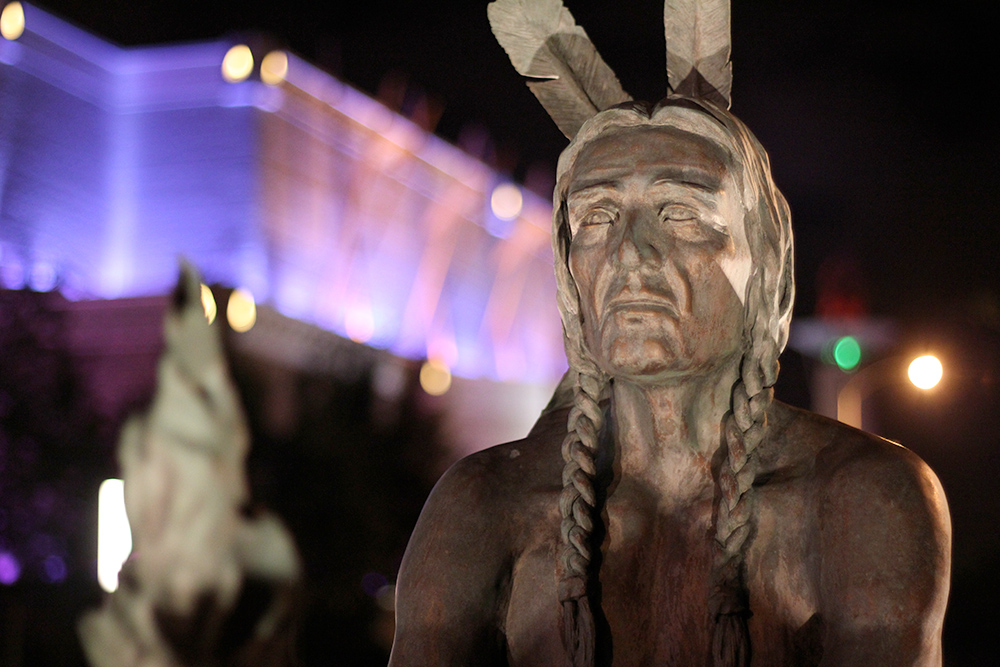 If the city has a pulse at three a.m., you can feel it here at the casino. From the well-dressed to the down on their luck. We see a veritable buffet of people making their way in and out. The valets chat with one another as late-night gamblers step outside for fresh air. Conversations that we are tempted to share except for the raised eyebrows of the casino security.

At this point our usual route would take us under the Marquette Interchange. There’s something mesmerizing about being so miniscule in the face of something so enormous. It’s like entering a redwood forest of concrete and steel, scuffling underneath it like a common bridge troll. But this time we change our route. We leave the trail and the Valley via the 16th Street viaduct and into the Marquette University campus.

The city is beginning to wake up now. A few responsible students scurry by, getting a head start on whatever projects they’re working on. Thoroughly soaked at this point, we huddle at a Starbucks to warm up for the last leg. Wisconsin Avenue, on an early morning in fall, is like walking through a wind tunnel. The rain comes in sideways; umbrellas turn inside out. We close them up as we get closer to the lake. 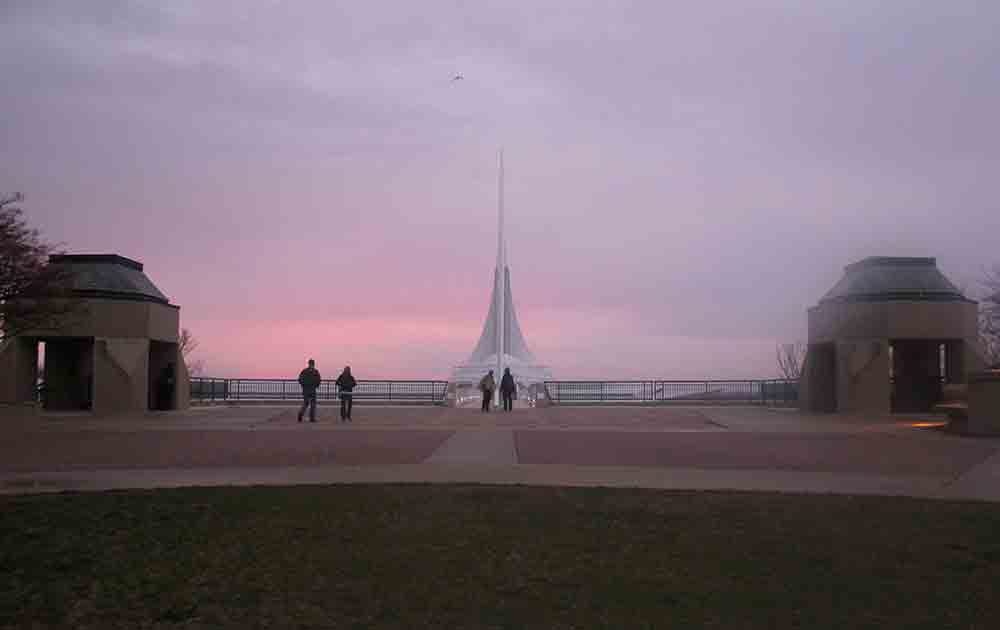 The sun is rising invisibly, due to the overcast. A sunrise is always a nice bonus, nature’s fireworks I say, but the journey is its own reward. My body’s aches and pains the next day are its way of saying I need more exercise. There will be more opportunities in the future. More paths to explore and more new friends to explore it with.

Christian Alvirez is the founder of Brew City Safari, a local group that focuses on urban hiking in the Milwaukee area. He plans on hunkering down in his West Allis home for the winter, plotting more adventures in the Milwaukee Area for 2019. (They won’t all happen at night!) More information about Brew City Safari and future hikes can be found on his Facebook Page: https://www.facebook.com/brewcitysafari

Matthew Evan Balz is a regular Brew City Safari participant and photographer who, in the writer’s opinion, perfectly captures the pulse of Milwaukee through his lens. You can find more of his work on his tumblr page: https://matthew-evan-balz.tumblr.com/. (Note: due to the inclement weather, Matthew was unable to take any quality photos during this hike. All photos accompanying this story were shot on previous hikes in 2014 and 2015.)

Full disclosure: Although neither Alvirez nor Balz is associated with the organization, Friends of the Hank Aaron State Trail is a project partner of A Wealth of Nature.