By Emilie Burmeister and Julia Robson

On a chilly evening in late March a group of eager volunteers gather at a park in Waukesha County for their final phase of wetland monitoring training. They methodically rehearse procedures for checking the aquatic funnel traps that they will be permitted to use in local wetlands to capture and document species of salamanders, crayfish, frogs and toads. 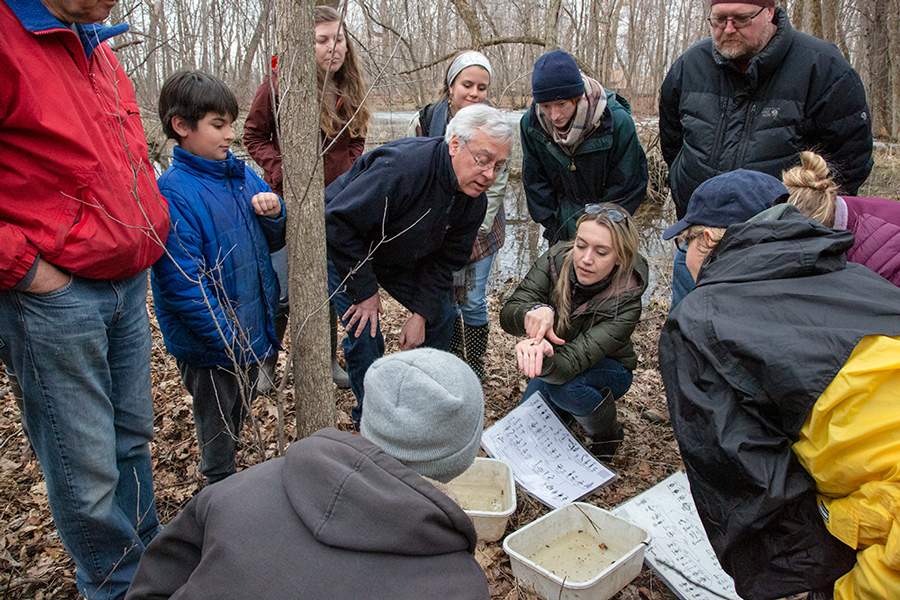 We scoop water from the ephemeral pond that is being studied for the training and they practice identifying the tiny creatures—macroinvertebrates—that we see in the bucket. Then we check each of the traps that has been placed in the pond. Excitement builds as we count three, five, seven salamanders. Then one of the traps yields over sixty salamanders! Included amongst the nestled mass is a rather uncommon species, the spotted salamander. 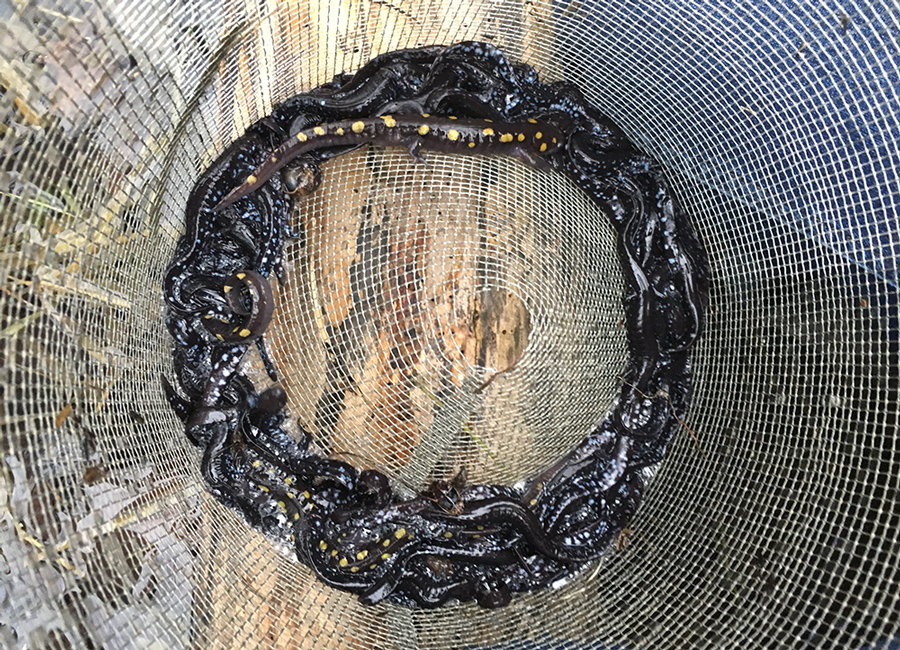 Sixty-some salamanders in the bottom of a trap

Intrigue and enthusiasm radiate from the group along with an eagerness to begin their own sampling at their assigned wetlands. These volunteers have joined a corps of 73 other community members that will dedicate hundreds of hours of their time this spring monitoring local wetlands throughout Waukesha County. 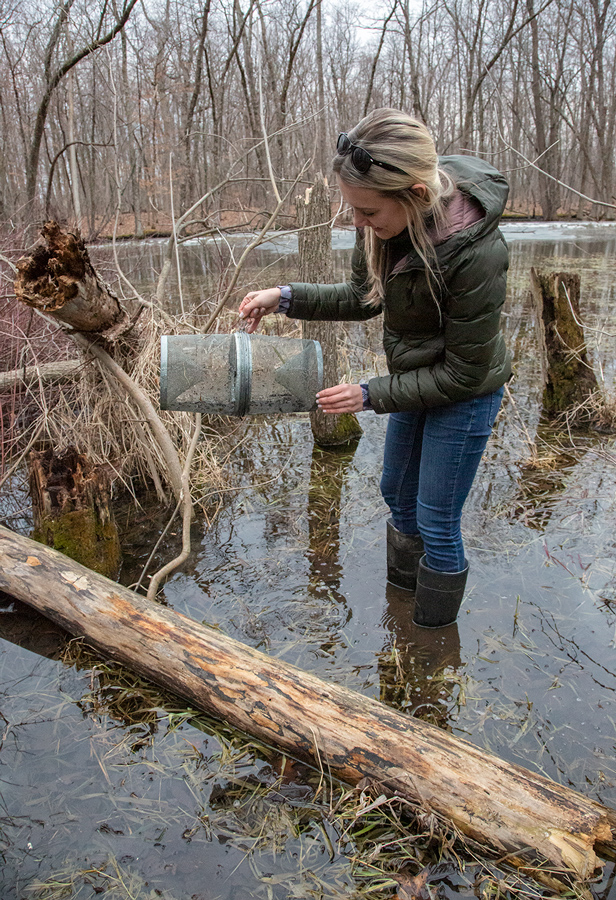 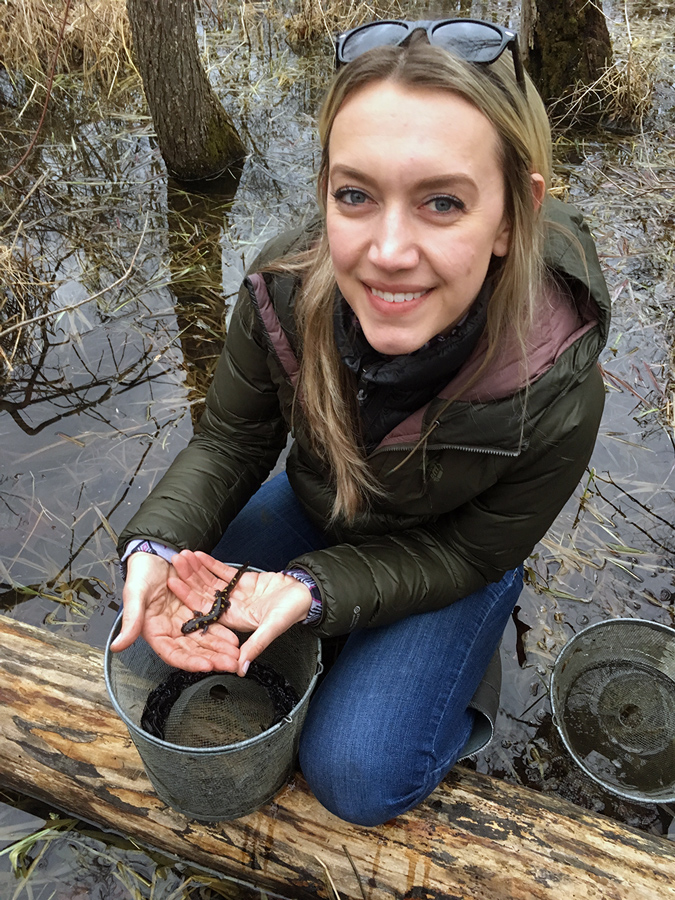 Wetland monitoring is a citizen science program run in Milwaukee and Waukesha Counties with the goal of assessing, protecting and enhancing the diversity of native species in their respective wetland areas. Volunteers participating in the program come from all walks of life, from families, retirees, home school groups, high school environmental clubs, to grandparents and their grandchildren; it’s a “one size fits all” opportunity that engages the general public in science within their community.

Waukesha County Parks officially launched its first-ever community-based monitoring program in 2019, with support from the Friends of Retzer Nature Center. Volunteers were enlisted and trained to assist in collecting vital data on flora and fauna found within the park system’s ecologically diverse natural areas. The data collected by these volunteers will ultimately assist the Parks Department in making sure that common species remain common and that rare, threatened, and endangered species are protected within the park system’s natural areas.

The wetland monitoring program was the first County Parks project to launch in early spring and has been running full steam ahead since the completion of the trainings in late March. To date, volunteers have contributed over 400 hours of monitoring at over 40 sites within the county. Perhaps most impressive, is the list of species being documented thus far including wood frogs, spring peepers, Cope’s gray tree frogs, tiger salamanders, blue-spotted salamanders, and even Blanding’s turtles. 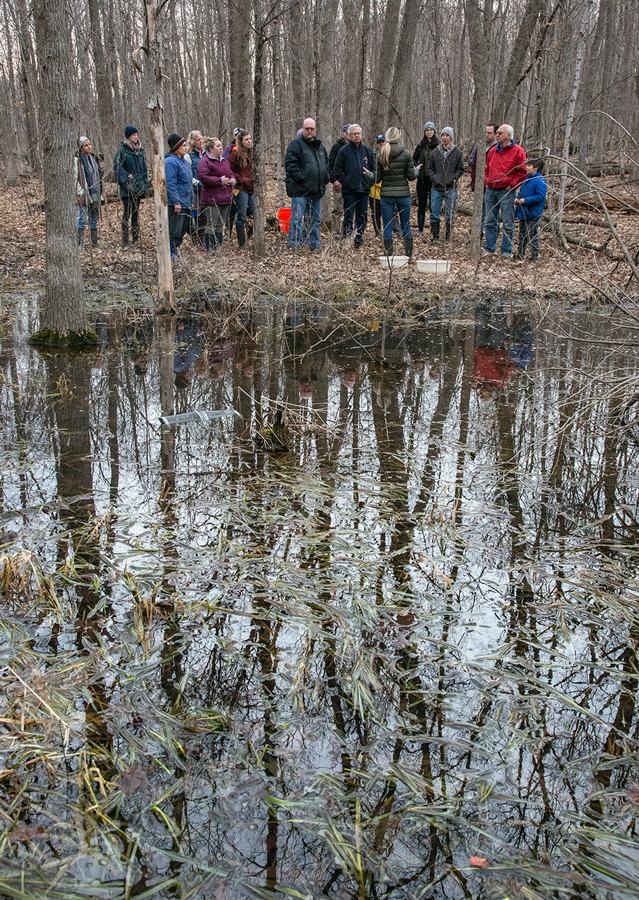 Group of volunteers at the training wetland

Volunteers are also assisting other conservation-related organizations that own and manage natural areas in Waukesha County with data collection, including the Waukesha County Land Conservancy and The Nature Conservancy. The volunteers will continue to rigorously survey their assigned wetland sites until mid-July when they will return their equipment and submit their final reports and findings. 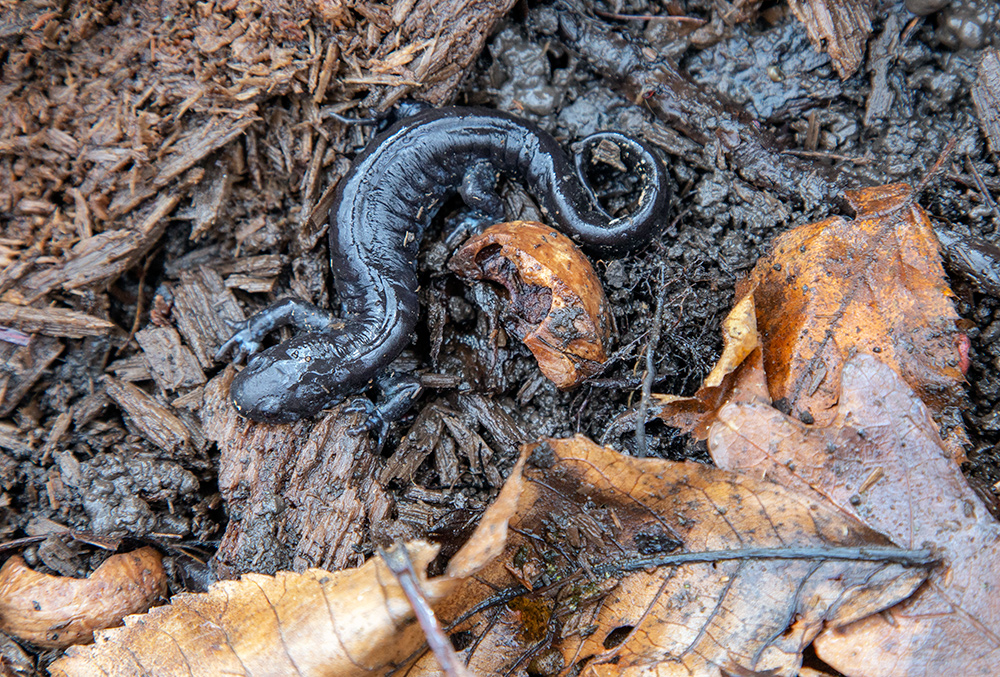 In Milwaukee County the Wetland Monitoring Program was established in 2015. Since its creation, over 200 volunteer wetland monitors have donated over 5,000 hours in these efforts. From ephemeral ponds to larger marshes and lagoons, active monitoring has resulted in the discovery of species of local and regional concern and has equipped resource managers with the ability to act on these findings. 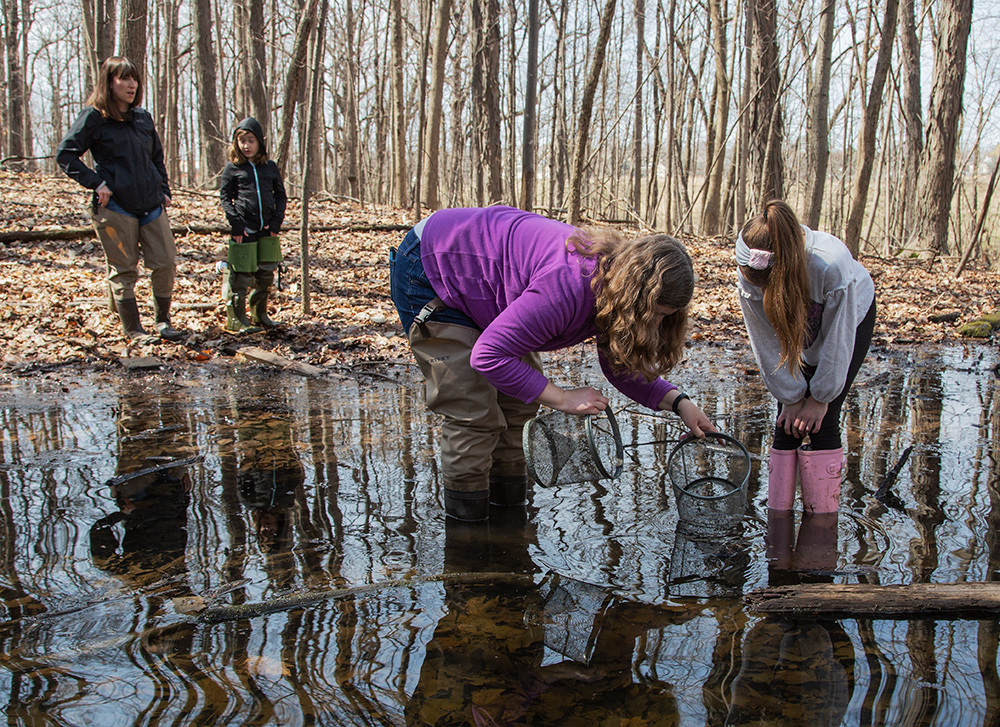 Assessing the health of our wetlands both in terms of habitat availability and the presence of wildlife is critical when protecting current wildlife and focusing on future restoration projects. Wetland monitoring has also provided a unique opportunity for residents to connect with natural areas, tapping into the potential for community involvement and strengthening their commitment to conservation both locally and beyond. 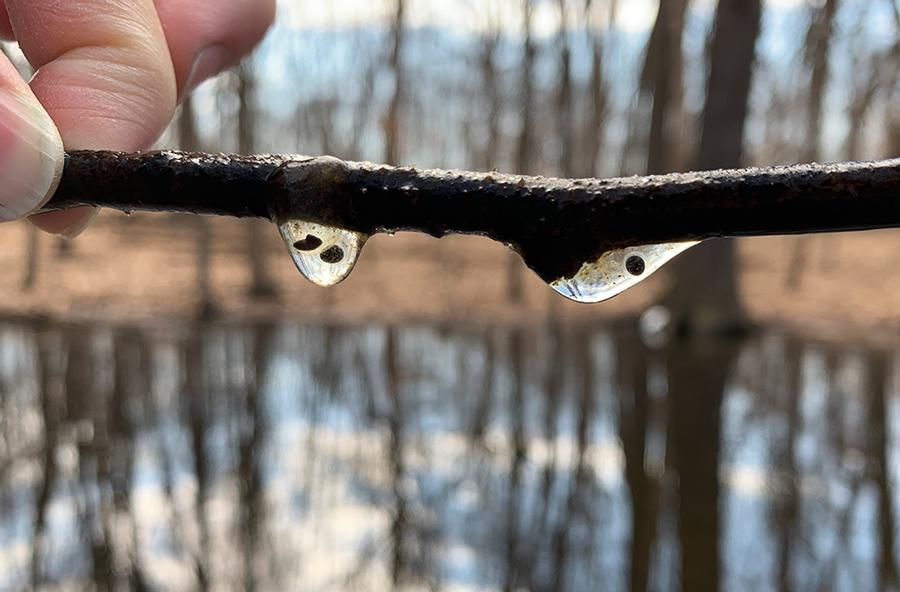 A large percentage of monitors are those who have returned year after year, but this is the first year for monitors Jess and her daughters Iva (who wants to be a marine biologist one day) and Aramae. They have been assigned to monitor an ephemeral pond within Barloga Woods. First Jess conducts an amphibian egg mass survey. She slowly walks the perimeter of the pond looking for any frog or salamander egg masses, recording any findings, and gently placing anything she finds right back in its place. 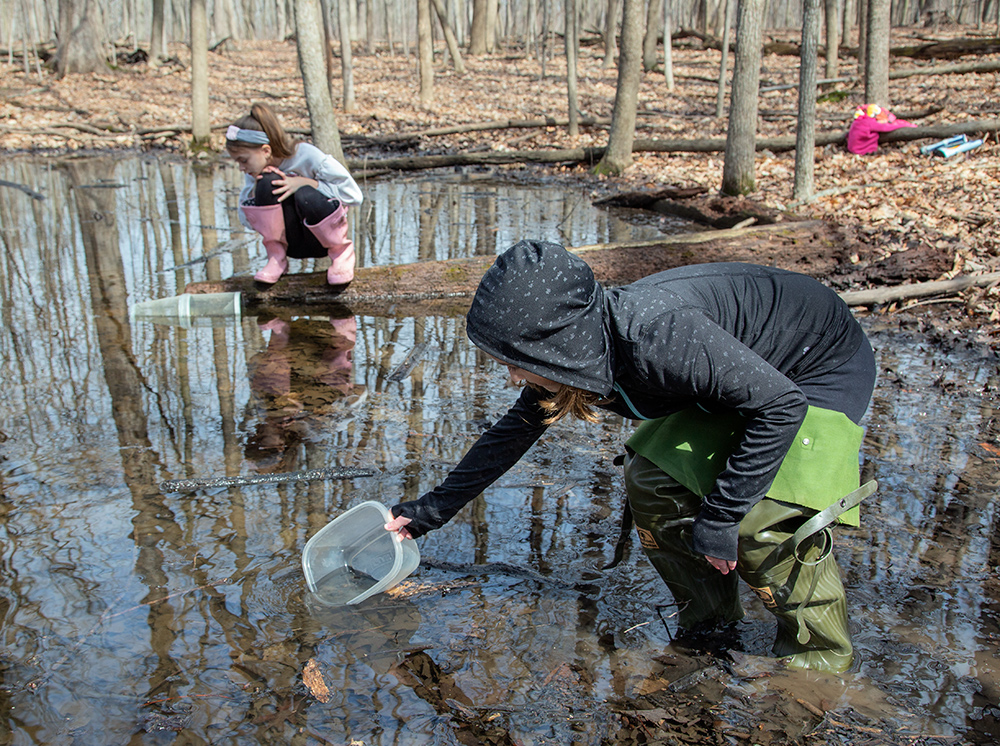 Next, it’s time for a scoop sample using a “highly scientific” piece of Tupperware dunked into the water. This method is used in documenting macroinvertebrates like daphnia and copepods which are identified using a dichotomous key and checked off a list. Then they are placed back into the water. 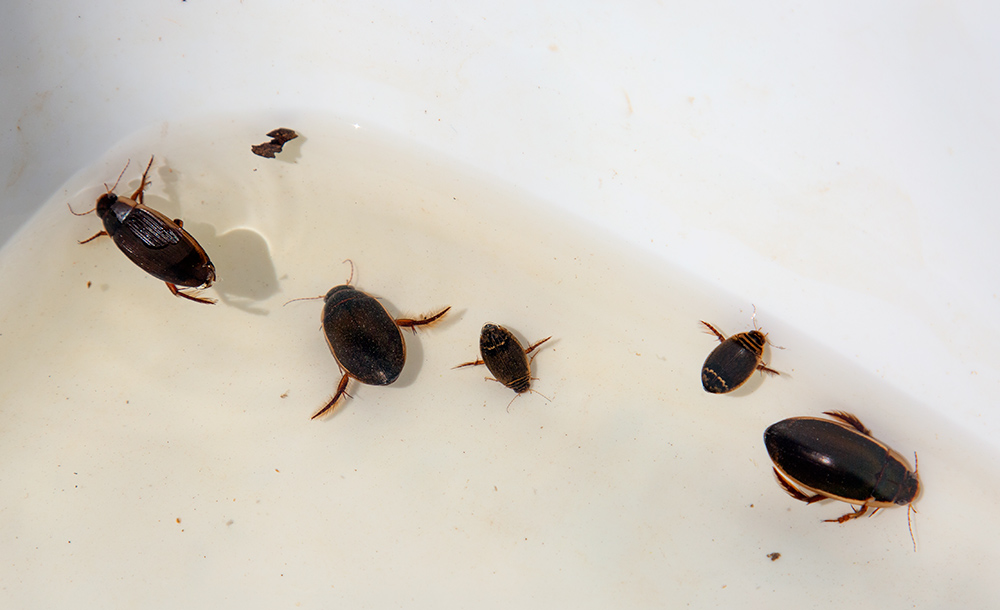 Lastly, they check their aquatic funnel traps. These fine-meshed minnow traps were placed the day before all around the pond but especially next to any down debris such as logs, which make a natural fence to guide species into the traps. These traps are safely used to capture larger amphibians like salamanders, frogs, and the occasional fish. 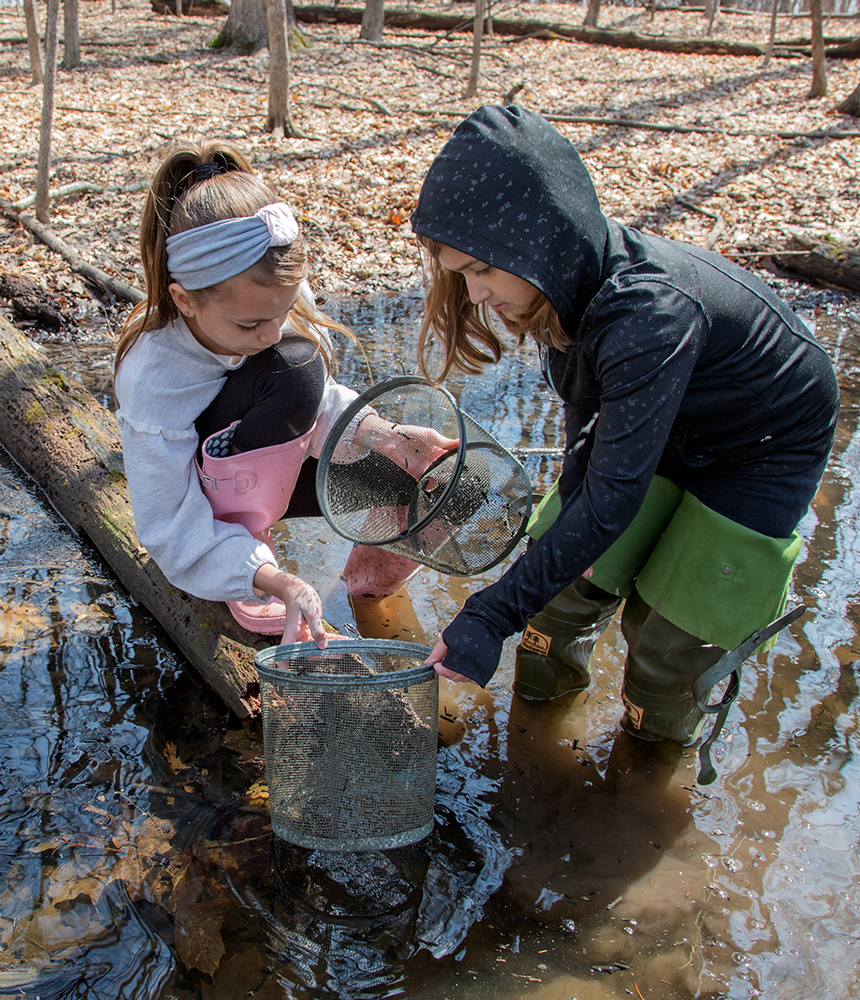 Aramae and Iva open a trap

Jess, Aramae and Iva carefully open each trap, document any species found, empty the contents back into the pond, and then place the traps in the same place to be checked the next day. On this day, they find mostly predacious diving beetles in their traps, but on previous sessions they have also found blue-spotted salamanders and chorus frogs.

Trapping sessions last for four to five days in a row and monitors are asked to complete three sessions from March to May. 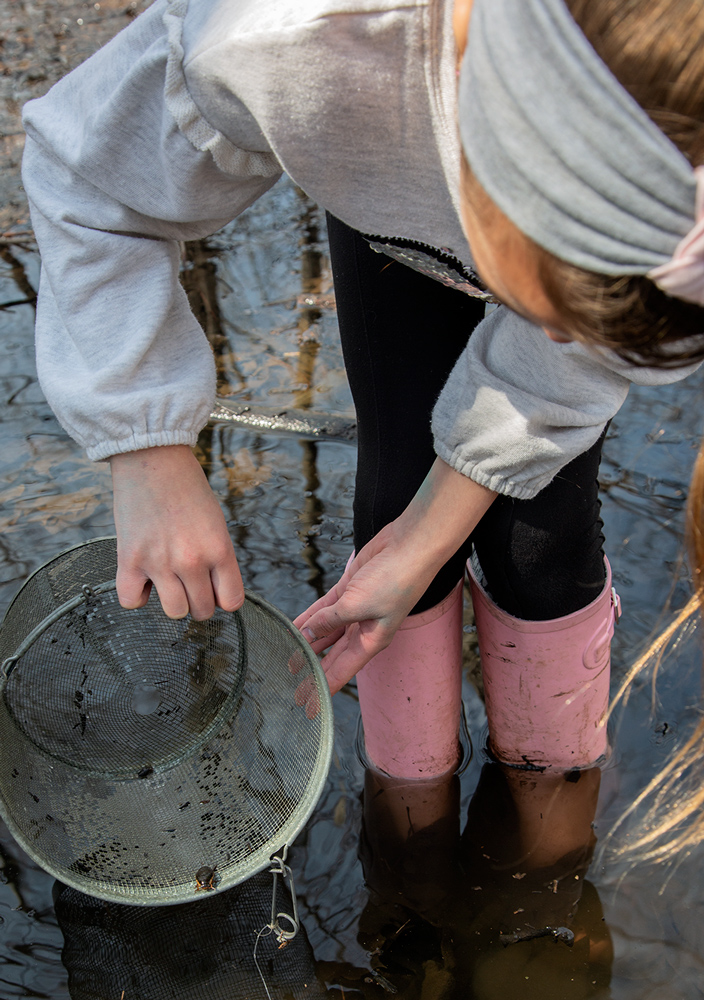 Jess, who studied conservation biology in college, offers these observations about volunteering in the monitoring program:

“Ever since I was a little kid, I have loved spending time in nature. I grew up playing outside, hiking, camping and canoeing. I love seeing kids’ joy and wonder as they make their own nature discoveries.

“The wetland monitoring program is a way for us to learn hands-on science. Our daughters are seeing exactly why these wetlands are so important for frogs, salamanders and other wildlife. It’s also a way for us to give back to our parks. We all care a lot about our Earth and want to see as many natural areas preserved as possible.” 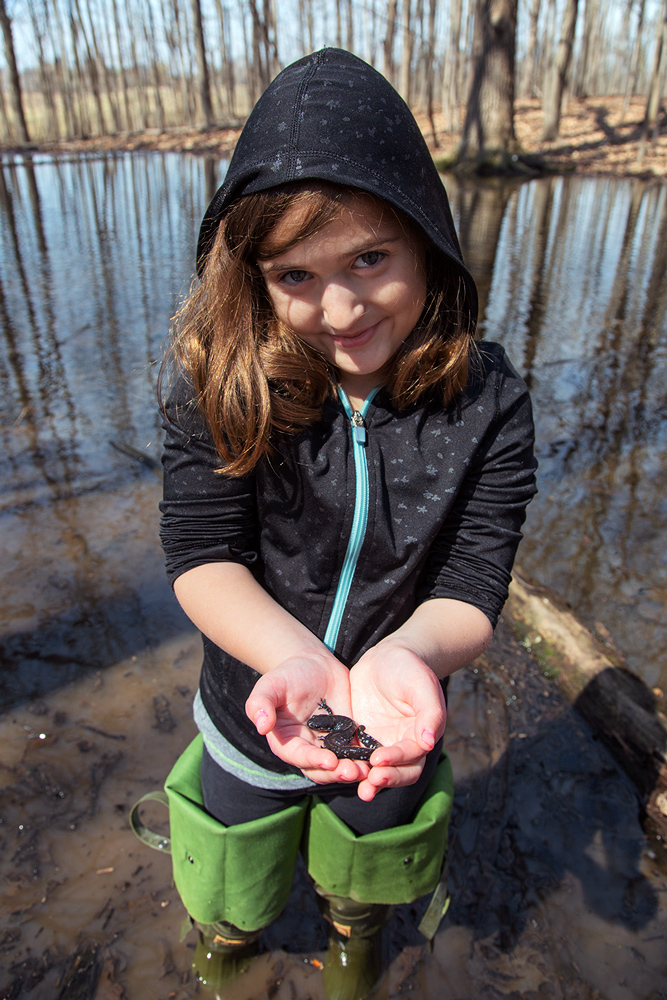 Julia Robson is Conservation Biologist for Waukesha County Department of Parks and Land Use.

Photographs by Eddee Daniel, A Wealth of Nature Project Director, except as noted.