With a stroke of luck, and a wind out of the east, the Milwaukee Metropolitan Sewerage District’s (MMSD’s) Greenseams® Program, in partnership with The Conservation Fund, got the green light on Earth Day to conduct a prescribed burn on a 50-acre restored prairie in the City of Franklin, known as the Ryan Creek Prairie. Throughout history, fire has been a natural part of life for our native prairies, shaping the landscape and encouraging plant and animal diversity. Grasslands in the Midwest still depend on periodic fires to rejuvenate growth and ensure their long-term survival.

Replicating the hand of nature

Prairies are a unique ecosystem characterized by tall grasses, little tree cover, and diverse wildlife. Prior to modern civilization, fire was a natural management tool that helped revitalize native grasslands. Fire transforms dead plant material into soil nutrients and reduces competition from invasive species. Today, burning is still recognized as an essential tool to preserve very delicate and important native ecosystems that are becoming increasingly more rare. Prescribed burns are used to mimic natural processes with the goal of reestablishing the native species and habitat. 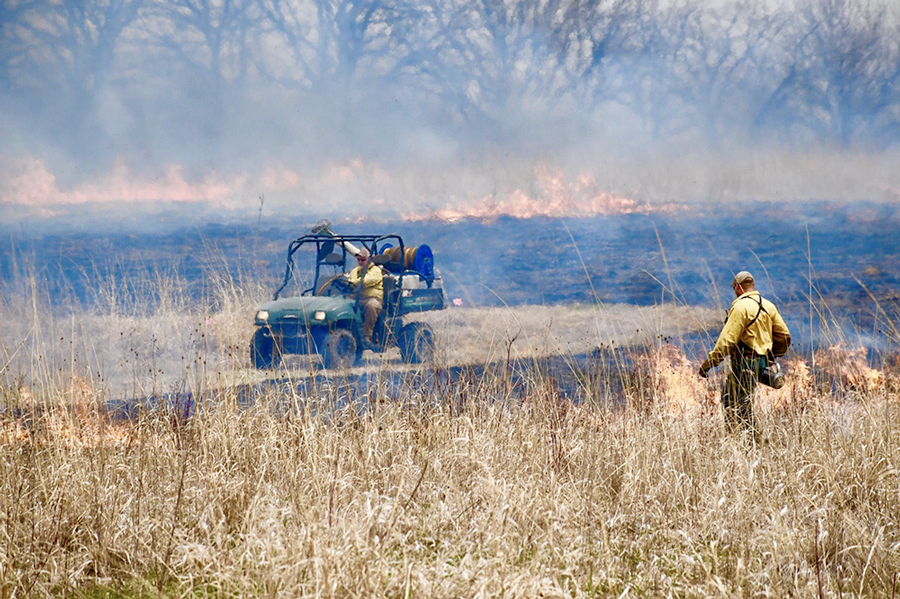 Why is fire used as a management tool?

“Many woody species are not adapted to fire, so thin bark species like dogwood, willow, or maple are susceptible to injury or death from fire, which makes burning a good management tool. Some species, like oaks, have thick bark which protects them from lower intensity fires. Fire, through the heat it generates, destroys the cambium layer (growth layer making new cells during the growing season) in the tree, thereby not allowing it to transport food and water which kills it or sets it back to the point where it has to re-sprout from the root reserves.” – Peter Ziegler, EC3

Another burn for the books

A prescribed burn is done by trained professionals under a very specific set of weather conditions, limiting the scheduling of a burn to no more than one day in advance. April 22, Earth Day, conditions were perfect and Greenseams® staff were given the thumbs up from the Franklin fire department to go ahead with the burn. EC3 Environmental Consulting Group, Inc., a team of natural restoration experts, managed and implemented the burn plan on Ryan Creek Prairie, making it the third successful burn for the Program, totaling over 180 acres of invigorated prairie.

How do the three Greenseams® prairie burns compare?

“They were similar in the vegetation (fuel) component, none were very dense or thick, and the goals were similar in reducing woodies (woody vegetation) and rejuvenating the natives. Complexity differed. The Little Menomonee Prairie was simple – it was pretty square and flat and broken into 2 units. The Germantown Wilderness Prairie was more complex from the unusual shape of the unit and standing water on the burn break. This did not allow equipment access and it also was spotty due to wetness in the interior wetlands and sparse vegetation. Ryan Creek Prairie was a slow burn due to the need to protect the oak saplings from a higher intensity fire, but it burned really cleanly and hot within the unit consuming all material available.” – Peter Ziegler, EC3 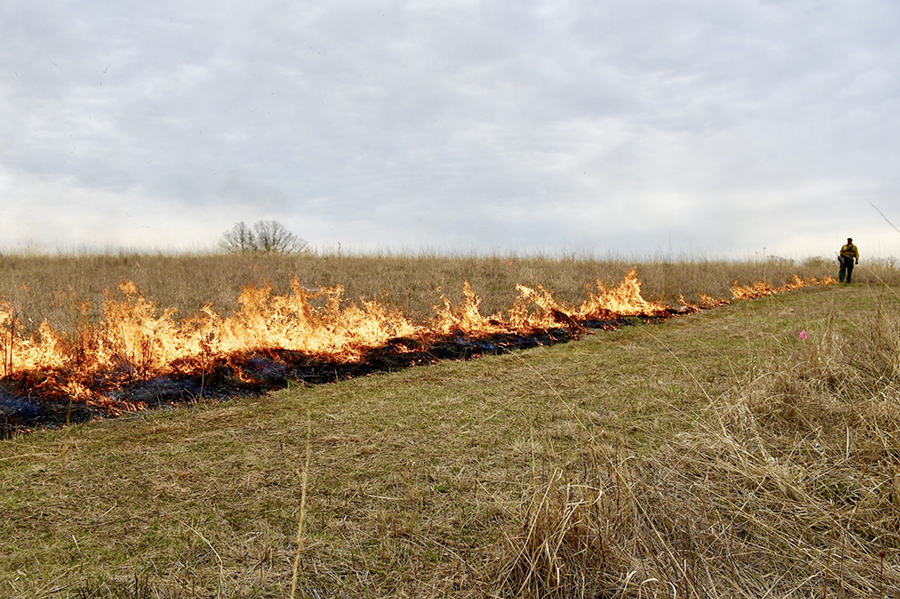 Fire being ignited along firebreak

Firebreaks, or burn breaks, are an important element of prescribed burning. Vegetation is removed around the perimeter of the burn unit to contain the fire and ease the crew’s movement during the burn.

As a spectator watching from afar, a burn can look relatively straightforward. In reality, there is an incredible amount of work that goes into the planning and execution of a prescribed burn. Once the preparations are complete, it becomes a waiting game. A meticulous list of physical and logistical components must all line up in order to get the go ahead to burn.

Seasoned burn boss, Peter Ziegler, gives some insight into what it takes to prepare for a burn and how it is determined when to burn:

“Current fuels (vegetation) present, moisture of fuels, wind direction/velocity, relative humidity, available man power, available equipment, and potential hazards for the burn and smoke around the site all play a role in determining when to burn. A burn is planned based on things such as topography, surrounding hazards (roads, houses, livestock, etc.), site vegetation, adjacent site vegetation, and soil condition (wetness). Once a site visit in completed to determine the physical components of the burn unit, a goal for the burn area is established (example – reduce woody density by 75%) and a burn plan is written to accommodate that goal along with the physical and weather-related aspects of the burn to make it successful.” 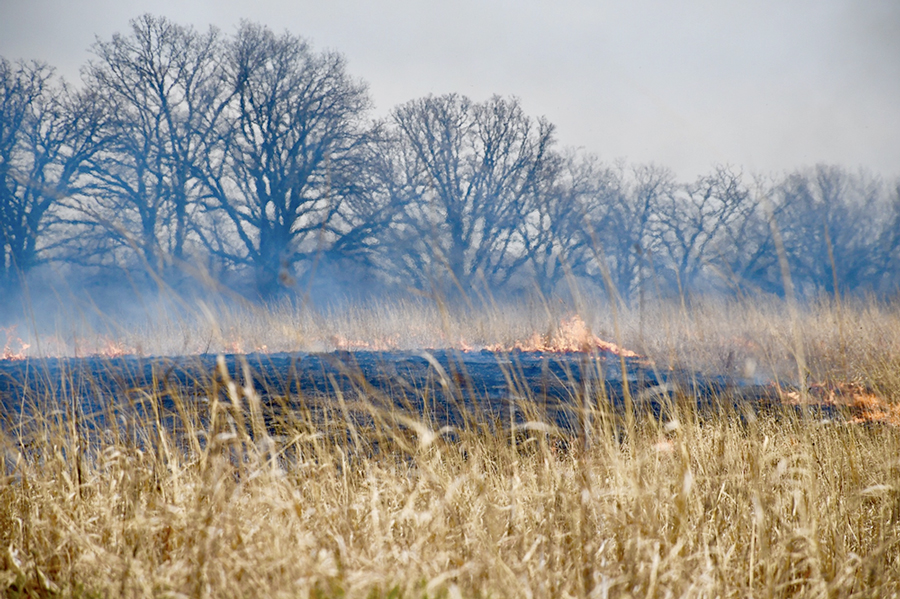 What is a burn like from the perspective of the burn team as opposed to outside spectators?

“It is much more stressful and action packed. As a spectator, you are enjoying the spectacle – you know it’s good for the habitat and it’s something you don’t see very often. As a crew, we are constantly communicating from one end to the other about position, fire intensity, progress and always keeping an eye for changes in fire and weather behavior. You are constantly concerned with smoke dispersal and watching for anything that may spot (start burning outside the fire break). There is always a wave of relief for the crew (you feel like a weight being lifted) once the unit has burned and only mop up is left to complete.”

Ryan Creek Prairie turned 10 years old this year. In 2009, as part of the Greenseams® Program, this 50-acre piece of land was taken out of agricultural production and re-established with various types of perennial prairie vegetation. The grassland bird community, in particular, has benefited from this restoration. These birds do not live in trees, so they rely on prairie habitats for nesting. Ryan Creek Prairie is now home to birds such as Eastern Meadowlark and Bobolink. Native grasslands not only provide important habitat, but also increase water absorption on the land, therefore reducing erosion and runoff which improves water quality. The benefits of these vital ecosystems go far beyond their borders. 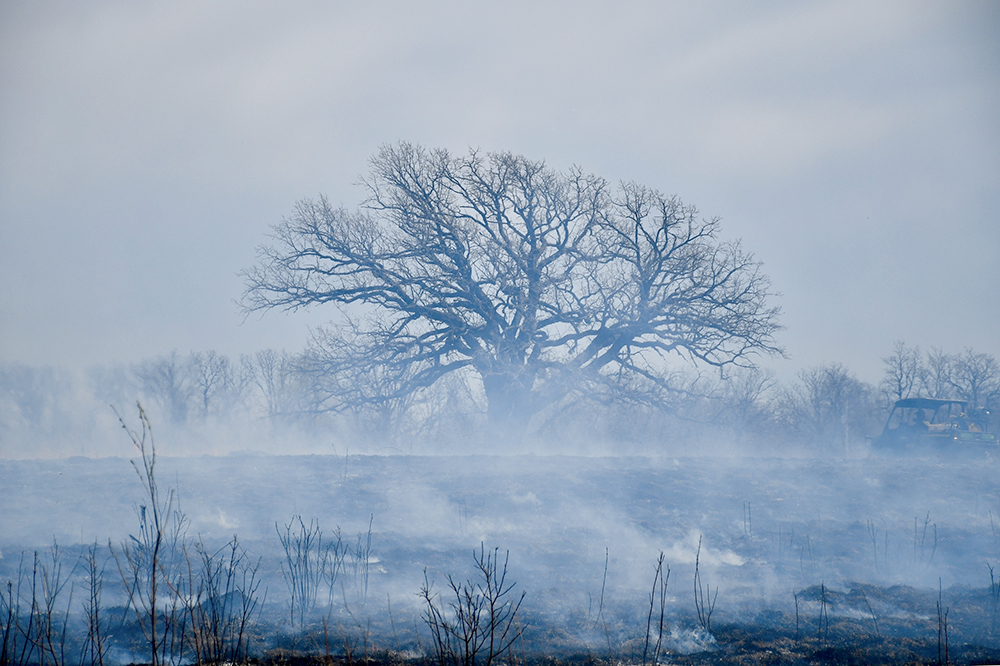 This large 200-300 year old Bur Oak Tree was unharmed by the fire, and has experienced many fires throughout its lifetime. The tree’s wide canopy indicates that it is an open grown tree, meaning it originally evolved in a prairie landscape without competition from other trees.

Text and images by Lindsey Walker, The Conservation Fund. Reprinted courtesy Milwaukee Metropolitan Sewerage District (MMSD). To read the story in its original form, click here. MMSD is a project partner of A Wealth of Nature.