The hawk in Jackson Park: A lesson learned.

In October, the class I teach at Alverno College gathered at Jackson Park. Every week we spend time in a different park or natural area around Milwaukee. When we arrived that day, a County Parks truck rolled up. The driver told us that an injured hawk had been spotted on the ground next to a tree near 43rd Street. The behavior of the hawk had prompted a neighbor to call for help. The report included several somewhat contradictory descriptions: that the hawk could not fly; it was eating a squirrel; it had a broken wing; there was something wrong with it. 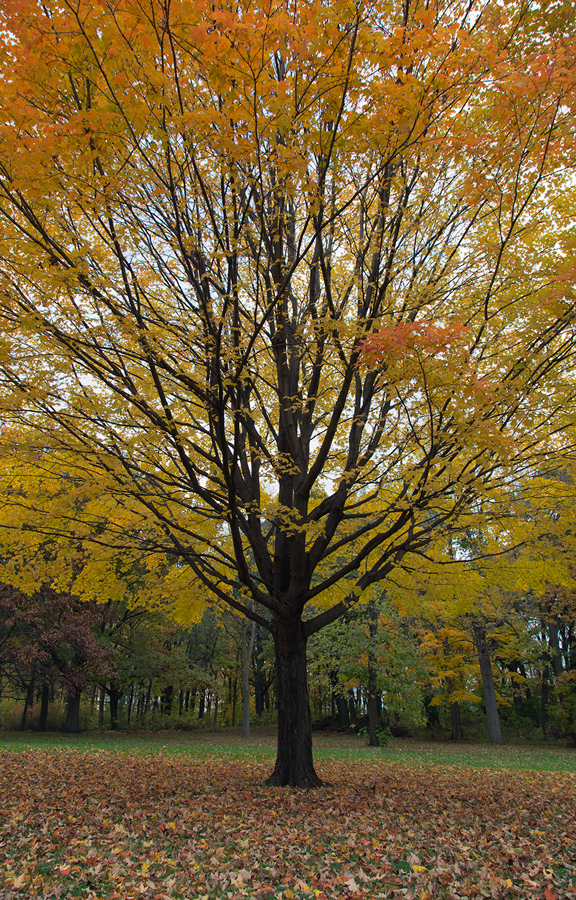 We found the hawk and took a careful look, maintaining a perimeter that gave the bird plenty of space to continue its meal. The hawk had reduced the squirrel to tufts of fur and hunks of torn flesh. The hawk appeared unconcerned by the students, who kept back along the paved path. None of us saw any signs of distress.

I have seen red-tailed hawks attack squirrels, even on the Alverno College campus. Near the main entrance, hawks frequent a stand of oaks. Once, as I watched a squirrel sprint between trees, a missile of feathered muscles landed on it with a muffled thump, talons piercing and beak twisting at the squirrel’s neck. The struggle was over in an instant.

Often, a hawk’s prey is too heavy to carry any distance. In such cases, the hawk will feed warily on the spot and may exhibit a protective behavior called mantling. It spreads its wings over the meal and may turn at odd angles. A young bird, lacking experience with humans, may resort to a limited number of protective displays in its repertoire, such as tilting backward to expose its talons or spreading a wing and extending its feathers. This could easily be mistaken for an injury.

Although it was fascinating to see, I was eager to resume our scheduled activity: distinguishing between various tree species and listening for migrating warblers. We left the hawk to its meal.

About an hour later, after dismissing my students, I walked back to check on the hawk. At first, I could find neither the bird nor the remains of the squirrel. As I circled around, a woman carrying a pet crate, a thick towel, and a net on a long pole came into the park. She was talking nonstop about how quickly she had mobilized after getting a call about an injured hawk. Where was it now and how could it have gotten away so fast?

Then, the neighbor who had placed the initial call for help walked across the street wearing a red Wisconsin Badger sweatshirt. He had learned that the municipal animal control agency would not respond: they handle domestic animals only. The Humane Society would take an injured hawk, but would not come out to collect it. If the bird was unable to fly, they had said, it would be easy to walk up, put a blanket or thick towel over the bird and put it in a large container for transport. They had contacted a volunteer, the woman with the pet crate and net.

Together, we located the squirrel carcass, and the neighbor explained what he had seen. He described the hawk sitting on the ground and said he’d assumed it had been unable to fly away. I interjected a few ideas about the feeding process for a hungry young bird, but he was adamant that it appeared injured. Not wanting to contradict him or seem argumentative, I listened and kept my eyes open. 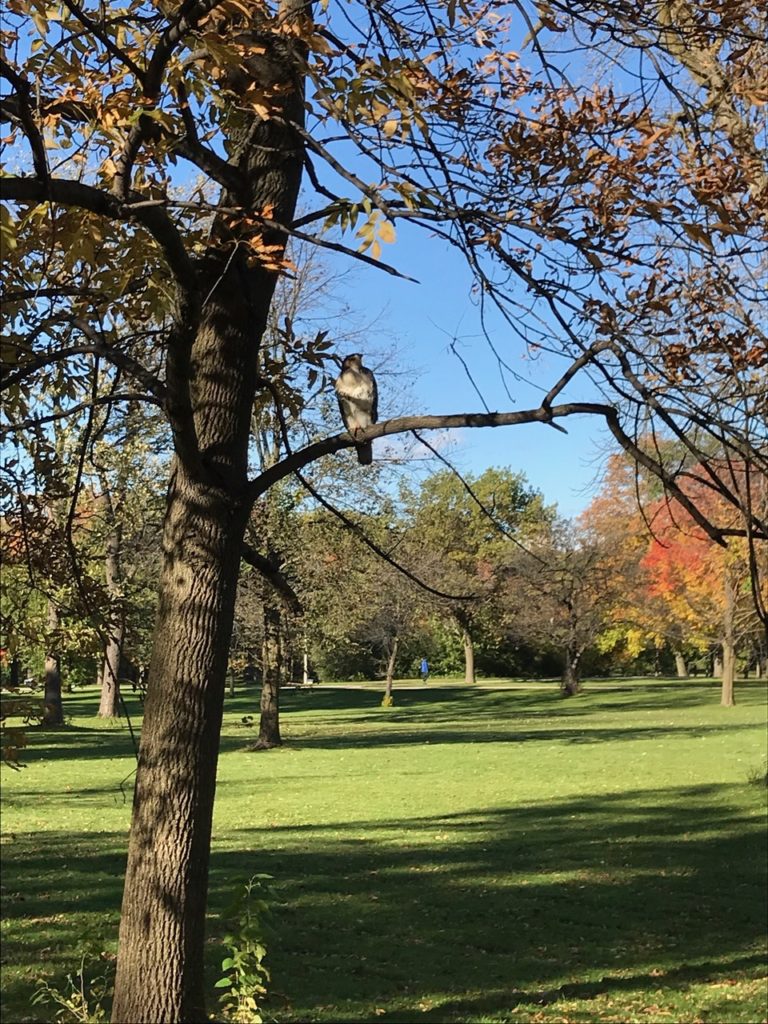 The hawk on a branch. Photo: Chris Young

Then I spotted a hawk perched on a nearby branch, about eight feet off the ground. It was a juvenile, and in my mind certainly the same bird. Healthy and fed, it had taken a break and would wait for us to depart. The neighbor and the volunteer, however, saw it differently.

For them, the immature red-tailed hawk now sitting in the tree near us was, coincidentally, another bird. This uninjured hawk was waiting after its companion with the broken wing had moved on. The woman with the pet crate said that young hawks often keep company. The neighbor was convinced that the injured hawk he had seen could not have flown to this perch.

With her long-handled net, the woman approached the tree, reaching toward the hawk. If it was injured, barely able to fly, she assumed she could easily take it into custody for transport to the Humane Society. If it was healthy and vigorous, it would fly off and leave us to our pondering.

The bird remained motionless as the net stretched closer and closer. It seemed to shrug slightly, lowering its body to avoid the contact. At the last moment, its crouch became a launch; the hawk spread its wings and dropped off the branch, avoiding the net. With a few strong beats, it flew over a hundred feet before settling on the ground. As I watched it fly, I could not help wondering if its wings were both fully intact and symmetrical in the air. Was its body strong and steady enough for a longer flight?

Since the hawk stayed on the ground after flying such a short distance, it still seemed possible to the woman with the net that it might need assistance. She had come, after all, to rescue it, and we could not yet conclude definitively that it had no injury. I followed her in the direction of the grounded bird.

This time, when she got close, the hawk flew to a picnic table and then to a nearby playground structure, once again eluding the net. (This I caught on video.) The woman was finally satisfied that it was healthy and fit enough to avoid her rescue efforts. To me, its reluctance to clear out of the area suggested that it wanted to return to the squirrel for another meal once its appetite returned. 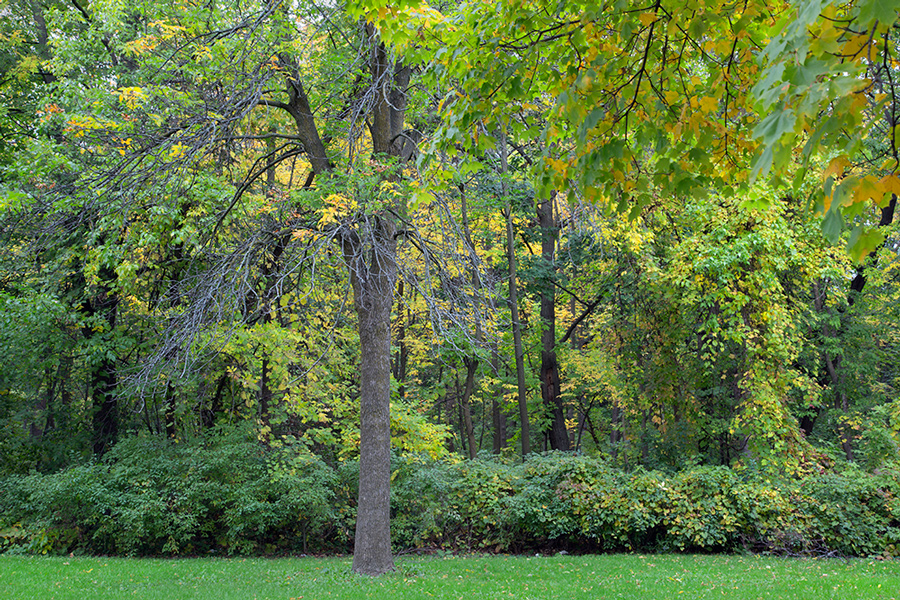 Edge of the woodland in Jackson Park. Photo: Eddee Daniel

This little adventure began with a question based on the observation of the hawk on the ground: “What is wrong with that bird?” When we see a wild animal, such as this hawk eating a squirrel, we have expectations about what constitutes natural behavior. The fact that the kill occurred only 20 feet from a sidewalk along a busy street through a residential neighborhood apparently suggested something must be wrong. But what would normal behavior be in these circumstances?

If the hawk had been stealthier in its kill and taken the meal into the cover of the wooded area a hundred yards away, it is possible no one would have seen anything. The moment of interaction between predator and prey, would—naturally—have been hidden. This, perhaps, is what we expect to see in a park: nothing, or nothing more than grass and trees—and in autumn the falling leaves. But even in the city there is so much more to nature! 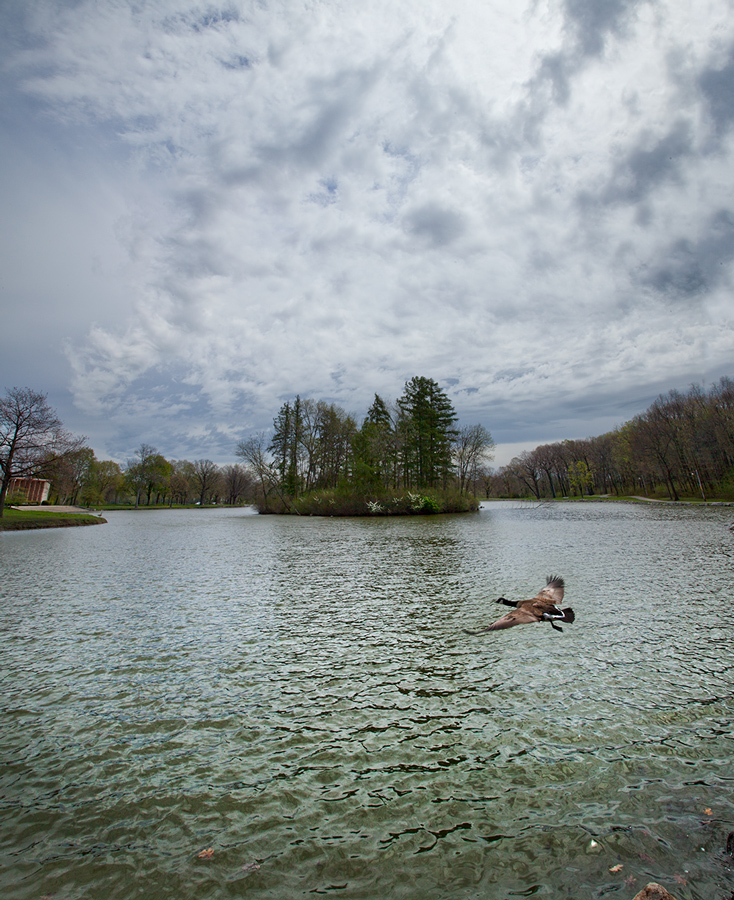 Chris Young, Ph.D., is a professor of biology at Alverno College and historian of science. He has over 20 years of experience connecting college students to nature. His books include In the Absence of Predators: Conservation and Controversy on the Kaibab Plateau and The Environment and Science: Social Impact and Interaction. He has been a teaching fellow at the Milwaukee Public Museum and is an active volunteer at the Urban Ecology Center.

Featured photo by Eddee Daniel of red-tailed hawk is from Doyne Park in Milwaukee. Eddee Daniel is a board member of Preserve Our Parks.