Cynthia Lorenz is one of 12 artists participating in a year-long residency program called ARTservancy, a collaboration between Gallery 224 in Port Washington and the Ozaukee Washington Land Trust. Each artist has selected an OWLT preserve to spend time in and to engage with. To read more about the artist in residency program, click here.

The work that I am doing as Artist in Residence at Huiras Lake State Natural Area is part of an on-going series of drawings and mixed media that began around twenty-two years ago, after I suffered a mild traumatic brain injury from an electrocution.

It wasn’t so much a stroke of creative insight but rather more of an impulse to make marks, I suppose. It took a while after the accident before I was able to be up and around. At first, I started to scratch the paint off one of the china cabinet doors in my studio apartment with my thumb; a repetitive action that must have been soothing to me. At some point a pen was placed in my hand (my mother and a few of my friends were taking turns staying with me) and I started banging dots onto paper. 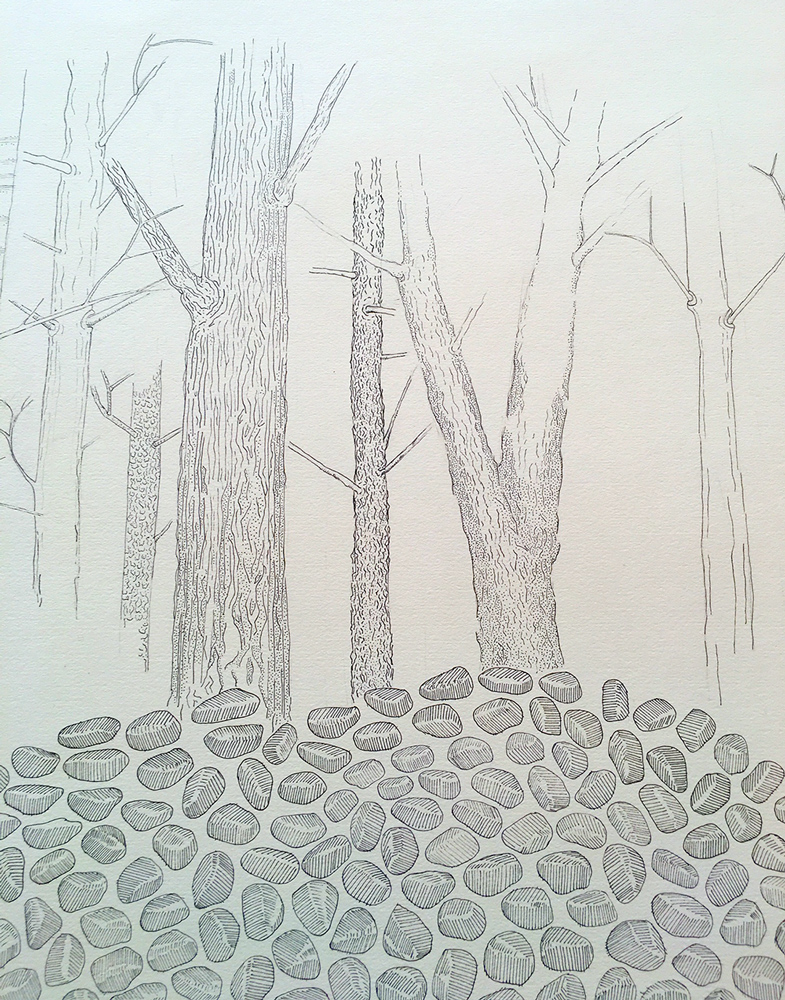 Previously I had been a painter and mostly used large brush strokes with lots of color or large Japanese ink brushes on used photographer’s backdrop paper. After the injury I started noticing, and became fascinated by, details. So many details it seemed that I was seeing things I’d never seen before or simply hadn’t noticed. My brain had a difficult time filtering the information, so all these colors, sounds, smells, patterns, etc. flooded in at once!

My brain functions were all over the place and I believed something unseen that was separate from my brain function was keeping me alive. Sounds a little dramatic, I know, but I still have a hard time figuring out what was happening through this process. There was a time when I wasn’t even aware of what was happening to me, but somehow I kept going. From that time on, and to this day, I’ve been fascinated by what I can’t see. My art has changed over time as I’ve drawn increasingly smaller details in black pen.

This led me into my current practice, which involves combining photos and drawings. I often end up using several layers in a finished work. 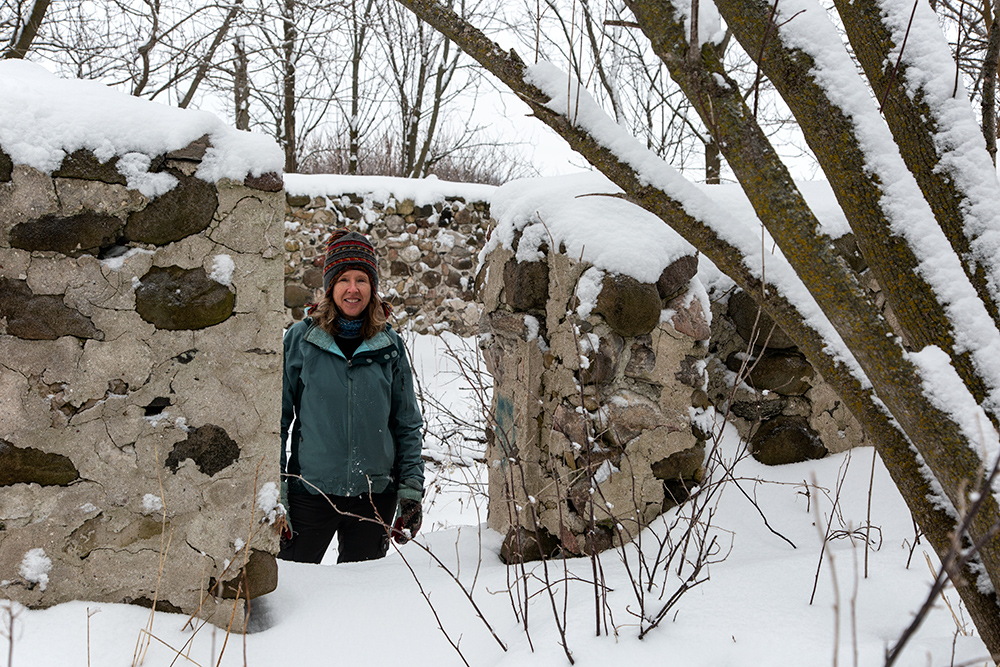 Cynthia Lorenz in stone foundation at the preserve. Photo by Eddee Daniel

Huiras Lake State Natural Area reminds me of the place I grew up, on a farm north of Eau Claire. At Huiras, the lake is a dominant feature in my work. However, images of a stone foundation that is on the property, as well as trees, show up in some of the final pieces. 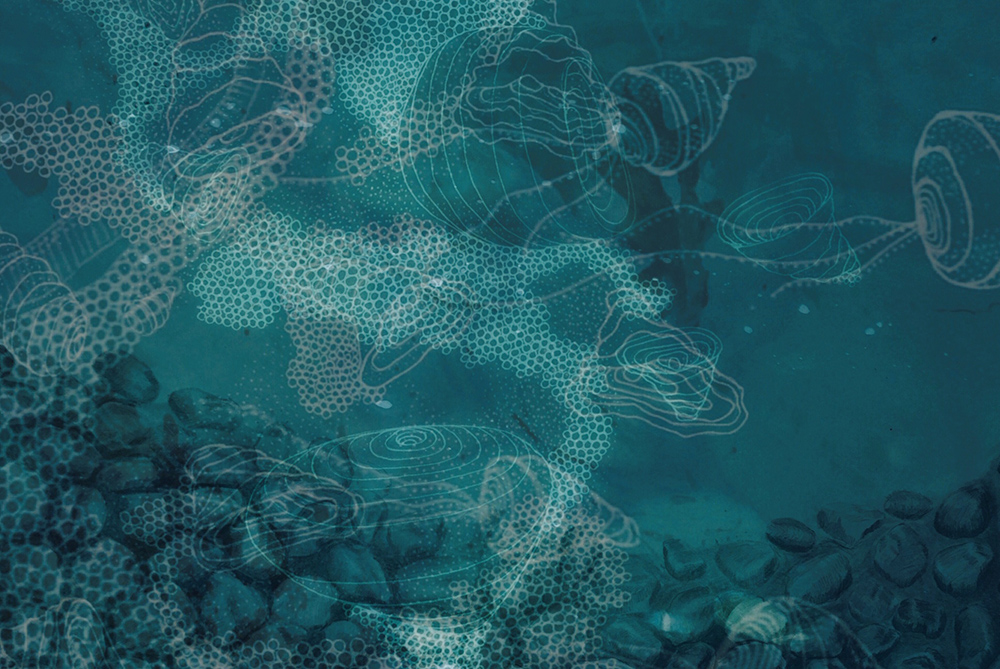 “What Lies Beneath III”

The first work that I’ve completed so far is titled What Lies Beneath III. In it you can see an interpretation of the stone foundation and organisms that I’ve imagined, which would be unseen by the unaided eye. 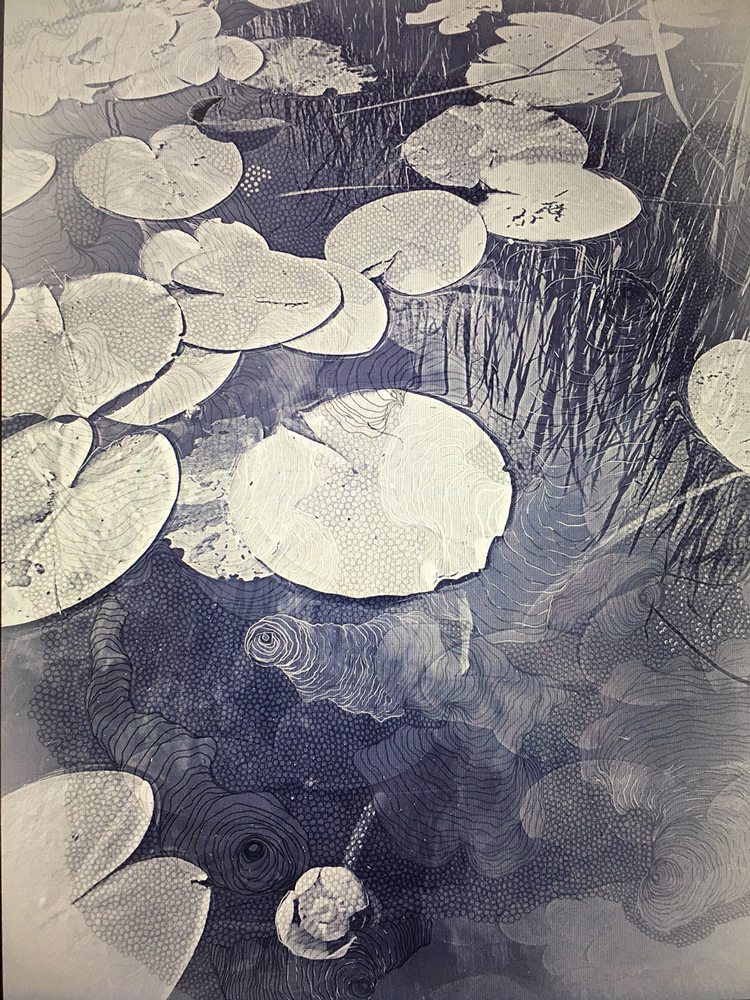 “What Lies Beneath IV”

The second one is titled What Lies Beneath IV. Here the focus is on the lily pads of Huiras Lake, with larger creatures emerging from the depth. I think of these organisms as the glue that binds all the components of the natural world together. By binding I mean that they are what keeps the earth and life surviving and healing itself, even when we can’t see anything happening with our human eyes. 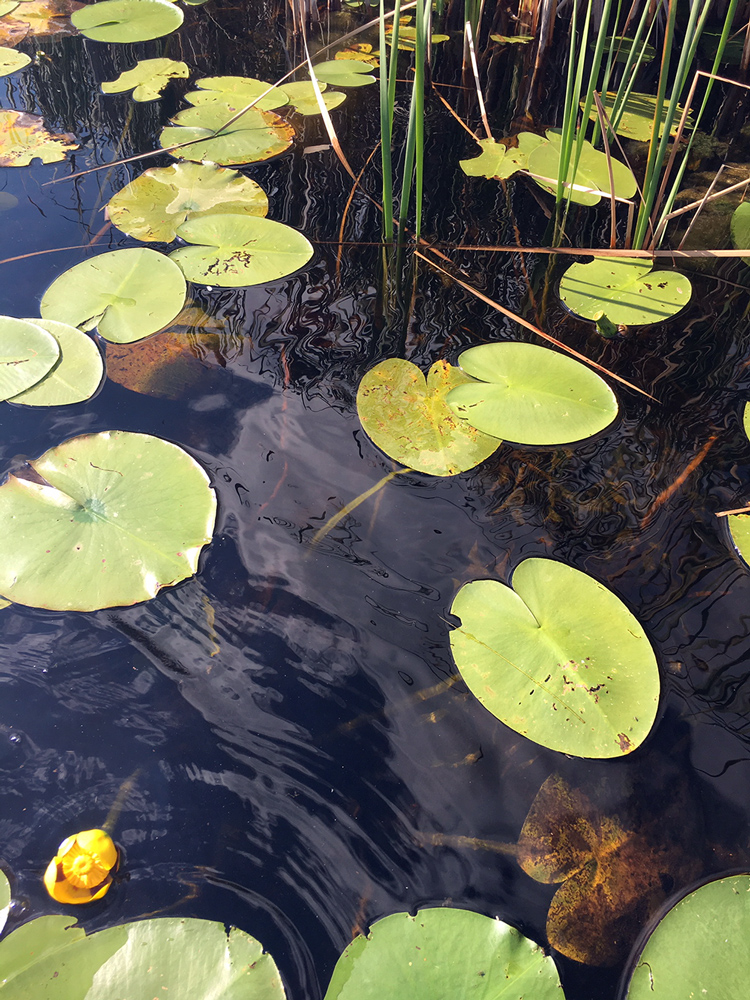 Photo of lake surface, study for “What Lies Beneath IV” 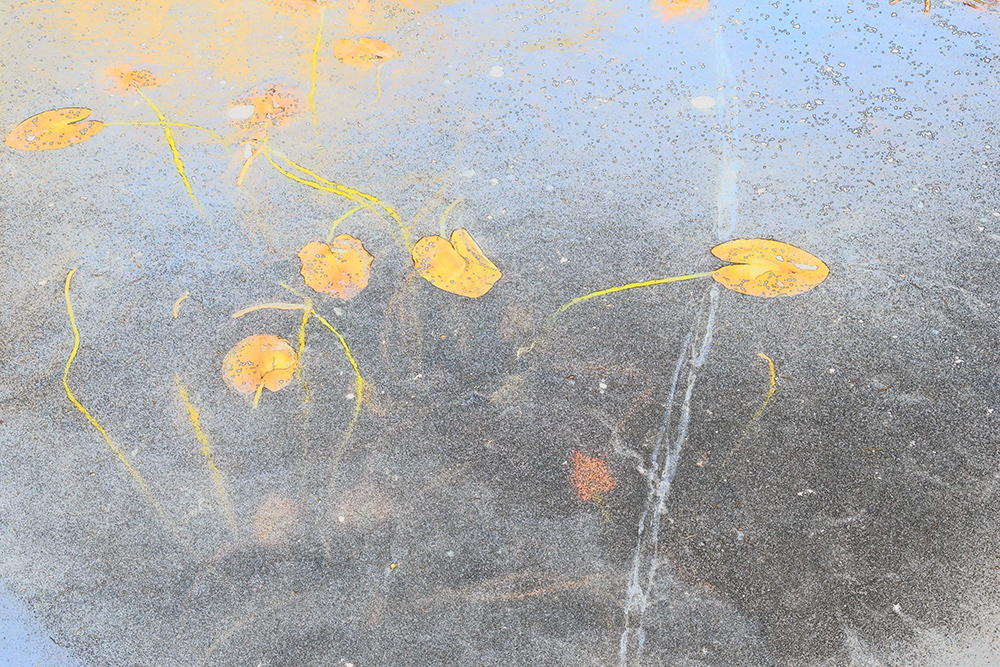 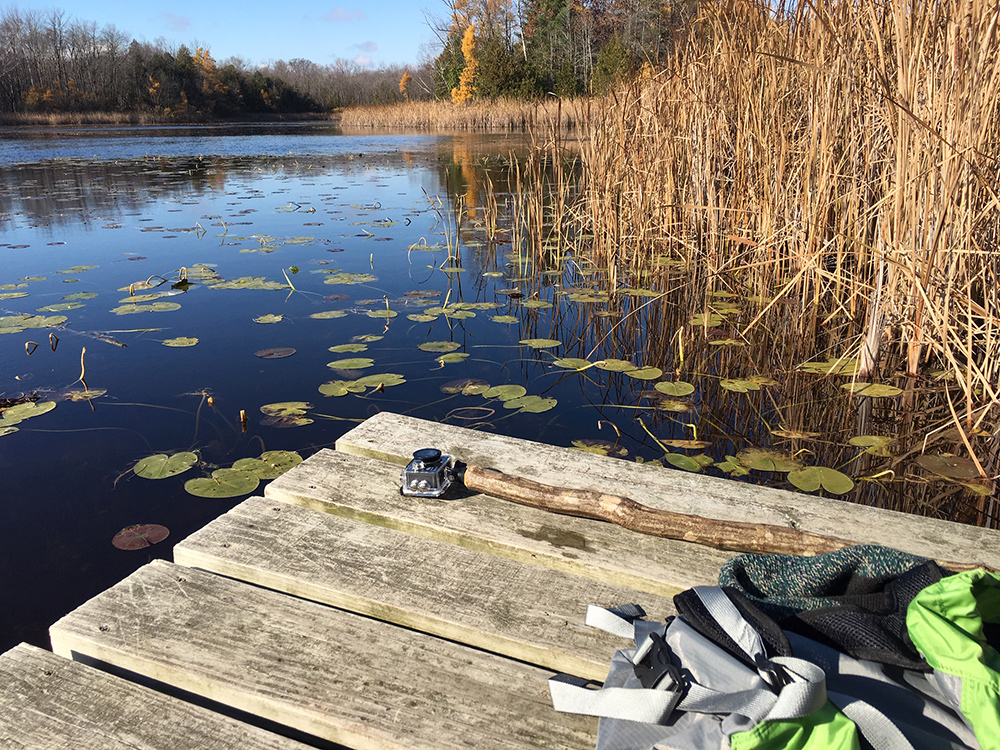 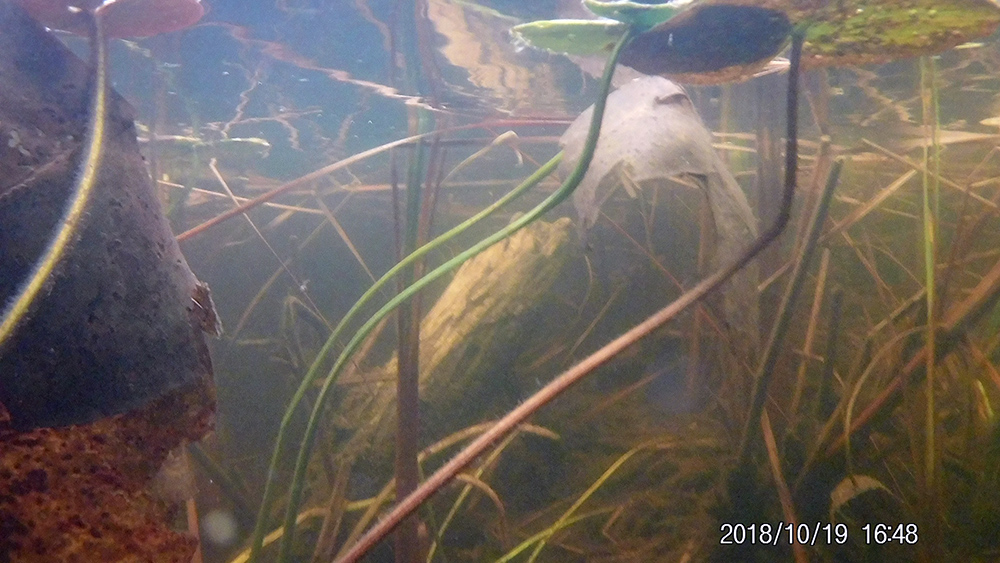 Cynthia Lorenz is an art educator and staff member at Gallery 224. Website:  artclorenz.myportfolio.com/

All photos by Cynthia Lorenz, except as noted. Featured photo of Cynthia Lorenz on frozen lake by Eddee Daniel, board member of Preserve Our Parks.