They weren’t all this feisty. But my little sturgeon wouldn’t hold still for our selfie together. Wriggling furiously, it leaped into the water before I could lower my hand to release it. As I watched, it disappeared into the depths of Lake Michigan. 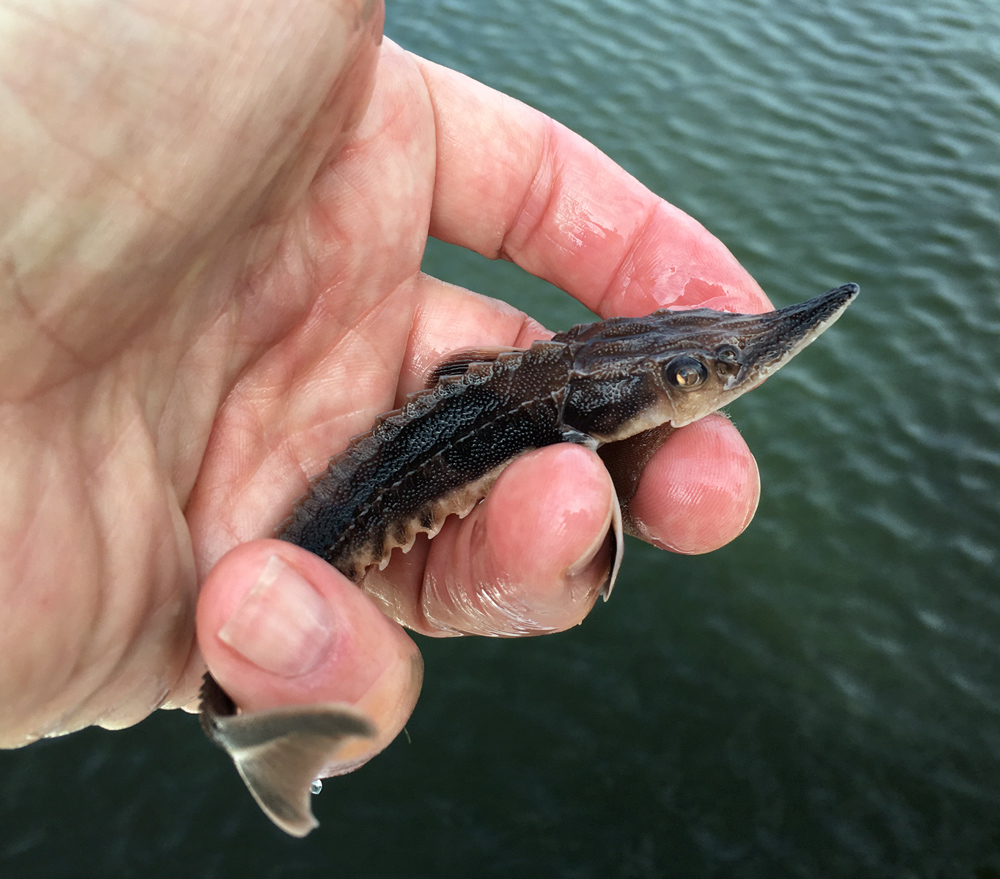 Did you know that some sturgeons grow up to ten feet long and weigh over 200 pounds? Mine was about five inches and hardly weighed anything. If it survives, though, it could live for a hundred years and become a behemoth too. 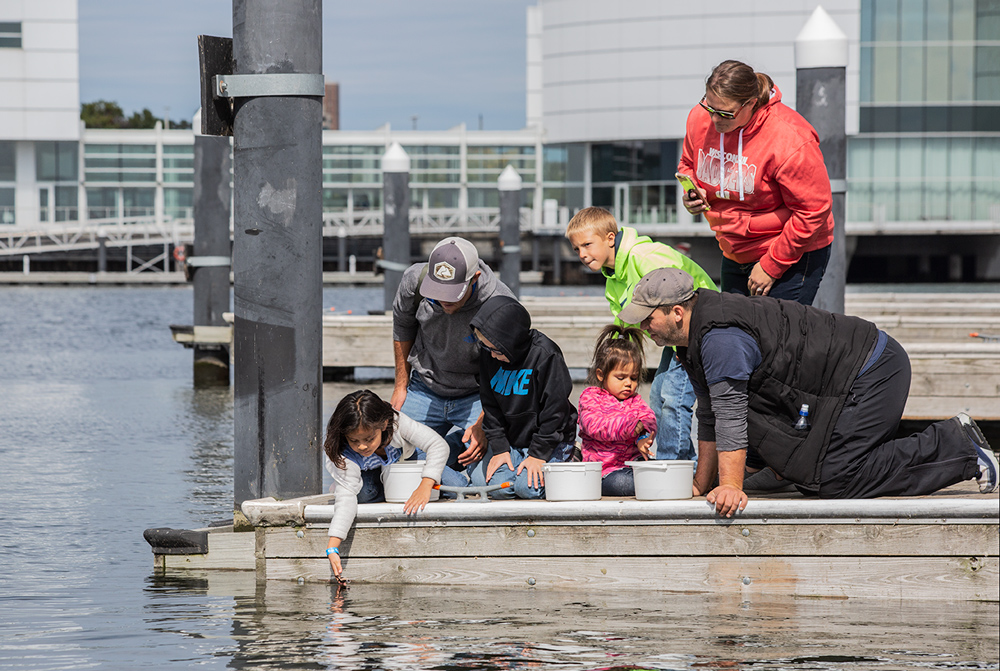 After my miniature sturgeon swam away I watched as all around me other people had close encounters with their own tiny fish. Some were as feisty as mine, but others held still for the inevitable cell phone selfies and swam placidly away from the fingers of their human sponsors. The excitement and delight on people’s faces was contagious. I was witnessing an unlikely love affair with a primitive species that swam with dinosaurs 150 million years ago. 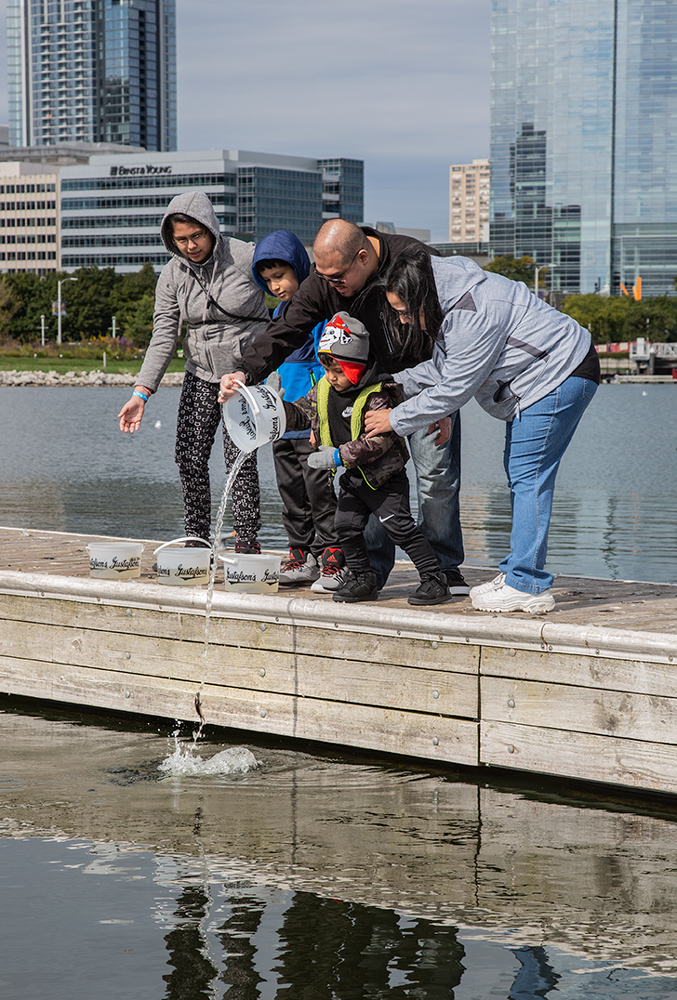 Did you know that the first sturgeons appear in the fossil record of the Triassic Period, which began 248 million years ago? Their elongated, cartilaginous and scale-less bodies, armored with distinctive rows of bony plates, have changed little since then. Ours were lake sturgeons, one of about 25 species in the group collectively known as sturgeons. 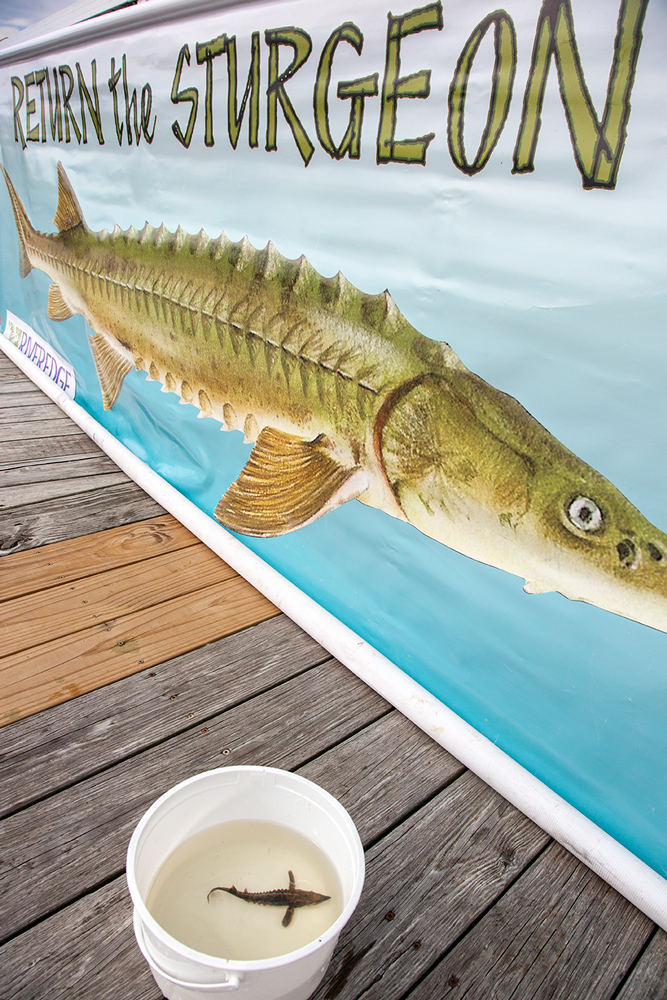 For the past dozen years Riveredge Nature Center, which is located on the Milwaukee River in Ozaukee County, has organized Sturgeon Fest. It has two primary purposes. First, to raise public awareness of and support for the plight of the species. Second, to introduce young fish that have been reared in special tanks over the summer into the natural environment. 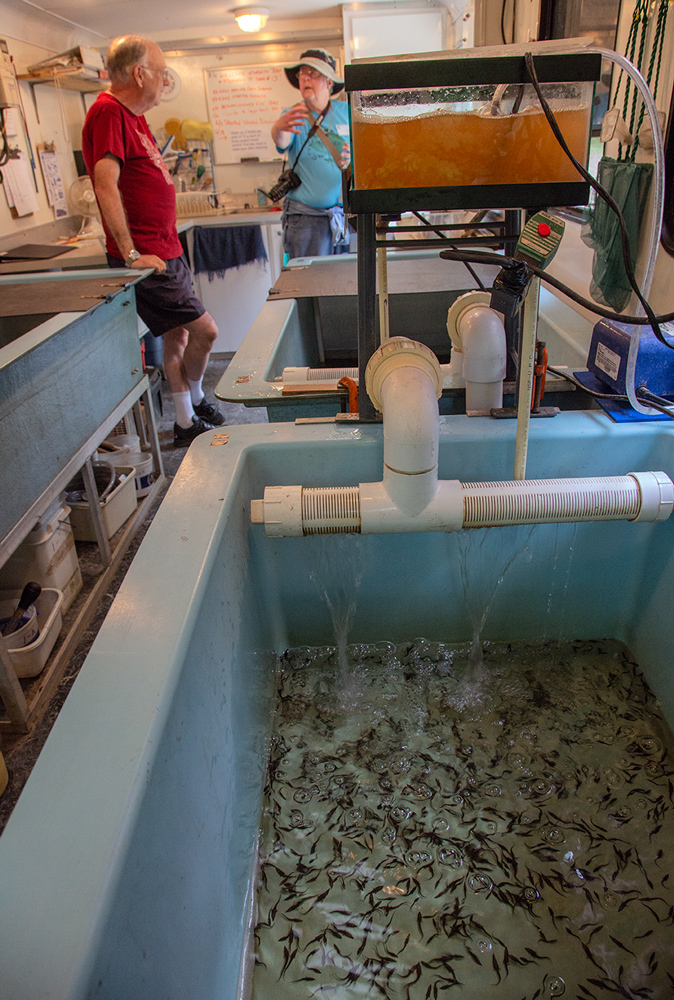 Did you know that, when it’s time to spawn, sturgeons (like salmon) return instinctively to the same river where they were born? With assistance from the Wisconsin DNR, Riveredge Nature Center has created a streamside fish hatchery connected to the Milwaukee River. Raising the sturgeon in river water maximizes the likelihood that the young fish will imprint and return. 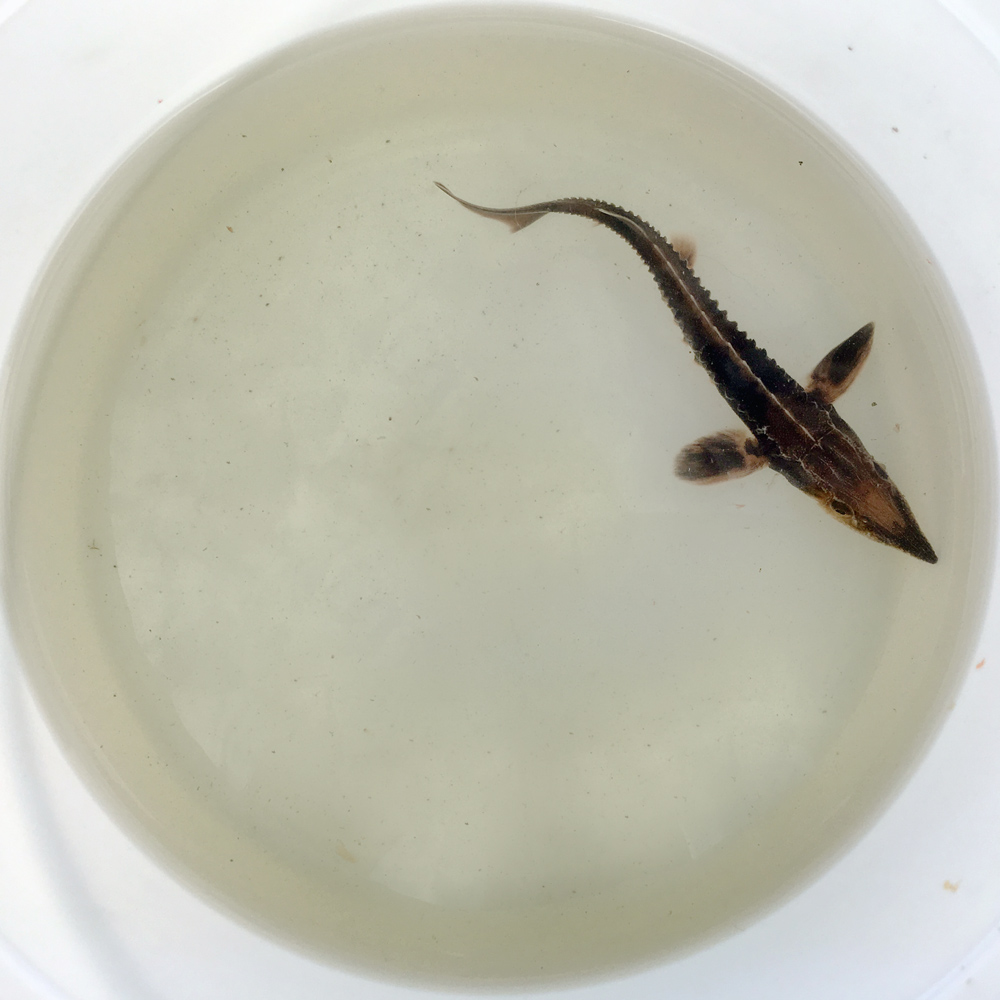 Hundreds of people stood in line as they waited their turn, cheerfully and patiently, to pick up a pail with their personal baby sturgeon—or two, or more—before taking them out onto the public docks and setting them free. Riveredge staff told me that 983 fish had been provided and the beautiful fall day had brought out approximately 2,500 individuals to help release them. 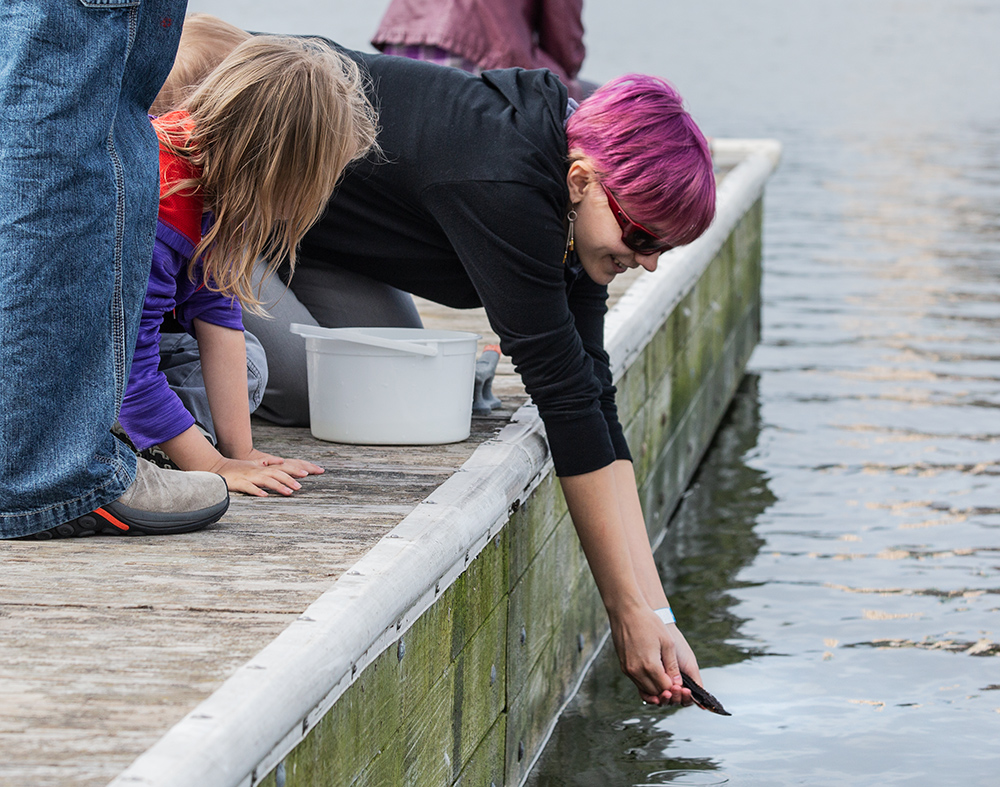 If nearly a thousand fish sound like a lot, consider this: One female sturgeon can lay as many as 700,000 eggs—think caviar. But even under ideal circumstances only a tiny fraction of them survive. 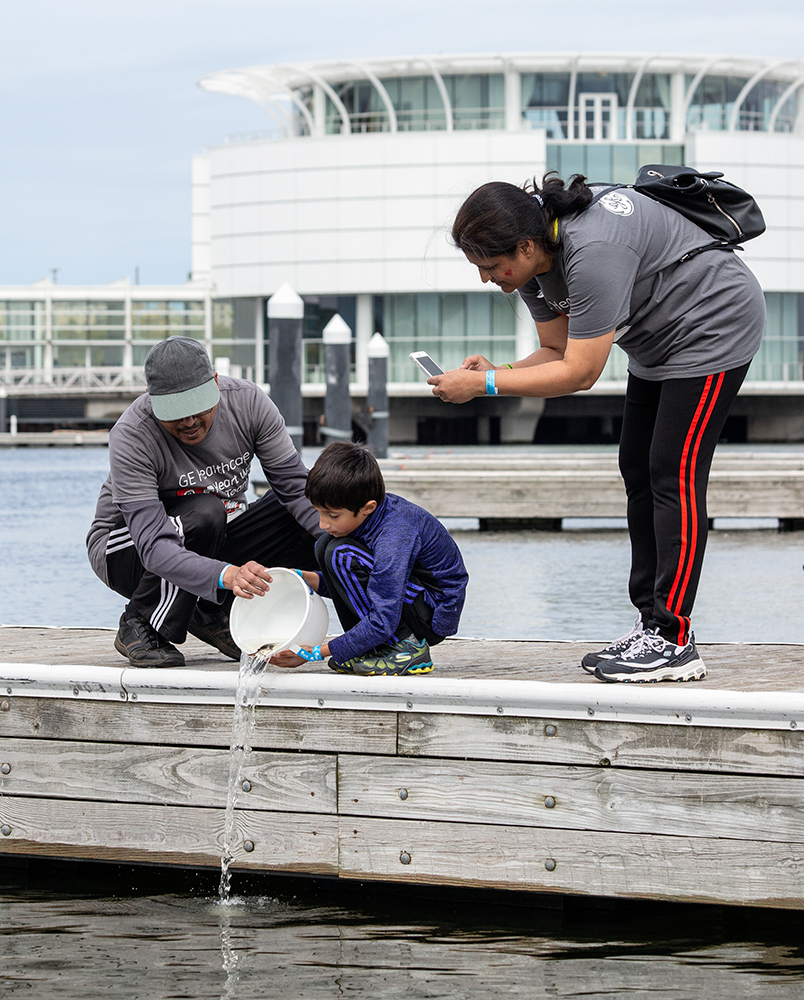 Did you know that the International Union for Conservation of Nature recently declared sturgeon to be “more critically endangered than any other group of species?” Due to a number of factors, including overfishing (think caviar), the sturgeon population in Lake Michigan, which once numbered in the millions, has dropped to only a few thousand. Until Riveredge Nature Center began reintroducing them no sturgeon had been seen in the Milwaukee River since 1890. 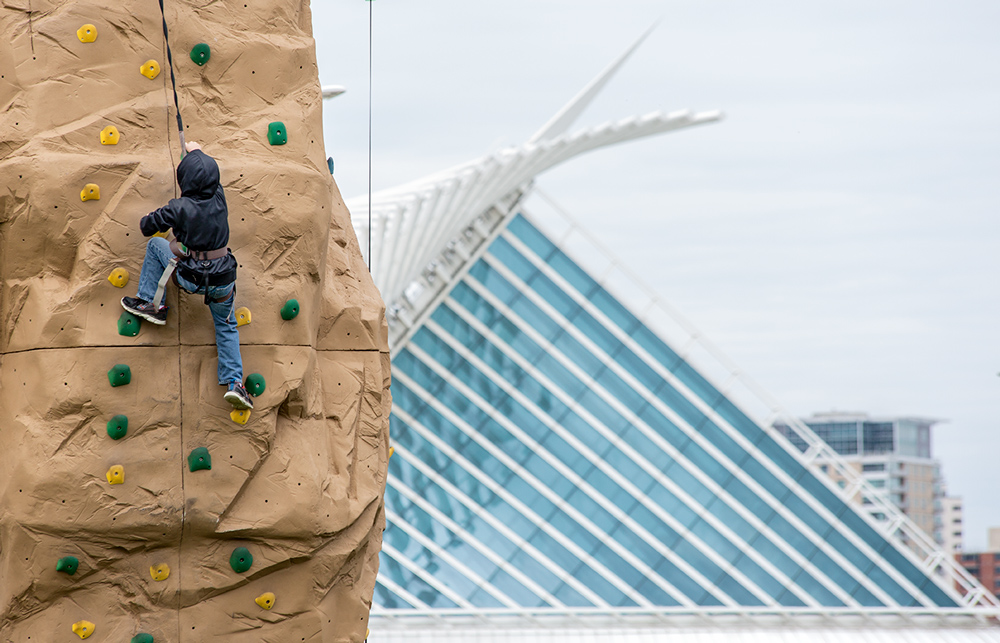 The main attraction of Sturgeon Fest clearly was the opportunity to release the fish. However, there were other family-friendly activities going on simultaneously, including an Adventure Rock climbing wall. 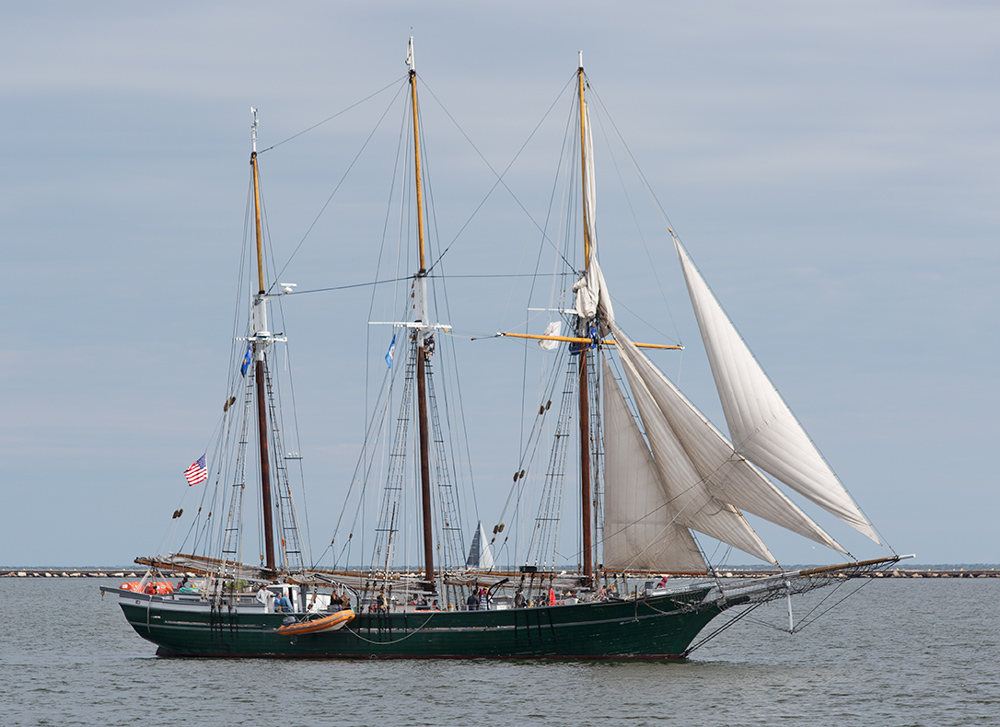 Adding to the ambience, the Denis Sullivan, Milwaukee’s replica of a three-masted lake schooner, sailed past the park and docked next to Discovery World. 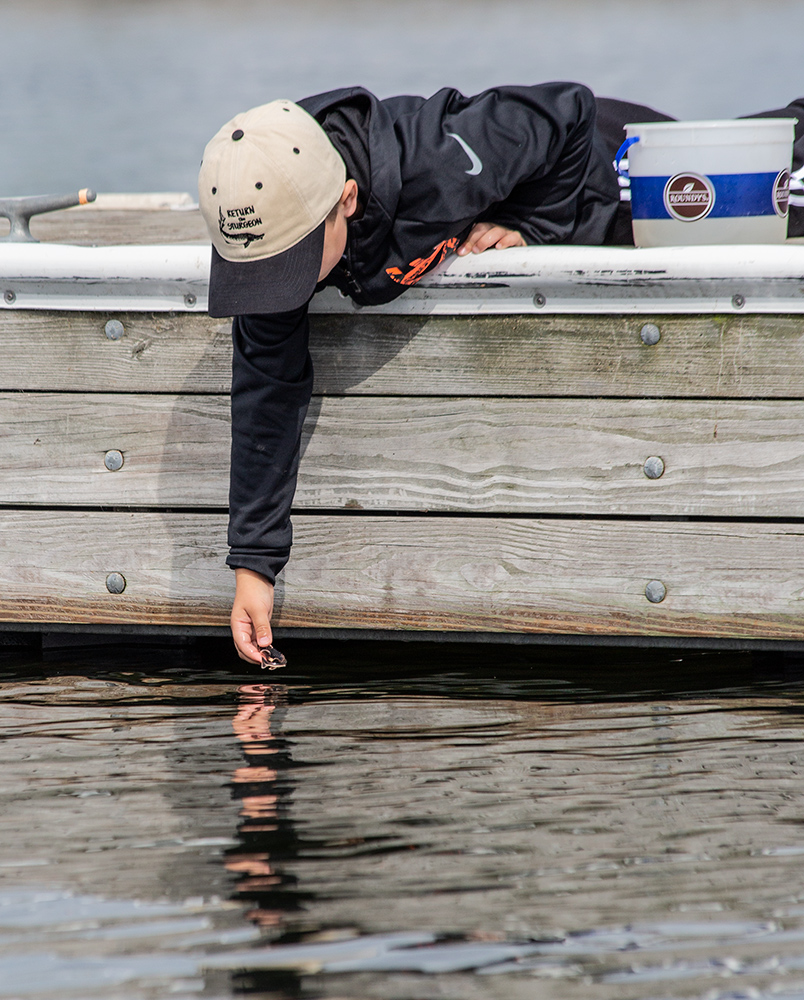 Did you know that sturgeon are known as benthic feeders? That’s the scientific term for bottom-feeders. They eat snails, leeches, crayfish and other crustaceans. Because they have no teeth their feeding method is to suck up bottom-dwelling creatures and “spit” out anything inedible through their gills. 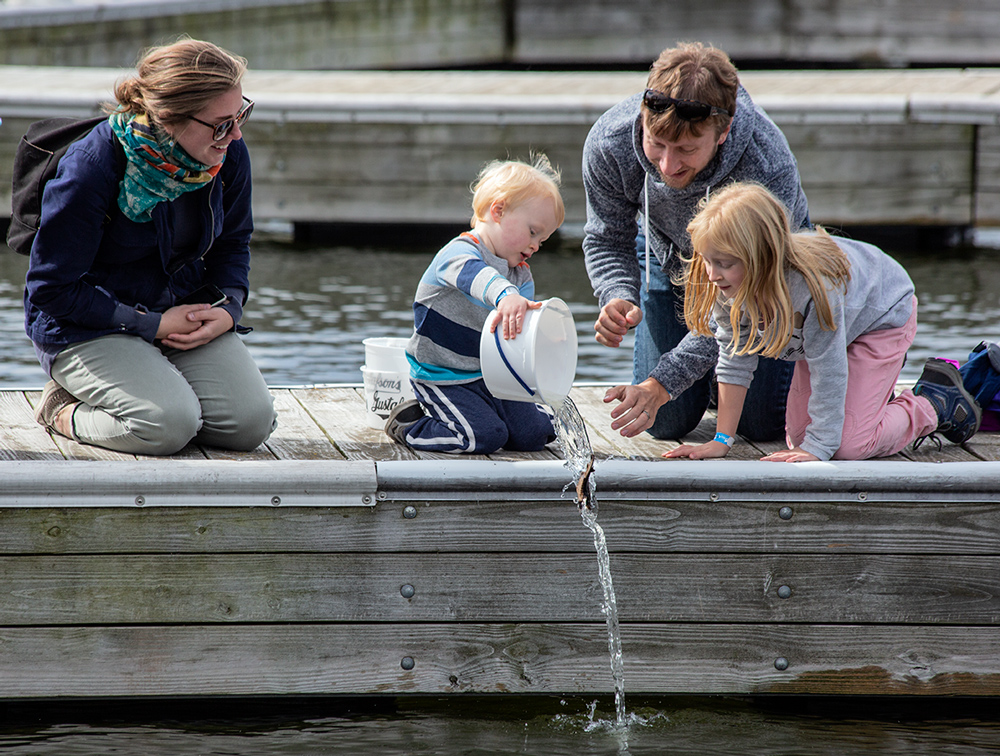 You can learn more about sturgeon and the effort to reintroduce them in the Milwaukee River on the Riveredge Nature Center website. 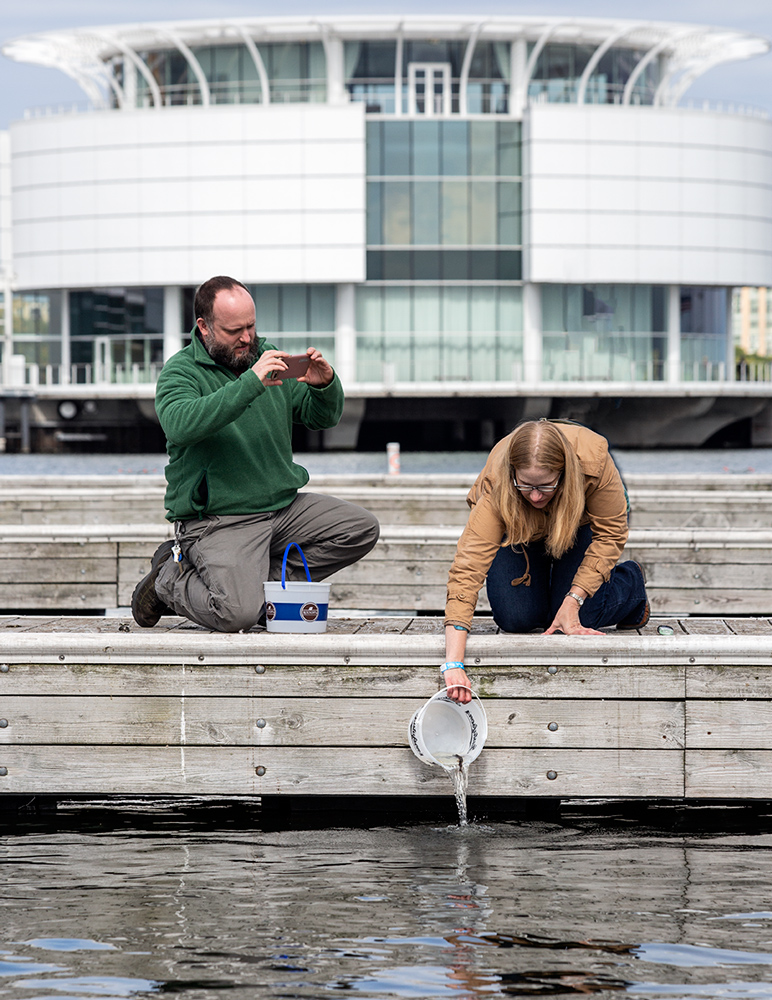 If you didn’t make it to Sturgeon Fest this year be sure to add it to your calendar for Fall 2019. And share the love! 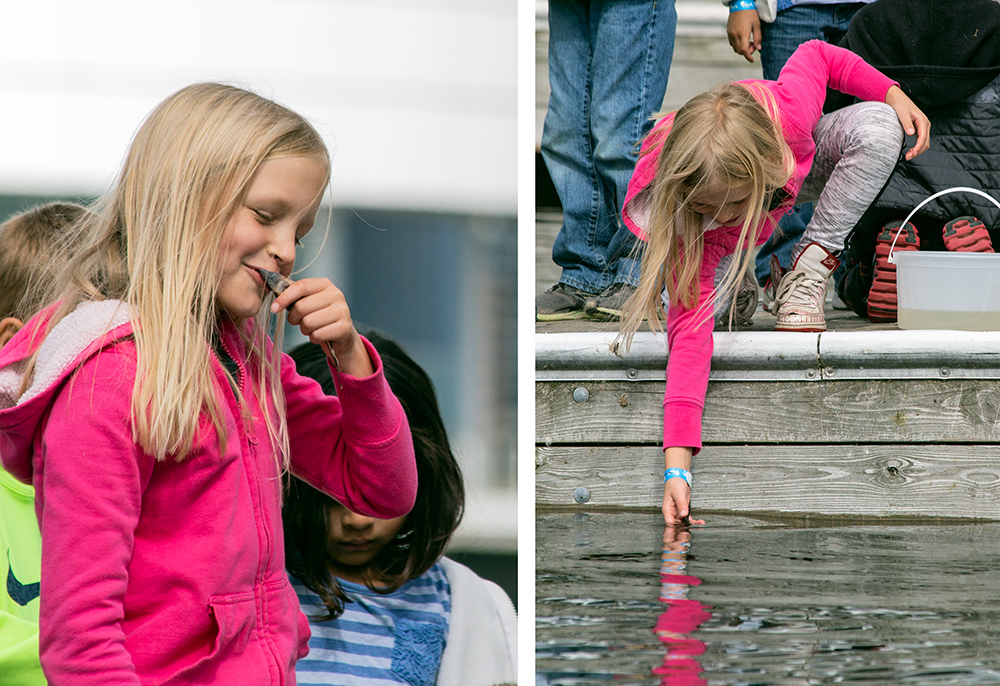 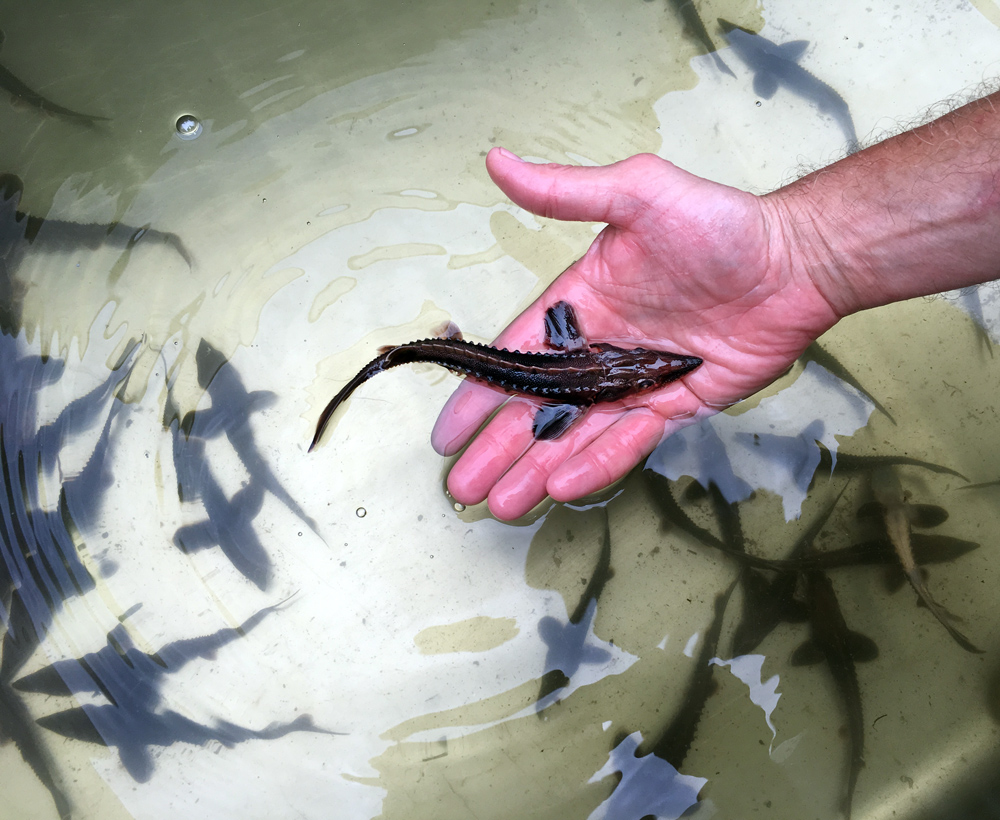 A volunteer with baby sturgeons in holding tank

A regal display of wildflowers, purple asters and goldenrod, at Lakeshore State Park.

For information about Lakeshore State Park, go to our Explore the Park page.