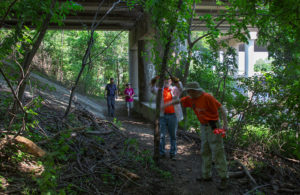 The new trail passing under I-43.

Now, for the first time, it is possible to walk the banks of the Milwaukee River all the way from Caesar’s Park, south of North Avenue, to Silver Spring Drive without crossing any streets. The final link in this chain is a new connector trail between Estabrook and Lincoln Parks. The connector, which begins at the northwest corner of Estabrook Park, allows hikers to walk under Port Washington Road and Interstate-43. Previously, the only way to make this connection had been to walk along busy Hampton Avenue and cross at Port Washington. 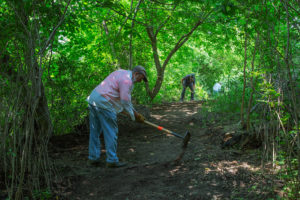 Cutting the west leg of the new trail.

At Hampton Avenue, travelers wishing to avoid traffic can walk across the bridge and use a paved path to access a tunnel running under the busy thoroughfare. On the other hand, if you don’t mind braving the traffic, you can cross the road and enjoy a beer at the Lincoln Park Golf Course clubhouse. They have a nice selection! 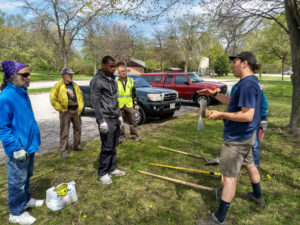 The new connector trail was blazed where none previously existed in a mere seven weeks, thanks to the many volunteers who came together each Tuesday afternoon this spring. Experienced trail builders instructed participants in trail-building techniques using tools such as a Pulaski, a McLeod or a Rogue Hoe. The trail was a joint project of Friends of Lincoln Park, Friends of Estabrook Park and Milwaukee County Parks. 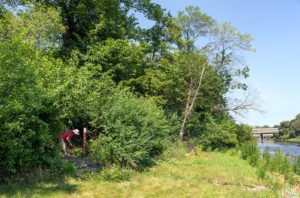 Clearing weeds around trail sign at east end of meadow.

This section of the Milwaukee River shoreline had been fenced off during a project to remove contaminated sediments from the river. When it was re-opened, some of the neighbors suggested building a trail through this little used section of shoreline that was cut off by the freeway and Hampton Avenue. The Milwaukee River Greenway Coalition met and discussed the suggestion. This resulted in the Friends of Lincoln Park sending a letter of intent to the Milwaukee County Parks Director who approved further investigation. 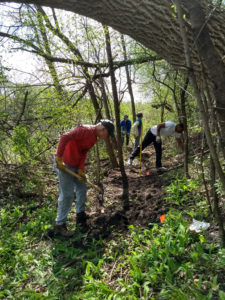 The route was approved by various Milwaukee County Parks administrators. The rights of access under the bridges was obtained from the Wisconsin Department of Transportation. A huge amount of work was done by Gage Brogan, the County Parks Trail Coordinator, just before he left Milwaukee for a new job in Bozeman, Montana. The work could not have been completed without Gage’s efforts or the work of the Estabrook Park Friends trails crew under the leadership of Harold Schmidt. The Cream City Conservation Corps and Friends of Lincoln Park were also active in the project. 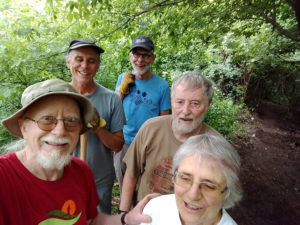 Selfie of volunteer crew on June 26. Photo by David Thomas.

David Thomas is the Secretary of the Friends of Lincoln Park.

Additional photos by Eddee Daniel, Preserve Our Parks board member and project director for A Wealth of Nature. 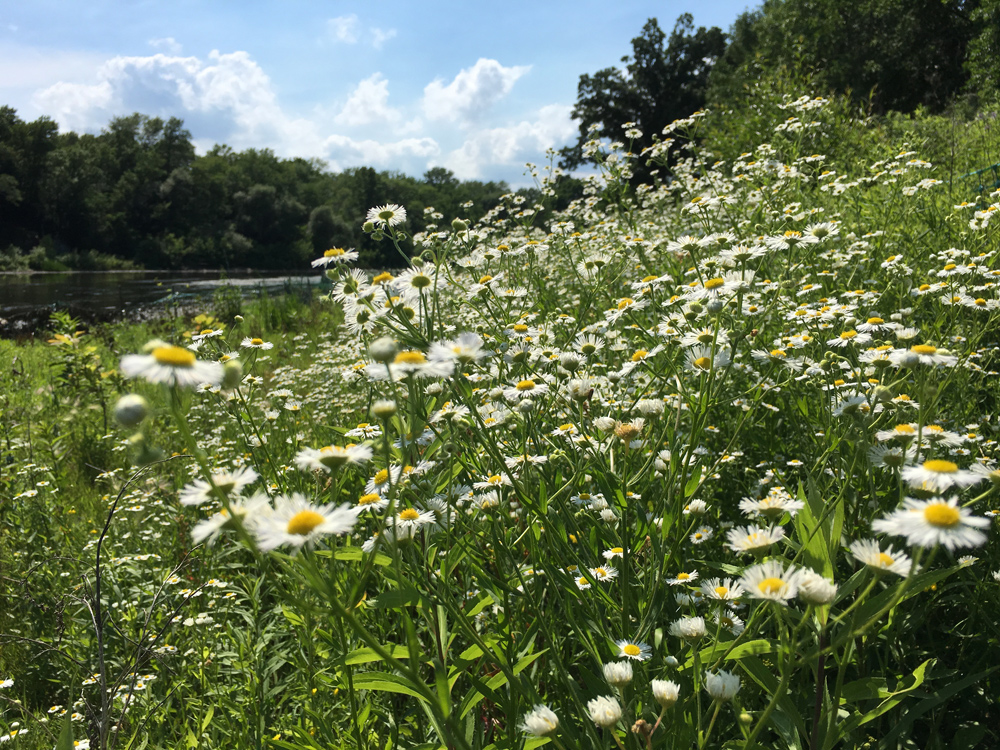 A profusion of wildflowers along the Milwaukee River adjacent to the new trail.