Maybe you know that John Muir—the father of conservation—grew up on a lakeside farm in rural Marquette County in central Wisconsin. Or that our own Baraboo River is one of the longest free-flowing rivers in the country. Or that Devil’s Lake is Wisconsin’s largest state park. But do you know what links all of these places together? The Ice Age Trail.

The Ice Age National Scenic Trail, which meanders almost 1200 miles through the state, is well known. It is Wisconsin’s premier hiking trail. But do you know about the Ice Age Trail Alliance (IATA), which holds an annual conference to celebrate the trail and all of the people who use and maintain it? I recently attended this year’s conference, held at the Ho-Chunk Hotel & Convention Center near Baraboo, WI. 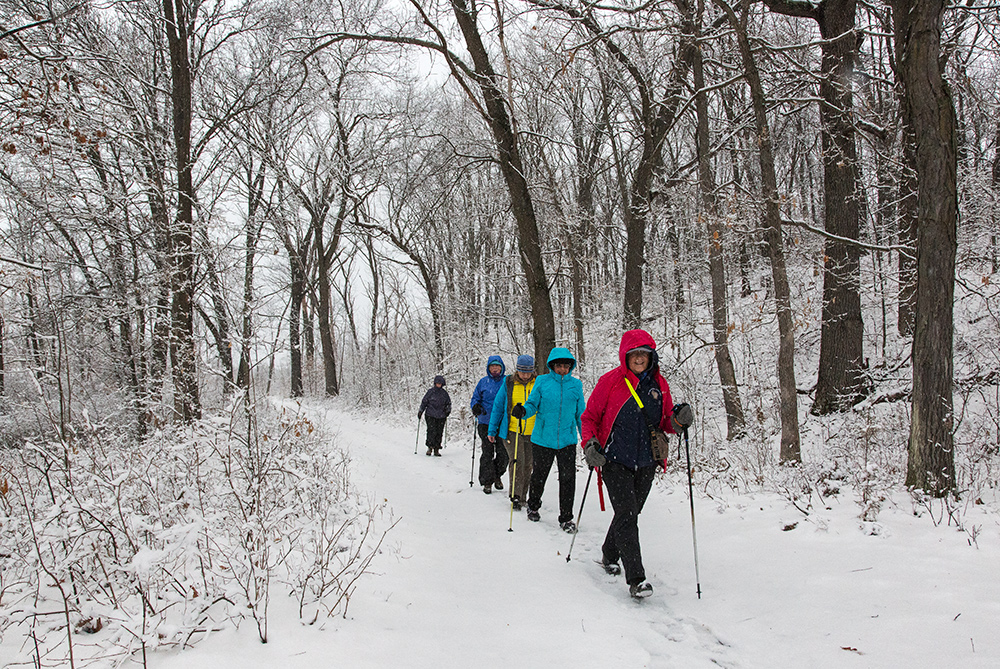 Have you been to conferences that held you captive for days in dark, cavernous convention halls? I have. But not this time! Each day of the IATA Conference begins with a field trip consisting of a tour and/or hike, usually along a segment of the Ice Age Trail itself. You can’t keep hikers indoors for long or they will skip out and go for a hike!

Followers of The Natural Realm will not be surprised that I not only enjoyed these hikes, but that I also took some photos along the way. 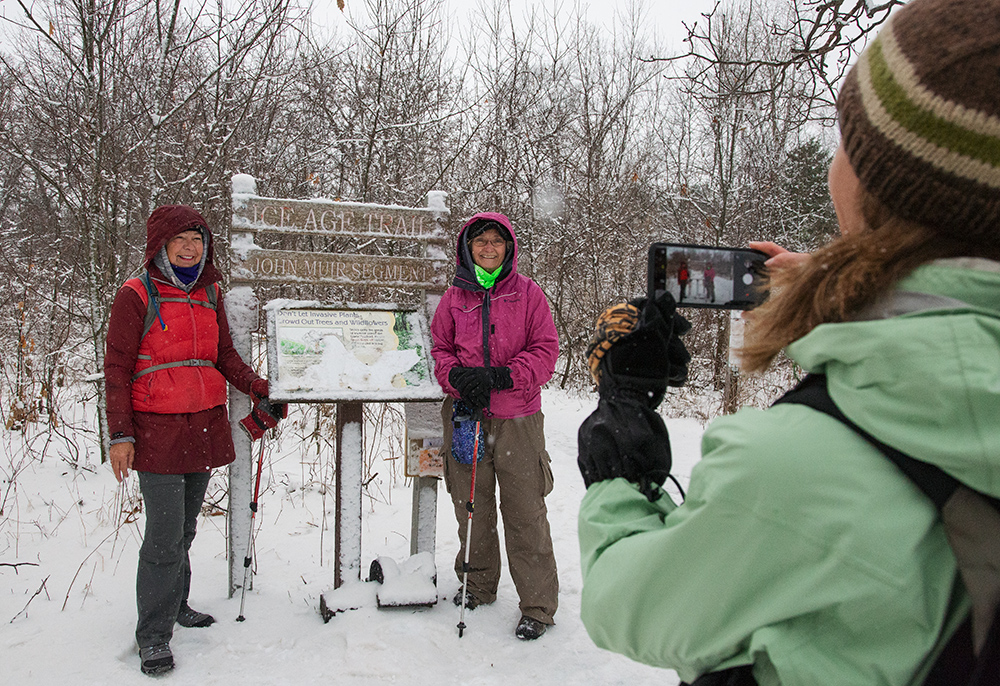 On Day 1 I chose the “Cradle of Conservation Tour and Hike.” With other hiking enthusiasts, I visited and walked the home grounds of not one but two conservation giants, Aldo Leopold and John Muir. Although they lived in different eras and never met, they just happened to live substantial portions of their lives within a few miles of one another.

First up: John Muir Memorial County Park, site of the Fountain Lake farm where Muir lived from the age of 10 until 22, when he left to attend the University of Wisconsin—Madison. 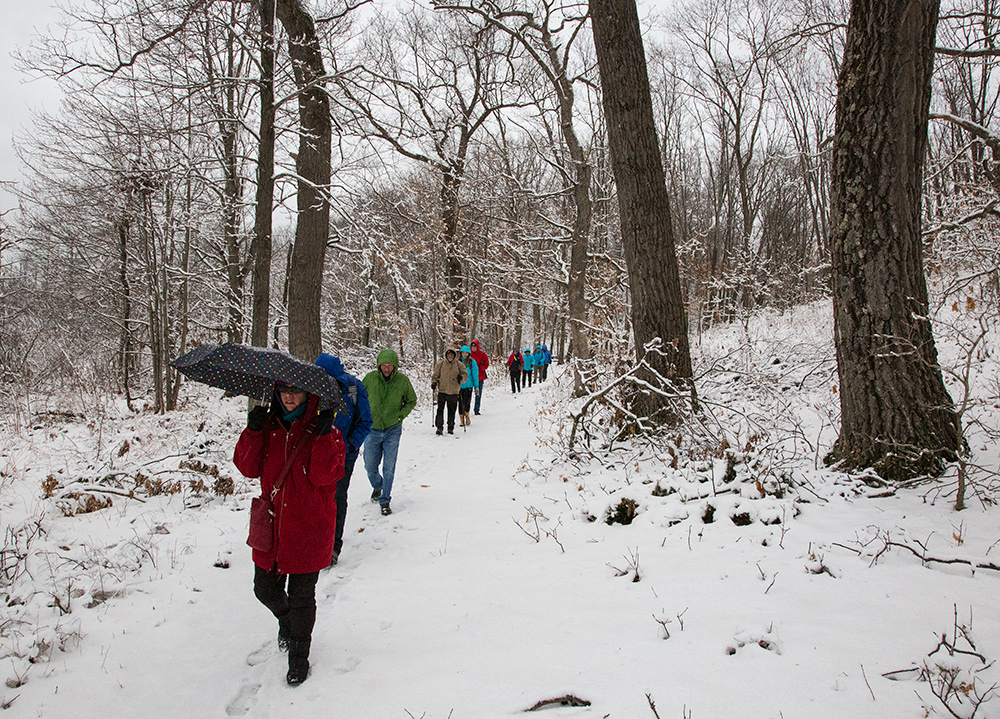 Hiking in the rain at John Muir Memorial County Park

The weather was pitiful. An unseasonable April snowstorm had dumped on our state the day before. Then, instead of more snow—which can be lovely—the day warmed up just enough to rain great globs of slush on us. We all trooped out of the bus anyway and hiked the two-mile segment of the Ice Age Trail that circumnavigates Muir’s boyhood lake. Ice Age Trail hikers are undaunted by inclement weather! 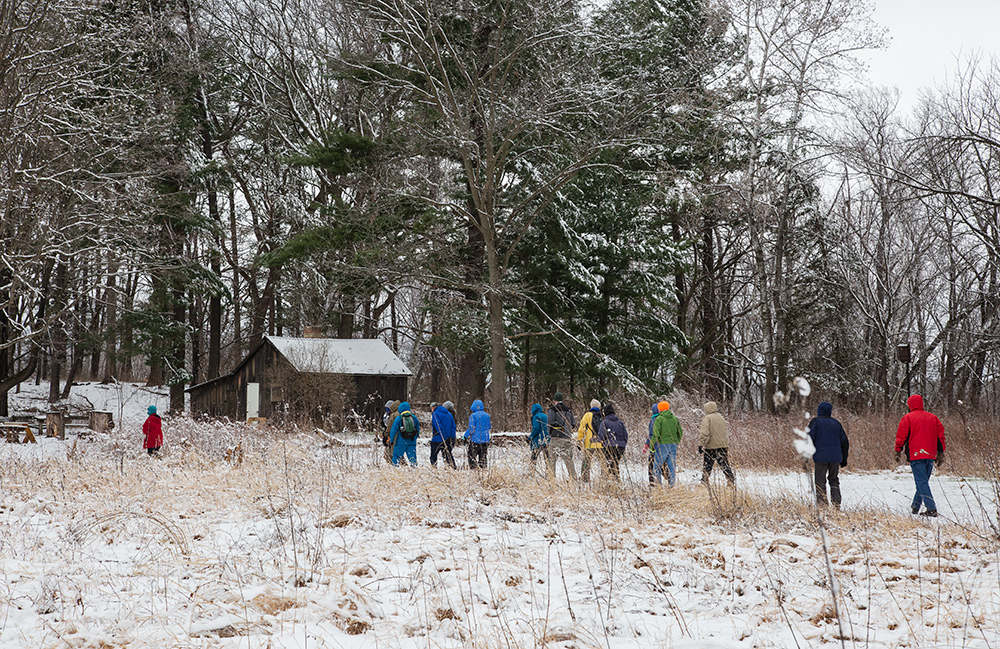 Pilgrimage to the Leopold shack

Next up: The Aldo Leopold Foundation and a visit to his legendary shack. We were given a tour of the Leopold Center (foundation headquarters and visitor center) and learned—among many other fascinating details—that when it was completed in 2007, to the exacting specifications of LEED Platinum certification, it was the greenest building on the planet. 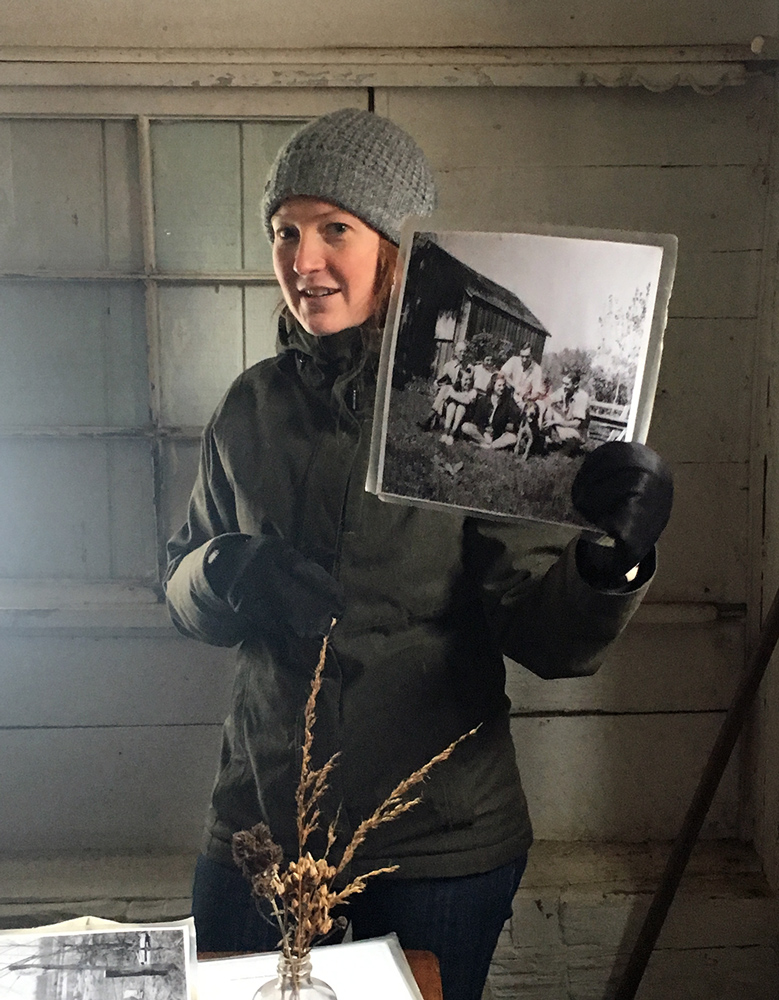 The highlight of the morning was entering Leopold’s famous shack. Inside, we were regaled with innumerable details about the many years he spent there, in the visibly cramped quarters—with his wife and five children! We marveled at the crude accommodations that had once been a chicken coop. 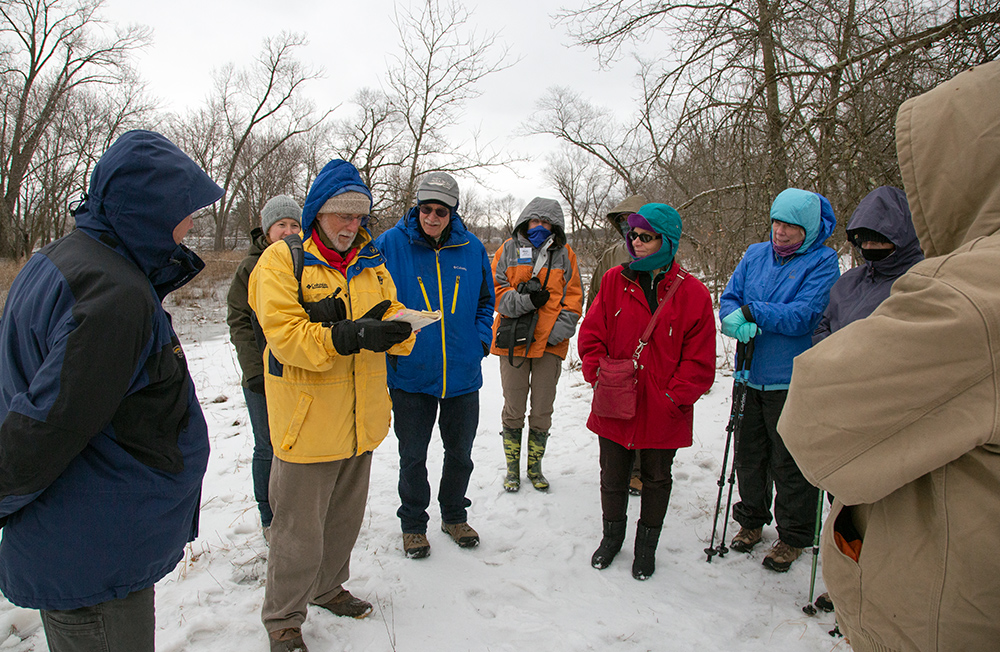 Reading from “A Sand County Almanac”

Outside, we stood along the verge of the flooded Wisconsin River in a bitter wind and took turns reading aloud the April chapter, “Come High Water,” from Leopold’s masterpiece, A Sand County Almanac. An excerpt:

“There are degrees and kinds of solitude…. I know of no solitude so secure as one guarded by a spring flood; nor do the geese, who have seen more kinds and degrees of aloneness than I have.” 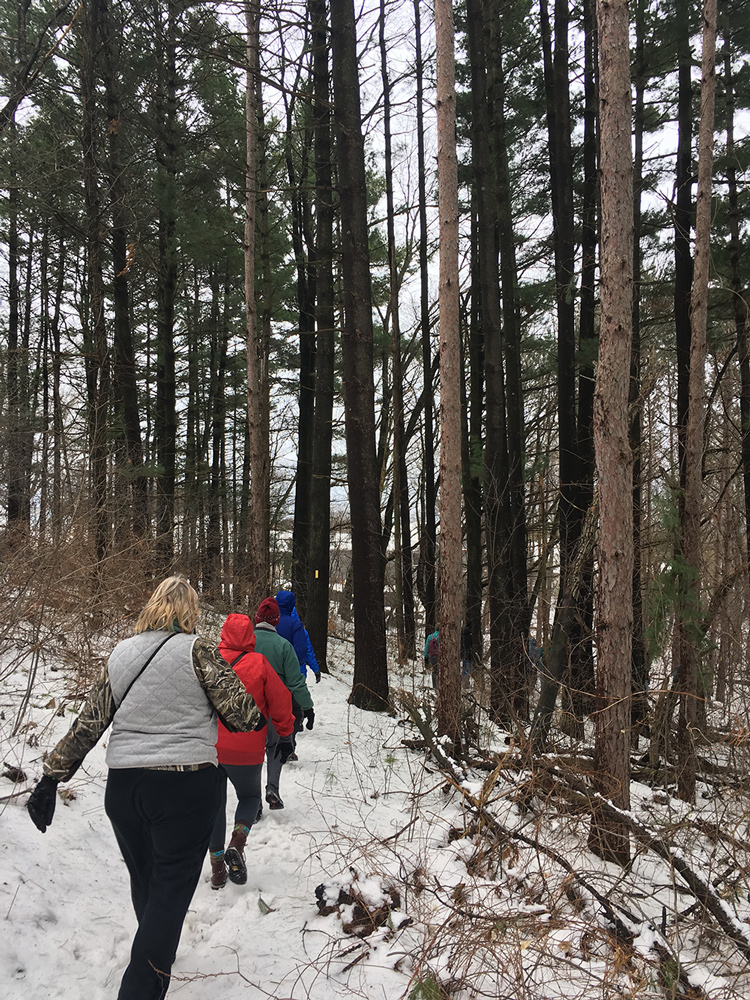 Ice Age Trail on the Boo U campus

The hike on Day 2 was a revelation. Because it was so unexpected. “Explore Historic Baraboo” was described in the conference catalogue as an “urban hike through the City of Baraboo.” We would “hike city streets as they take you past local attractions,” including the famous Circus World Museum. This sounded far less appealing to me than either “Cradle of Conservation” or the following day’s planned hike at Devil’s Lake. 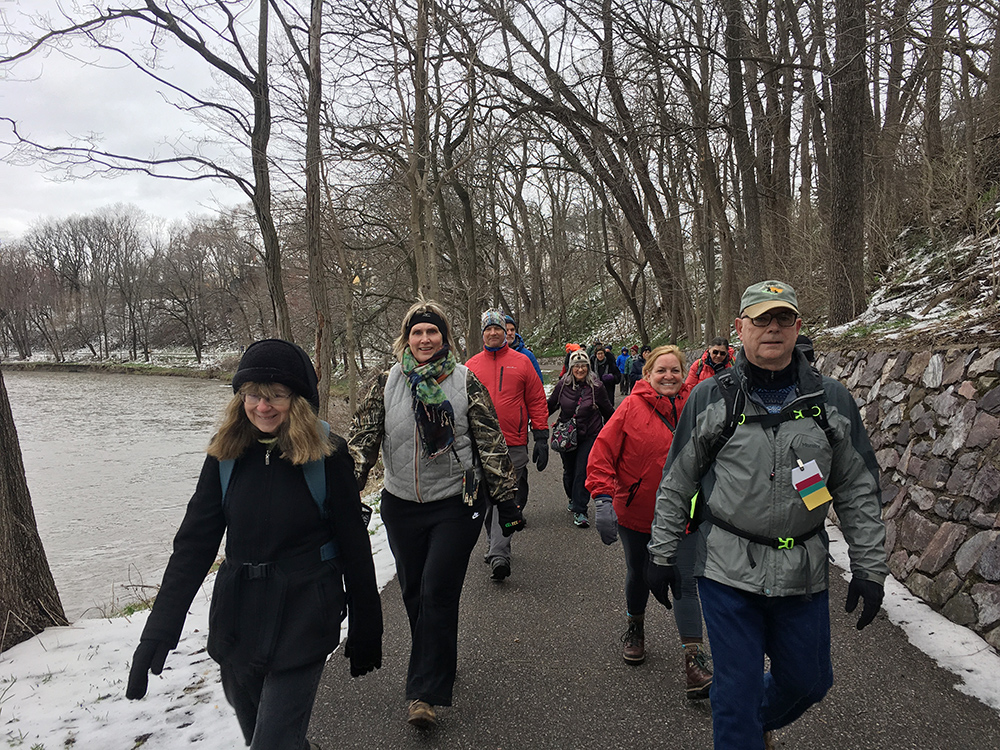 But what the description failed to reveal was that the Ice Age Trail actually runs right through the city, mostly paralleling the Baraboo River on a lovely riverside path. I found myself chastened. I am the indefatigable promoter of “urban wilderness” and here my faith was found wanting. 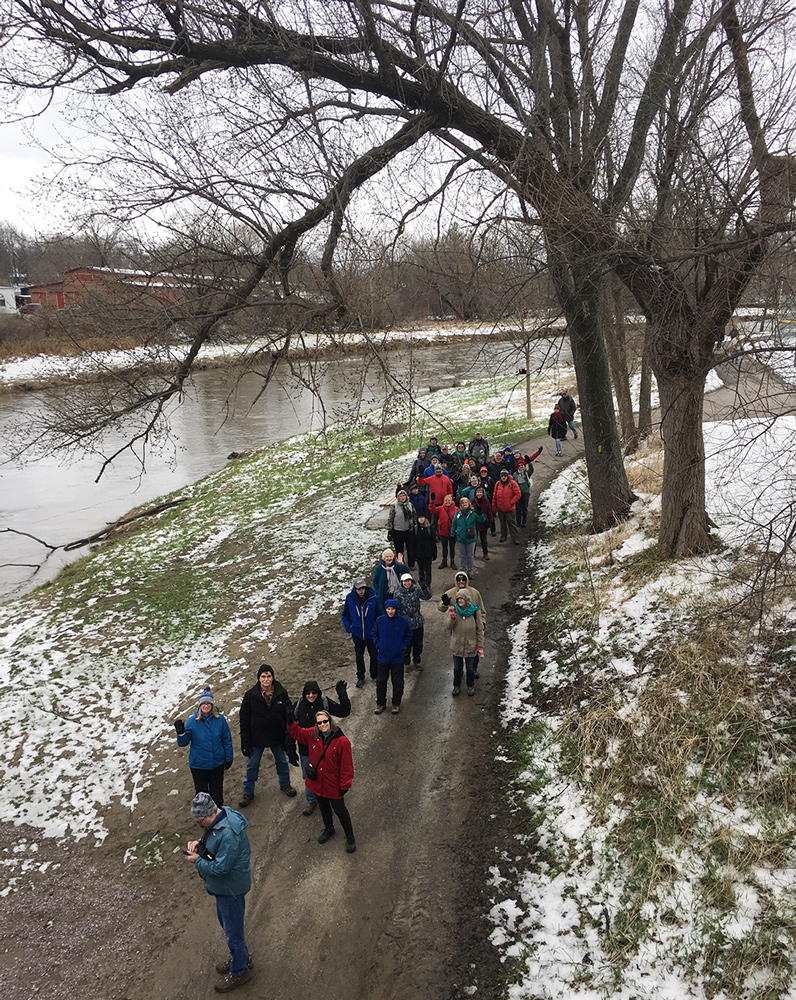 The hike began on the campus of the University of Wisconsin—Baraboo (Boo U to the locals, according to our guide), where the Ice Age Trail runs along the ridge of a moraine. From the campus we crossed a couple of streets to reach the swollen Baraboo River that led us for most of the four-mile hike, with just a brief detour past Circus World Museum. 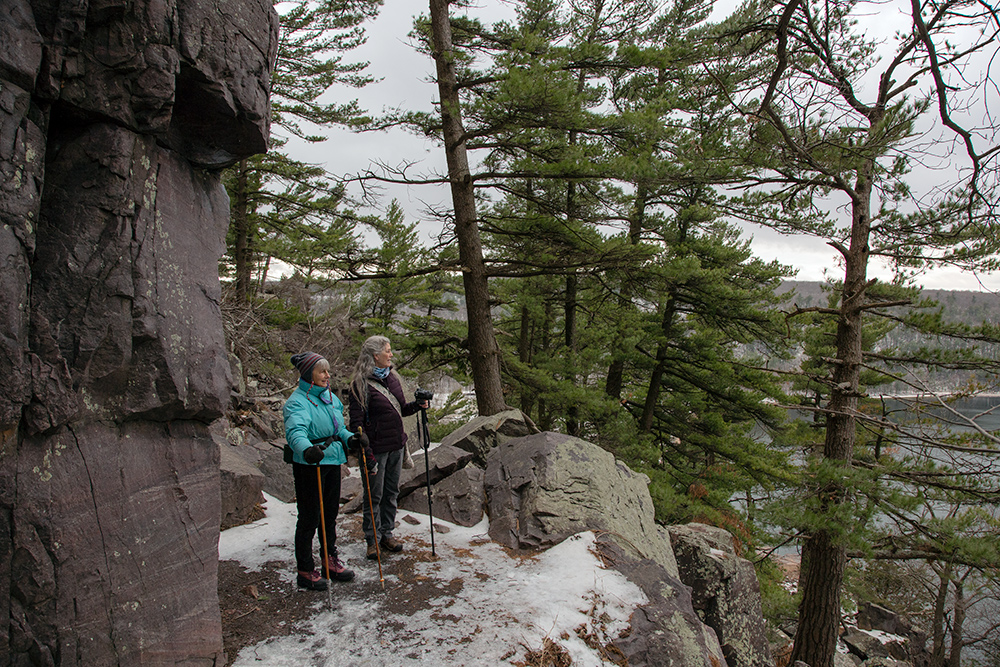 Day 3: Devil’s Lake State Park. The conference organizers knew to schedule this wonderful hike on the final day. Devil’s Lake is the jewel in the crown of Wisconsin’s park system and sees well over 2 million visitors per year, putting it on par with many popular national parks. The Ice Age Trail snakes around the lake itself. We jumped on it at the bottom of the East Bluff, where it climbs a precipitous rough-hewn staircase on the Balanced Rock Trail. 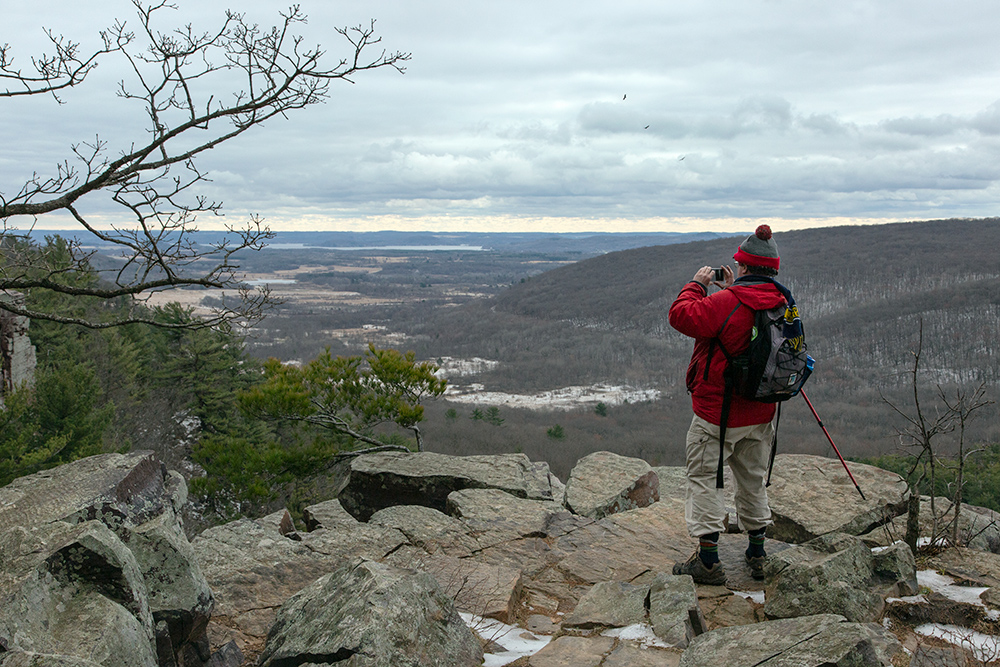 At the top we took the East Bluff Trail along the bluff edge, with spectacular views not only of Devil’s Lake just below but also of Lake Wisconsin far off in the distance to the east. The sky remained overcast, as it had all week, and the temperature felt wintry, but at least it wasn’t raining (or snowing) anymore! 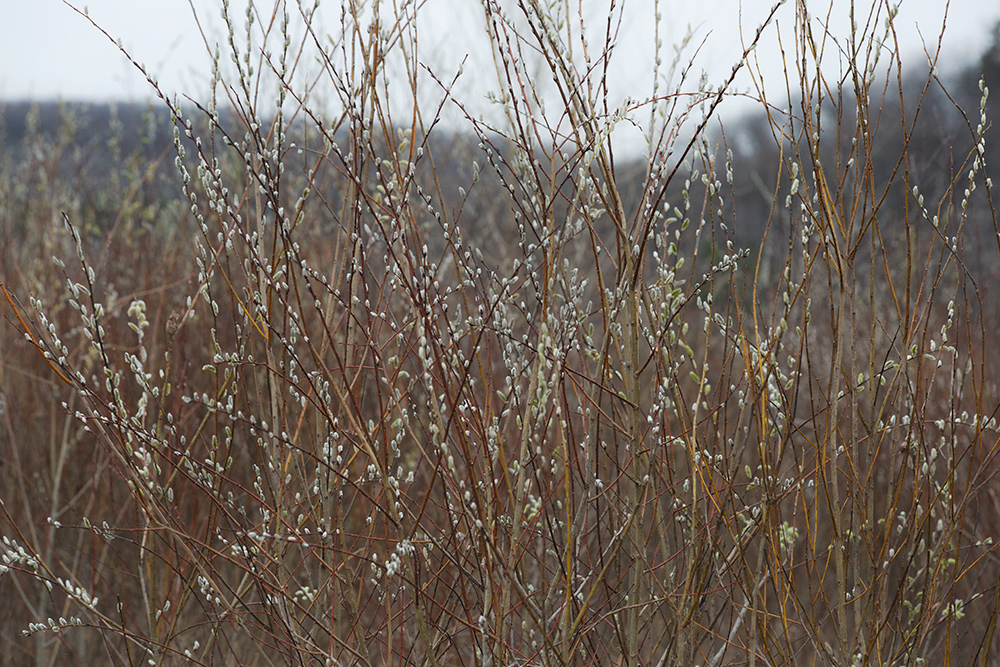 The last leg of our 4-mile trek ran through Roznos Meadow. There the snow was already melting away and I finally spied an undeniable sign of spring in a stand of budding pussy willows. 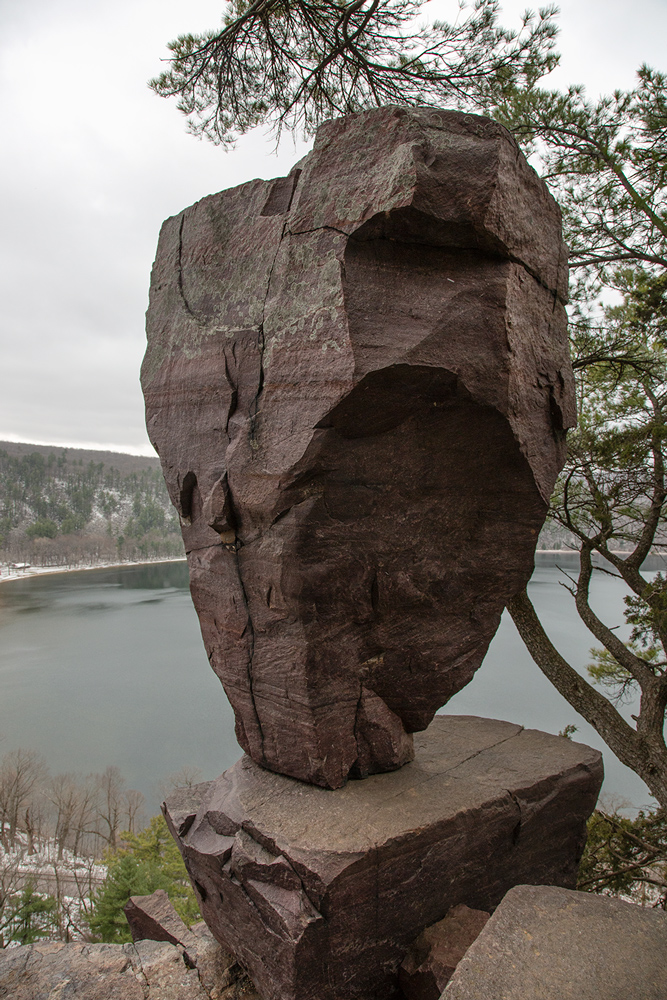 Additional photos of these hikes can be seen on Flickr.

Eddee Daniel is a member of the Ice Age Trail Alliance and a board member of Preserve Our Parks.