Lake Michigan is a flash of beauty in our daily lives. Glasslike and calm one day, raging with storm-surge waves the next, the lake is a sweeping spectacle, our shoreline the front-row seats. 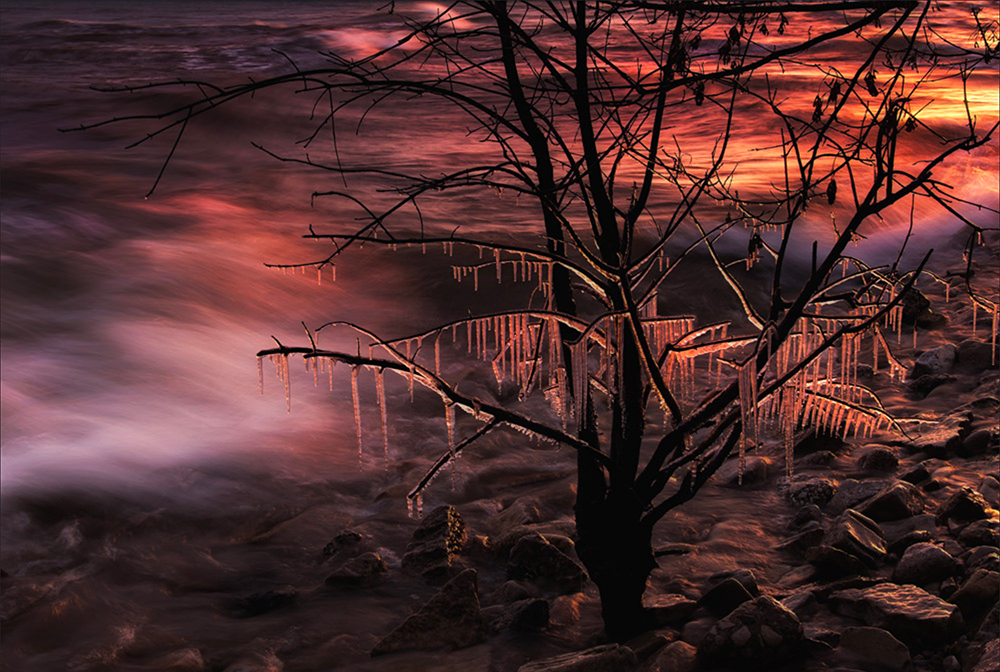 Time spent practicing the fine art of Lake Michigan gazing is rarely a loss but, as winter sets in, the curtain rises on the lake’s finest treats.

Truth is, it would be reasonable for the park district to erect an events sign along Lincoln Memorial Drive in late fall:

Notice: The year’s most outstanding landscape art exhibit will fill our eastern horizon for the next several months. “Memorable panoramas of clouds, waves and brilliant, low-angle sunlight. Exotic wildlife visitors from afar. Shoreline ice formations and drift ice offset by water tinted a zillion shades of aqua and sky tones ranging from mauve to electric blue. A compelling narrative of time and place. Kindly pull over and park for best and safe viewing.”

Even after watching the lake show for years, it can stun with surprises. Perhaps none is as striking as the dark wall of clouds, like a vast mountain range that arose overnight, that appears to our east the morning after the season’s first cold front crosses the lake. 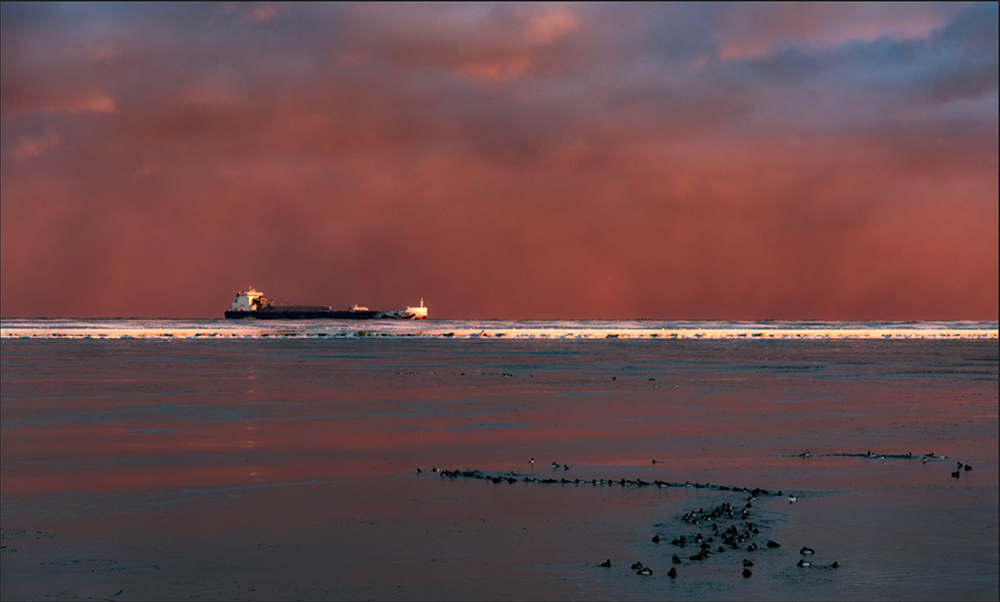 Meanwhile, closer inshore, hundreds of bufflehead ducks, recent arrivals from the far north, bob and dive in the waves. The males, as handsome as emperor penguins, are elegant in their tuxedo suits.

As the morning sun tops the cloud bank, the buffleheads acquire a flashy sheen and a swath of shimmering reflection stretches across the water toward the southeast.

That direct sunlight is a vivid reminder that the lake is my favorite setting for enjoying the winter sun.

I savor the winter sunlight, both for its light therapy and its sheer dazzling brilliance in the dry air. 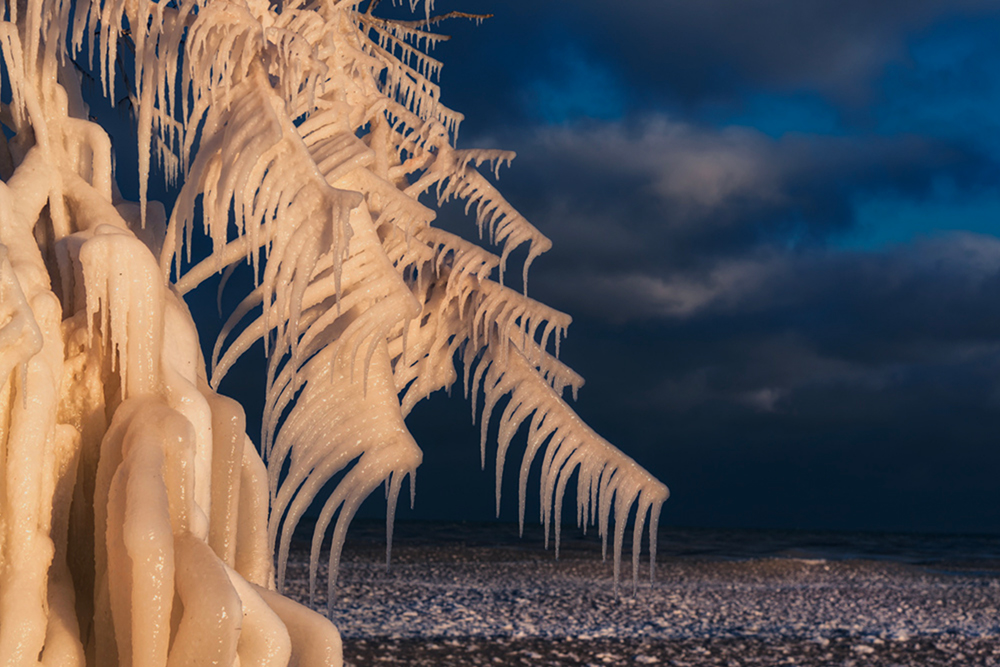 That light show and the lake scene hit a crescendo late on an early winter afternoon as the sun’s rays parallel the Bradford Beach shoreline. Shadows deepen and spread across the shoreline sand to the water’s edge.

Just offshore, the foaming waves and wheeling gulls turn a brilliant incandescent white in the late light, stark contrast against the dark backdrop of the mid-lake cloud bank.

Then, one by one, the waves lose their brightness. Finally, only the farthest whitecaps and the highest gulls retain their luster. 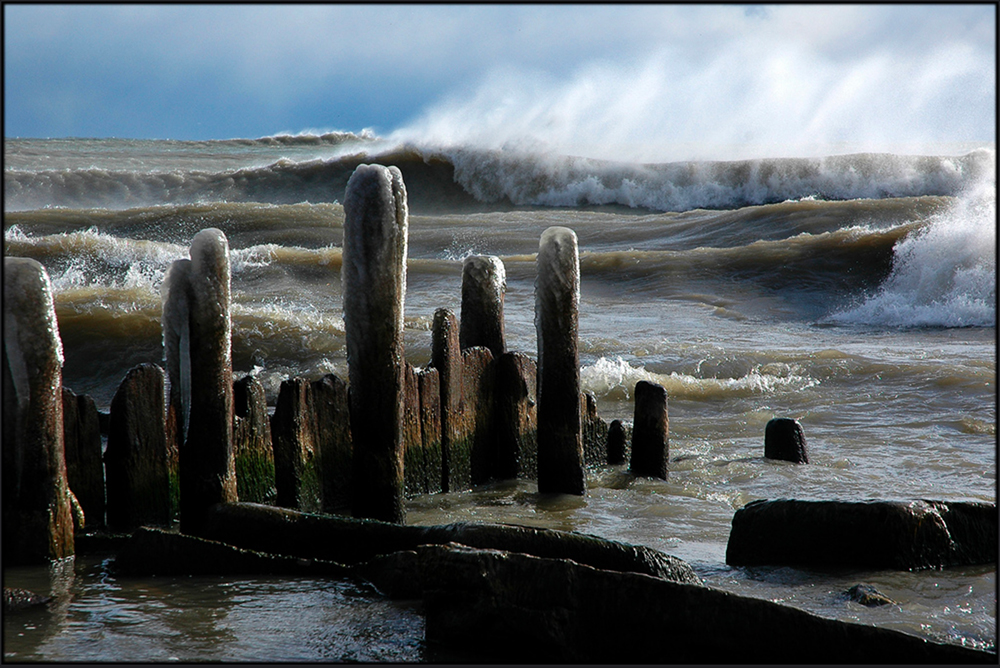 That early season show only gets better as winter arrives in force. North winds bring increasing odds that the ultimate wild card, a knockout of a visitor from the Arctic known as the snowy owl, will show up.

I had no trouble spotting one of these great white hunters that was putting in regular hours at the McKinley Marina several years back. His plumage was smooth as could be, a royal white cape that matched his regal pose as he perched on a breakwater boulder. Now and then his head would pivot so far it was eerie.

Friends who were on their way home from a concert late one evening stopped by to look for this raptor.

Just as the single digit temperatures were about to persuade them to leave, the snowy owl emerged from the dim half-light at the pier’s end. More of a ghostly apparition than a bird, the owl glided past them, a rodent dangling from its talons.

Snowy owls may be a scene stealer, but they aren’t the only mid-winter superlative in these parts. Frigid temperatures bring an abundance of ice, and the lake acquires a bold new dimension.

There is a daydreamy ebb and flow to the wanderings of pack ice. These large slabs, accumulating near our shore when east winds blow, seem to offer a fresh canvas every morning, as if a giant artist’s paintbrush of breeze and current had spent the night sketching arcs and other formations.

Viewed from the heights of our lakeside bluffs, the drift ice reveals another quality: nature’s own light meter, registering the deep blue of the water in the afternoon; rosy in the ever-changing planes of light at dawn.

Below the bluffs and their broad panoramas, a fantasia-like micro world of turrets, ridgelines and blowholes forms as shore ice builds. Storm-surge waves deposit layer after layer, a frozen diary of the season’s rowdy weather. Nearby, small chunks of lake ice add their wind-chime tinkle to the soundtrack as they ride the swells. 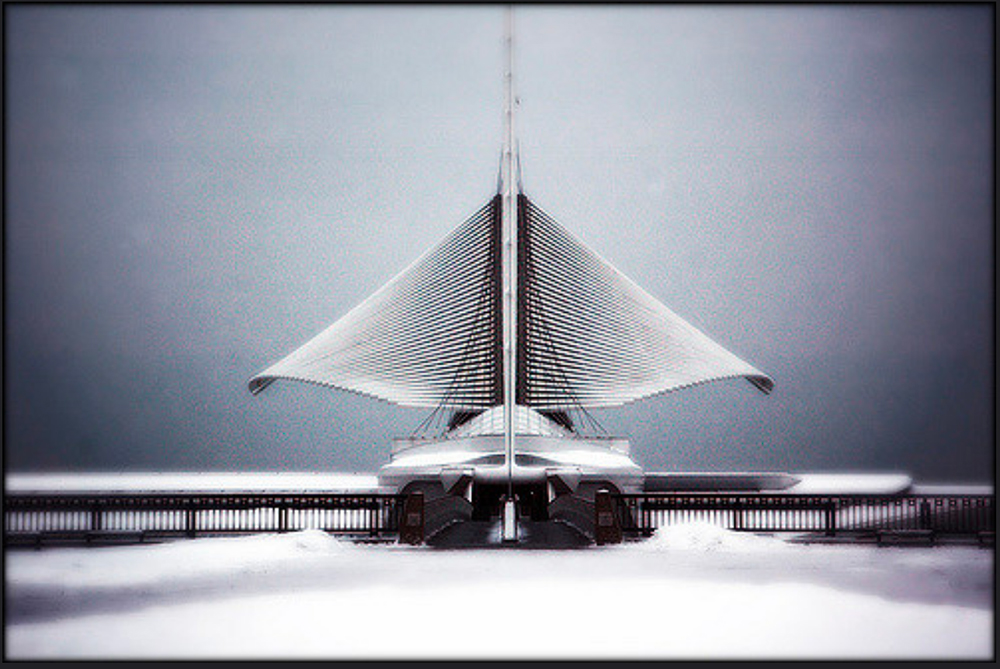 Milwaukee is a place of concert halls and snowy owls, art museums and ice floes. Just east of our town’s tall buildings is a shoreline where timeless panoramas unfold each winter.

Along that shore, and out on the big lake, the far north visits. Catch that sparkling magic before it’s gone. 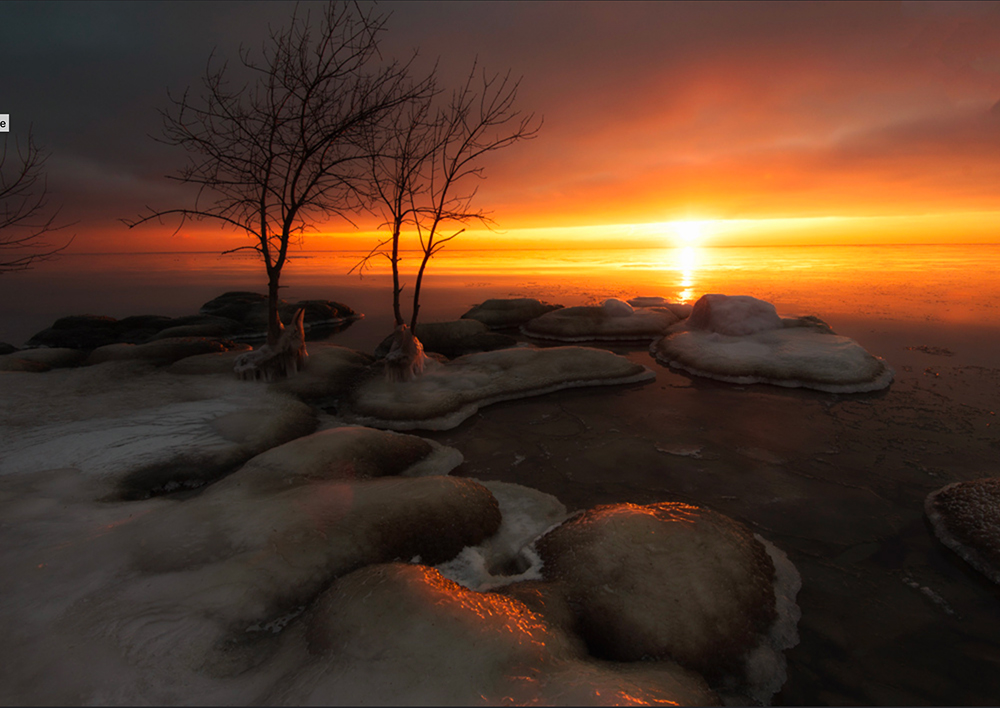 This essay was originally published in the Milwaukee Journal Sentinel on Jan. 8, 2006 and aired on Lake Effect on Jan. 2, 2009, where you can listen to the audio file.

Tim Holte is a photographer who enjoys documenting the world around him; most of his photos are taken within a few miles of where he lives in Milwaukee.