The Plunkett Observatory has a 20-inch, fork-mounted Newtonian reflector telescope, named for its benefactor, Alvin Panarusky.  The telescope that weighs over 2000 pounds. The telescope is designed to provide an extremely stable platform for instrumentation. The observatory also houses a second telescope, a five-inch refractor, which is used primarily for digital imaging. During times when the building is open to the public, it is used for visual observations, in addition to the larger telescope.

The  Northern Cross Science Foundation (NCSF), which operates the observatory, is one of approximately a half-dozen amateur astronomy clubs in Southeastern Wisconsin. The club dedicated the Jim & Gwen Plunkett Observatory in 2007 at Harrington Beach State Park. By agreement, the NCSF donated the observatory building to the state. As with condominium living, the club owns everything attached to the walls and floor. The state owns the structure. The club maintains the building and it can remove the telescope and building contents if needed.

The building was funded completely by private donations and is operated by volunteers, each a member of NCSF. In order to erect a private structure on public land, the club entered into an agreement with the State that it would be made open to the public twelve nights per year. 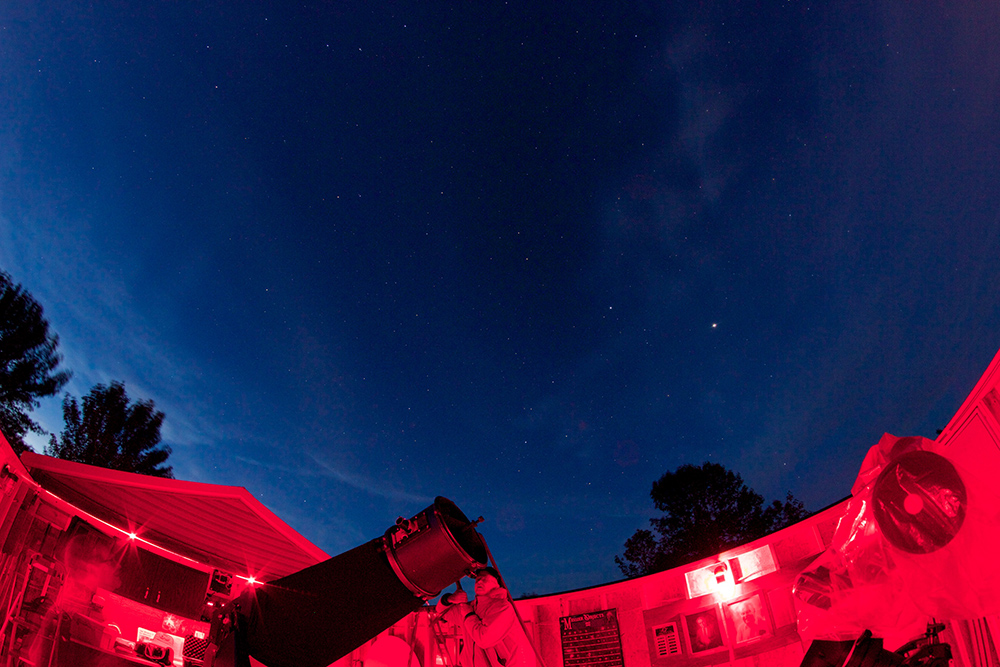 The telescope and night sky from inside the observatory

For about sixteen nights a month, there is enough darkness in the sky for amateur astronomers to enjoy observing “faint fuzzies:” nebulae, galaxies, globular star clusters. The moon is too bright on other nights to do any effective observing of deep space objects. This photo was taken on such a night. On 8/7/2014 at 11:00 pm, the moon was 89% illuminated. No astronomer would ever reserve the observatory on such a night. Except THIS astronomer!

NCSF is a tax-exempt 501(c)(3) non-profit astronomy club devoted to public outreach. Typically, it is open to the public 20 or more times per year. There are scheduled openings, night-time events put on by the Friends of Harrington Beach State Park (such as Haunted Hike and Ski & Stars), as well as when special celestial events occur (e.g., solar/lunar eclipses, etc.). NCSF is an arm of the Friends of Harrington Beach State Park.

In order to assist the public, some NCSF members have been trained how to open the roof and operate the telescopes. There are enough trained volunteers to cover all scheduled dates plus special requests by campers for it to be opened. Usually, many other club members set up their telescopes in the parking lot next to the observatory as well. Visitors are encouraged to look through every telescope set up, to experience views through the variety of scope designs and sizes. 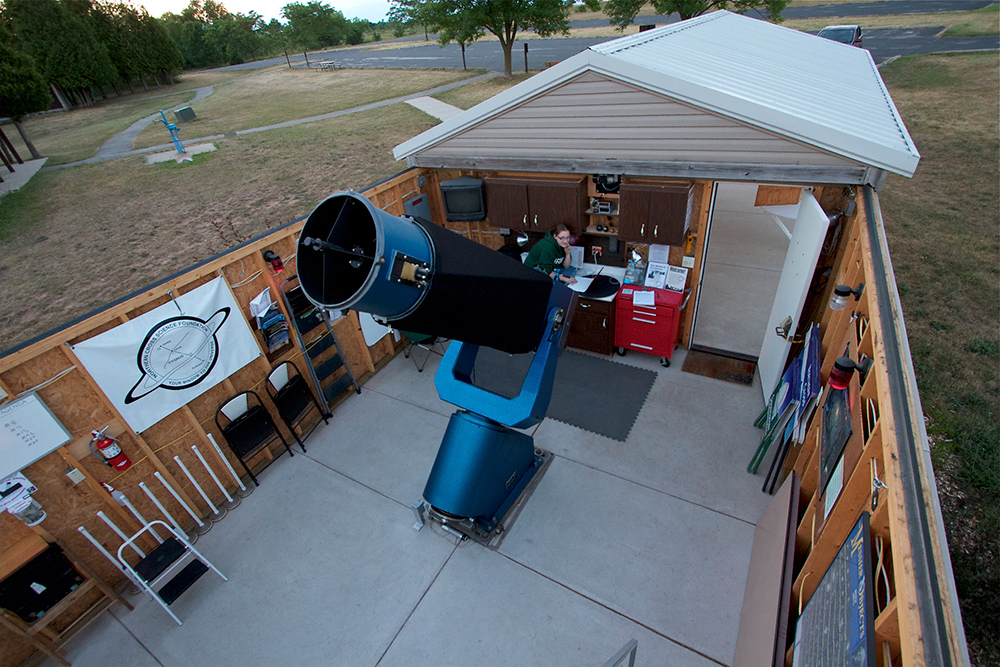 The telescope and interior of the observatory with its roof open

The Plunkett Observatory has a roll-off-roof instead of the more familiar dome. There are several advantages to this arrangement: Where the mission of an astronomy club is public outreach, a roll-off roof provides a clear view of the entire visible sky for all visitors, whether or not they are looking through the telescope. It permits the setup and use of additional telescopes within the observatory. And visitors who are waiting their turn can be educated and entertained by the club’s host astronomer, who can also point out features of interest in the sky using a laser pointer. In short, everyone in the building can look up and enjoy the night sky.

By contrast, in a domed observatory, the narrow shutter is slid open only enough to allow the telescope to peer through. It is designed to minimize air currents and stray light, which is a benefit when performing astronomical photography. The dome design is tailor-made for a single observer (as opposed to a crowd.)

Flyers with information about the organization and scheduled openings are available outside the observatory. The flyer is also downloadable from the NCSF website.

Robert M. Powell is a photographer and a member of Northern Cross Science Foundation. He lives in Mequon, WI.

Note: This story was submitted to A Wealth of Nature on our submission page, Share your story or photo. Do you have a story or photo to share? We’d love to know about it.