Risë Andersen is one of 12 artists participating in a year-long residency program called ARTservancy, a collaboration between Gallery 224 in Port Washington and the Ozaukee Washington Land Trust. Each artist has selected an OWLT preserve to spend time in and to engage with. To read more about the artist in residency program, click here.

I believe I am falling in love.

It is such a delight to find small wild places such as this so close in proximity to our urban environments. Sauk Creek Nature Preserve is in my home town of Port Washington and I have been here in the past, but this residency has given me new insight and the opportunity to interact with it in a very different way. 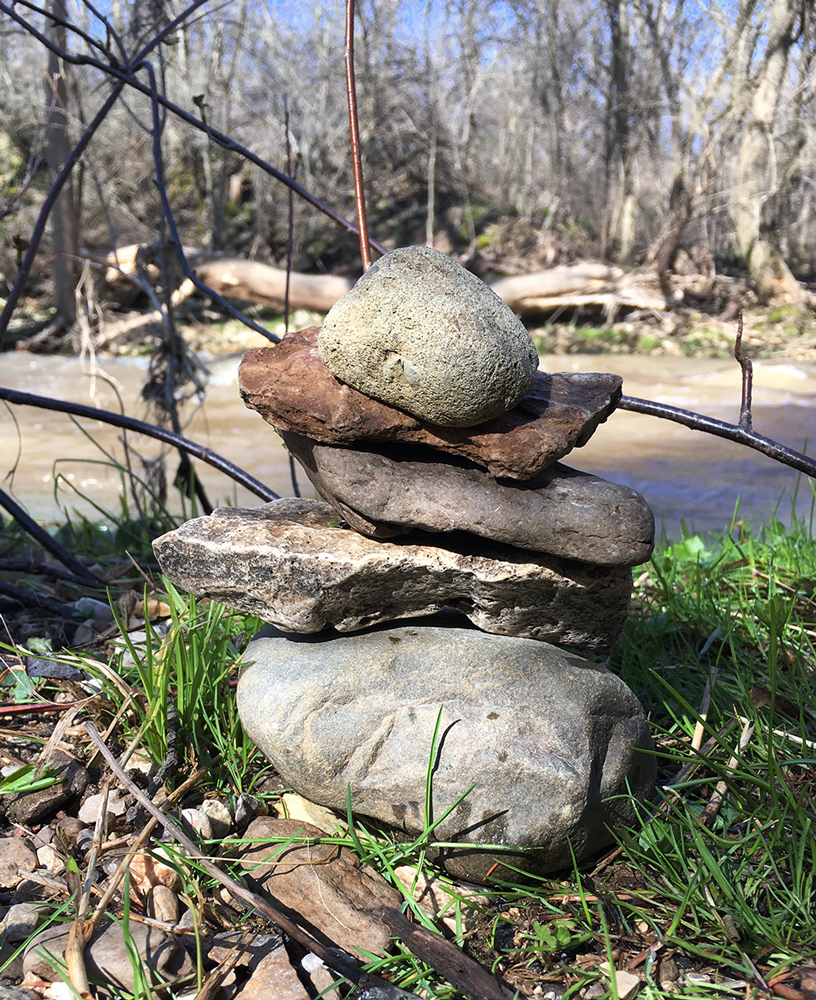 Walking the trails with a friend one day, we discovered a sapling with an unusual formation. Questioning its origin led us to a discussion of “hobo markings” that were left behind by hobos to show the way. I stored this information in my brain as I tried to imagine the idea as something I could use or work from. In early autumn, on my next walk along the creek, I chose a place to sit and take in the essence of the preserve. In turn, I picked up a few rocks and left them as a dolmen.

What does it mean to leave behind evidence of oneself? I found my intent was meant to be impermanent. A project to witness as time progressed.  I would go to the preserve and listen for materials to whisper to me and for the chant that lures me to the space where I will leave my “marker.” This became my practice for the residency.

On another day the vertebrae of leaves lay scattered over the path as I walked. Their volume called to me. I collected handfuls and left a ‘marker’ that was a nest of sorts, three-sided. I have always been attracted to the fabrication of nests. These simple materials transformed by creatures without hands into some of the most fascinating structures. This one is not meant to fascinate; merely to mark a moment in time and space. The structure would not have withstood the raising of nestlings, but for me it marked that I was here. 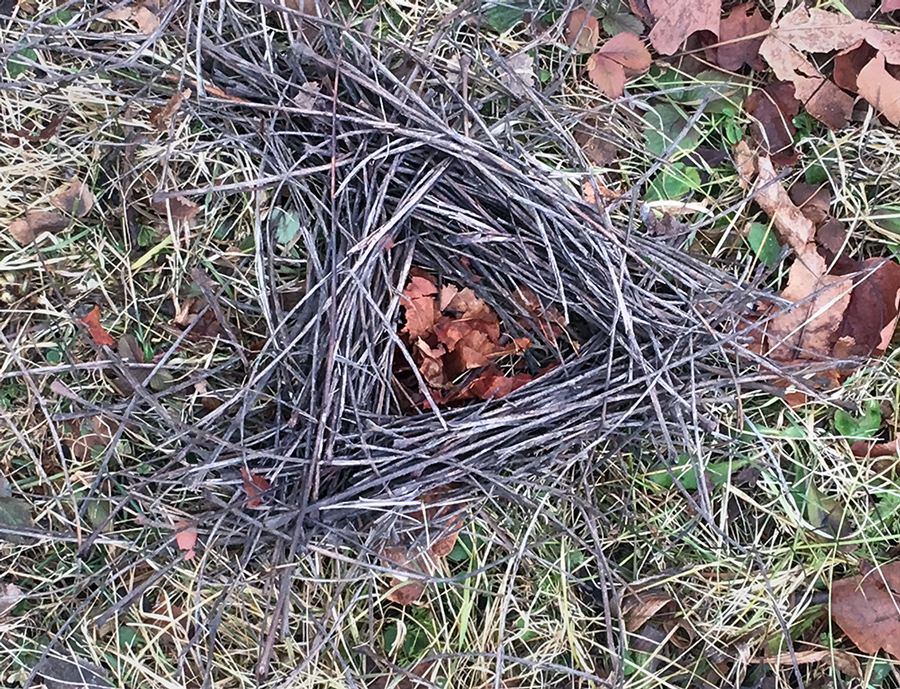 Winter came slowly. First it grew cold, while the ground remained free of snow. Pines line the northern border of the ridge and it was here I heard the chant that day and gathered up some larger branches that lay scattered over the ground. These became a tepee shape and in their crux they held a nest of skeletonized pine boughs. Again, it would have been insubstantial for a bird, but this is more about process and a way to connect than a fully fleshed out object. 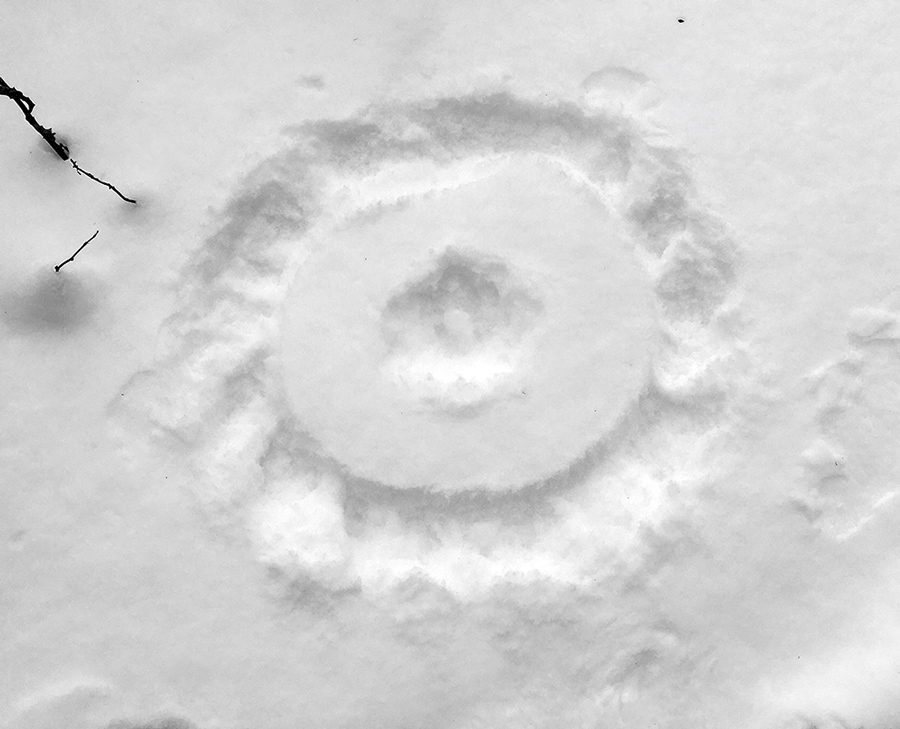 After the snow had finally come I took a walk and found my gloved hand carving out a simple circle, leaving a dot at its center. This is an old totem for the sun. It had warmed me on that frigid day. My “marker” that day was a gesture of gratitude.

Over these past months I have made quite a few of these “markers.” Some I have had to rebuild and one has nearly disappeared. I believe that one became nesting material for another creature. I am excited when I find them still standing. I debate whether I should rebuild or start another if they have been demolished. It is a practice that connects me to this place and I consider it to be a collaborative endeavor. My criteria have been that all materials used should come from this landscape, with nothing extraneous or processed. My intent has been to interact with the preserve as I witness it, and not leave too much of myself behind.

Sauk Creek was the first parcel of land purchased by the Ozaukee Washington Land Trust and also the one that is most used. I have found that to be difficult at times in my relationship to it. I’ve discovered that I wasn’t always happy sharing this space. I go to observe and commune with nature. Once, when 50 youngsters overran the property on a field trip I lost my hold. However, those children are exactly why the land trust exists and continues its work.  It was the best example of the value of these spaces for all of us.

I have walked these paths for two seasons now. I have been here after heavy rain and seen the creek at its full force. Two weeks later I found it running at its usual pace, shooting over the dolomite ledges that create Wittmann Falls. These falls are not grand like the Niagara, but they are picturesque and beguiling. They are all ours.

I am thankful that I was one of the artists chosen for this experience. One does not know the future and I have been pleasantly surprised how this project has inspired and encouraged me. I believe this love affair will last long after the residency is over. 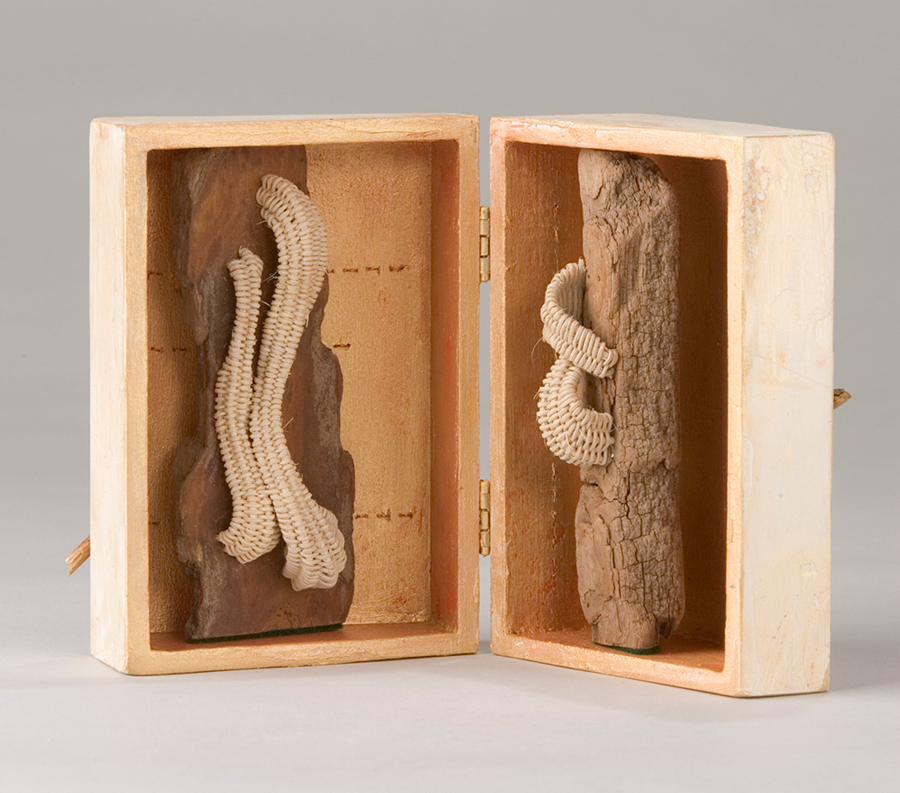 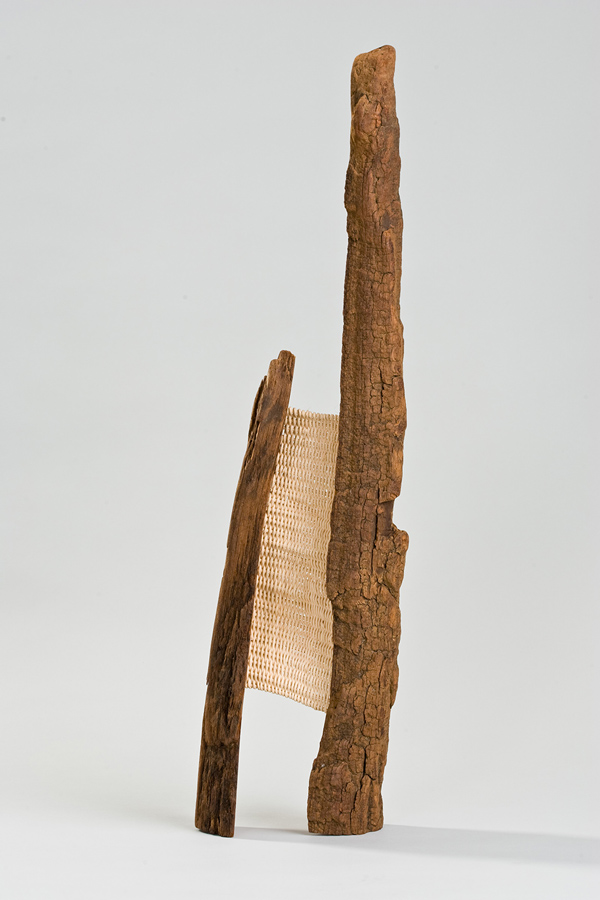 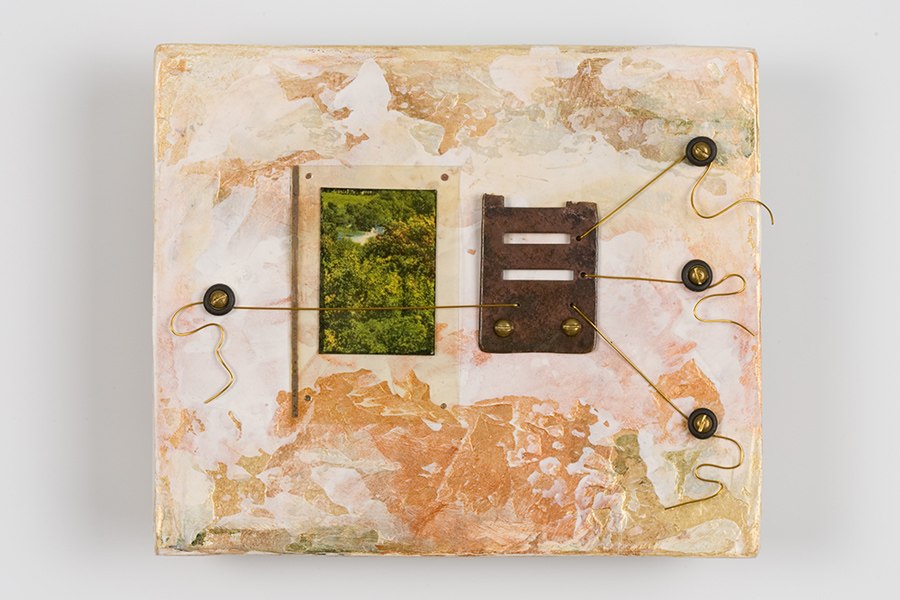 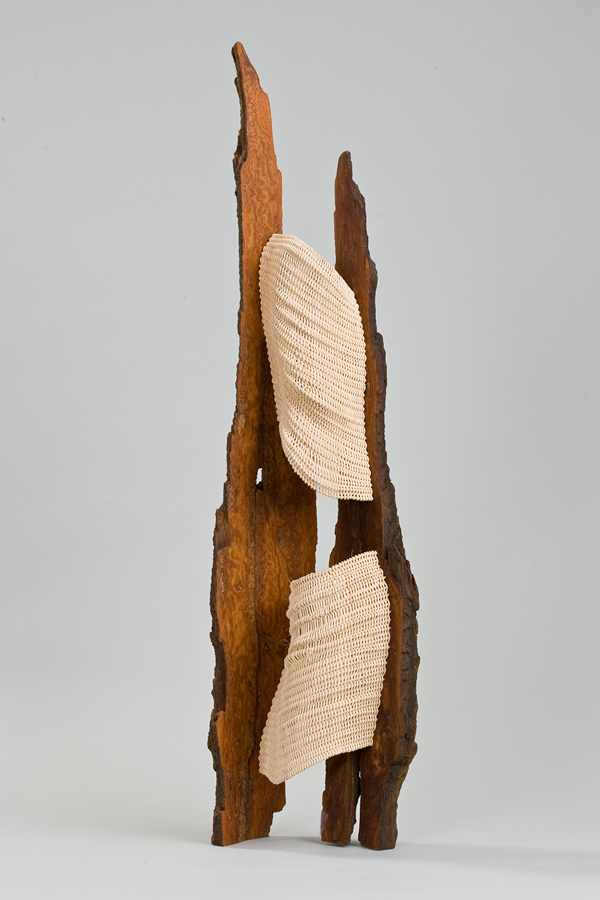 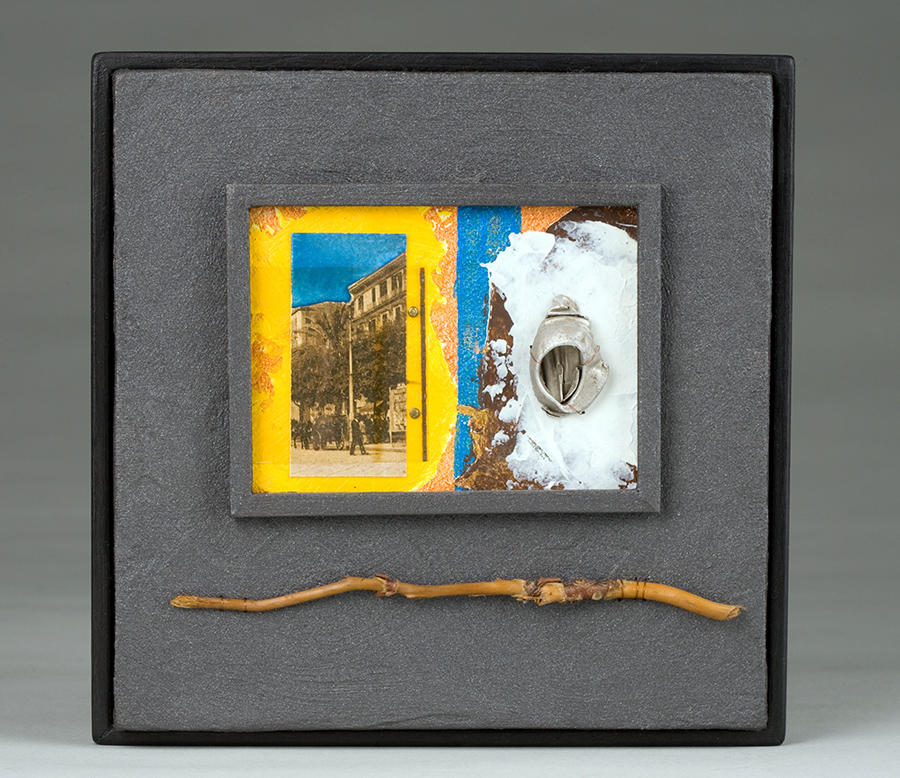 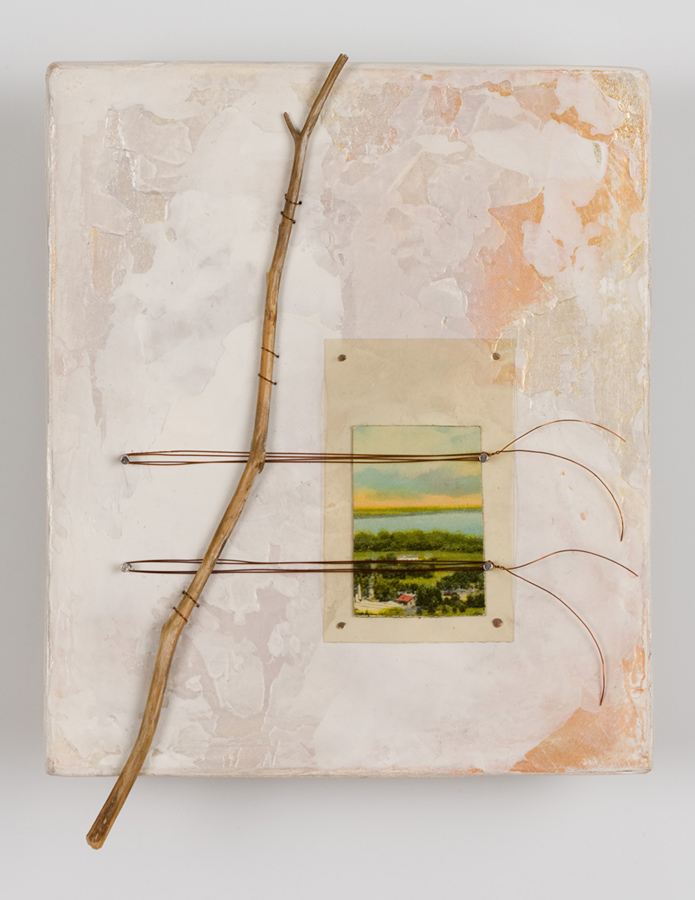 Risë Andersen is a native of Port Washington. Her work has been exhibited across the country over the past 35 years. She has won numerous awards including two Wisconsin Arts Board New Work Grants, Lakefront Festival of Arts Award of Excellence, Best of Show at the Wisconsin Painters and Sculpture Exhibit at the Lyndon Sculpture Gardens, and a Residency at ARTPARK, Lewiston, NY. Her work is included in the book 500 Baskets and a variety of other publications. 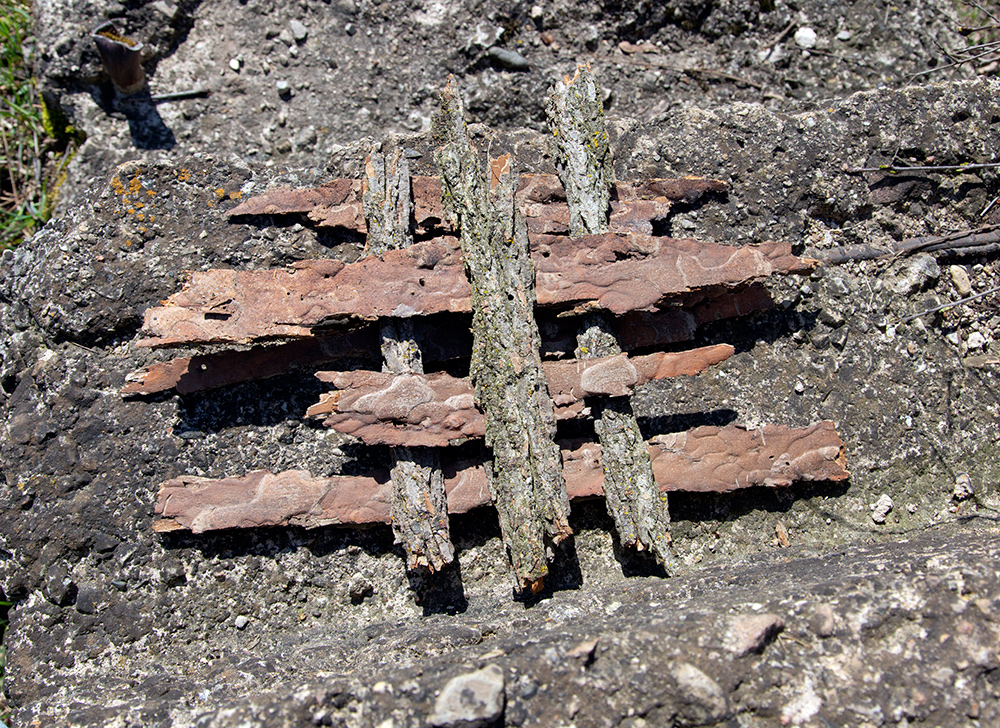 This is the latest is a series of featured artists in The Natural Realm, which is intended to showcase the work of photographers, artists, writers and other creative individuals in our community whose subjects or themes relate in some broad sense to nature, urban nature, people in nature, etc. To see a list of previously featured artists, click here. An exhibit of the work of ARTservancy artists in residence is scheduled to open at Gallery 224 on September 13, 2019.

All images courtesy of the artist, except as noted.

Featured photo of the artist walking in Sauk Creek Nature Preserve is by Eddee Daniel, a board member of Preserve Our Parks.