Floating down the Bark River with Flotilla

The day is magnificent, with clouds filling the sky like exploding popcorn. I arrive “at the crack of noon,” per the invitation, then float around Lower Nemahbin Lake with a growing contingent of kayaks and canoes, waiting for stragglers. By the time we set off our number have grown to 27 people and one dog. 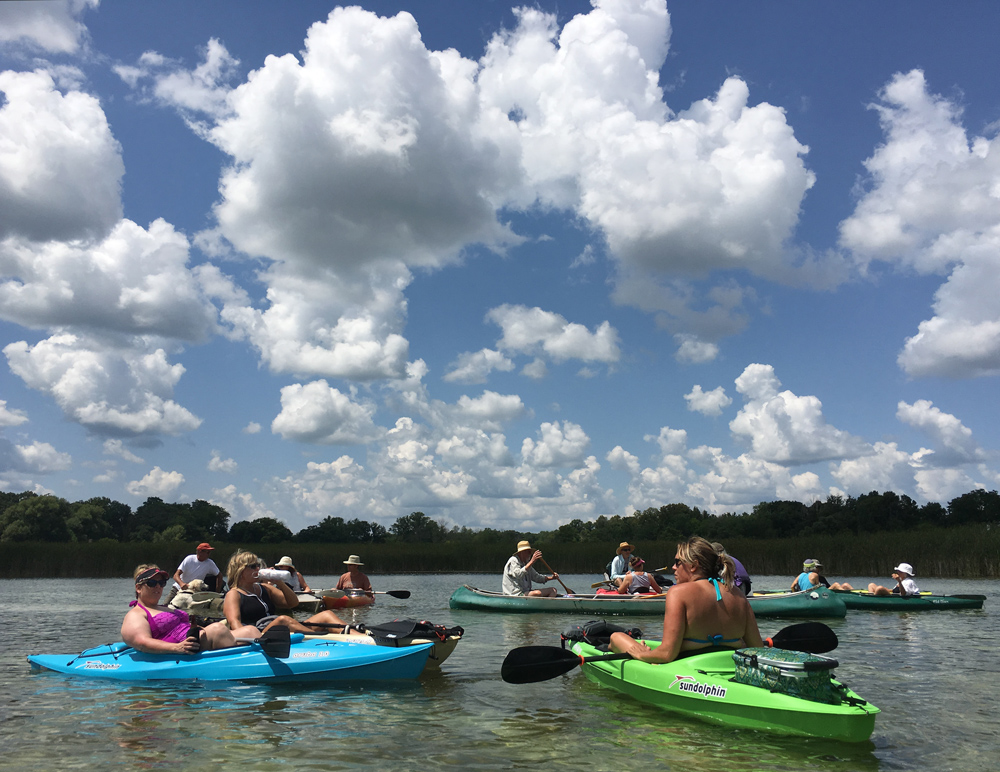 The annual outing is known to the initiated as “Flotilla,” with an emphasis on the “Float.” Don’t come if you’re in a hurry—or expect the paddling to amount to some kind of exercise. An experienced and energetic kayaker might paddle from Lower Nemahbin to our take-out point on Genesee Lake Road in an hour. Flotilla manages to make it an all afternoon affair. 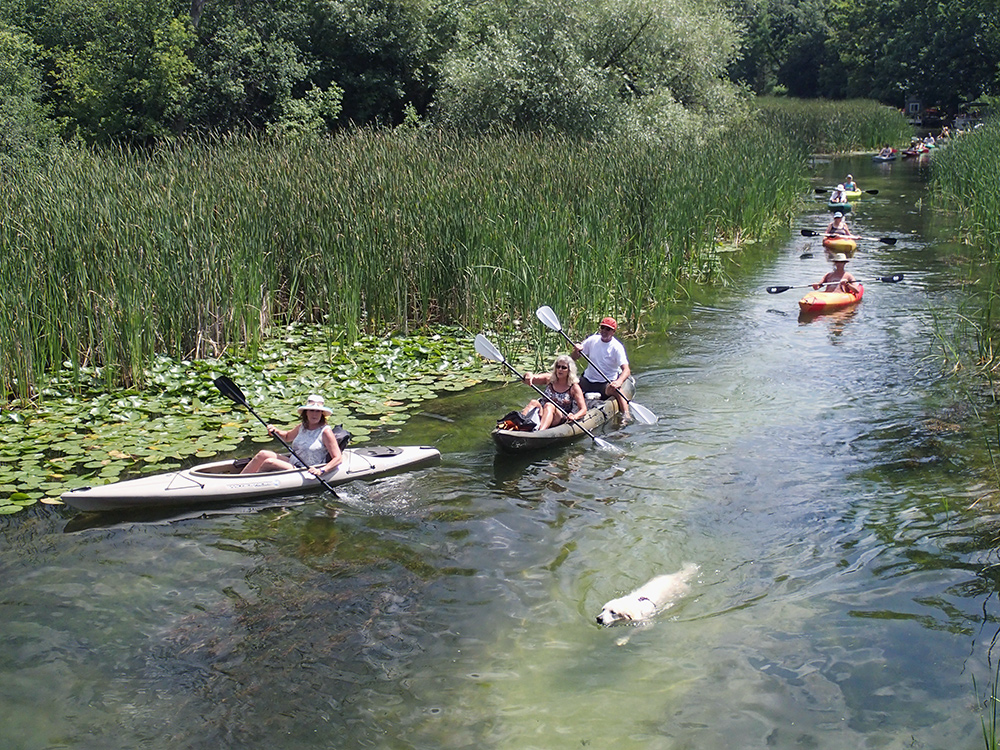 This stretch of the Bark River is ideal for the purpose. There are no rapids and yet a steady current absolves the company from the necessity to paddle, except to steer around the seemingly endless oxbows. The channel is seldom too deep to comfortably stand up in, and, in fact, hopping in and out of the boats is a frequent activity.

The first leg of our trip is between the lake and Sawyer Road. The channel here is narrow and tall cattails create a tunnel-like effect. At one point another, narrower channel enters the river. Being inquisitive, I paddle the short distance around a bend to discover a small but very deep pond. A family in a row boat are there, fishing. From The Bark River Chronicles, a book about the river, I’ve since learned that this “Blue Hole,” as it’s known, was created by marl miners. Marl is a kind of limestone. But I digress. 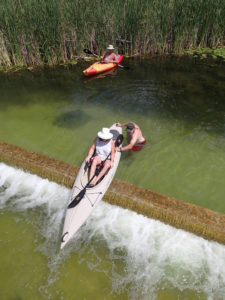 The only impediment to our float comes as we approach the Sawyer Road bridge where the river drops about a foot over a small dam. Most of us portage around it and over the road. With a little help a few manage to slide their boats over the top of the dam. However, the riskiness of this maneuver is confirmed when one tips her kayak in the attempt and spills out into the shallow water. 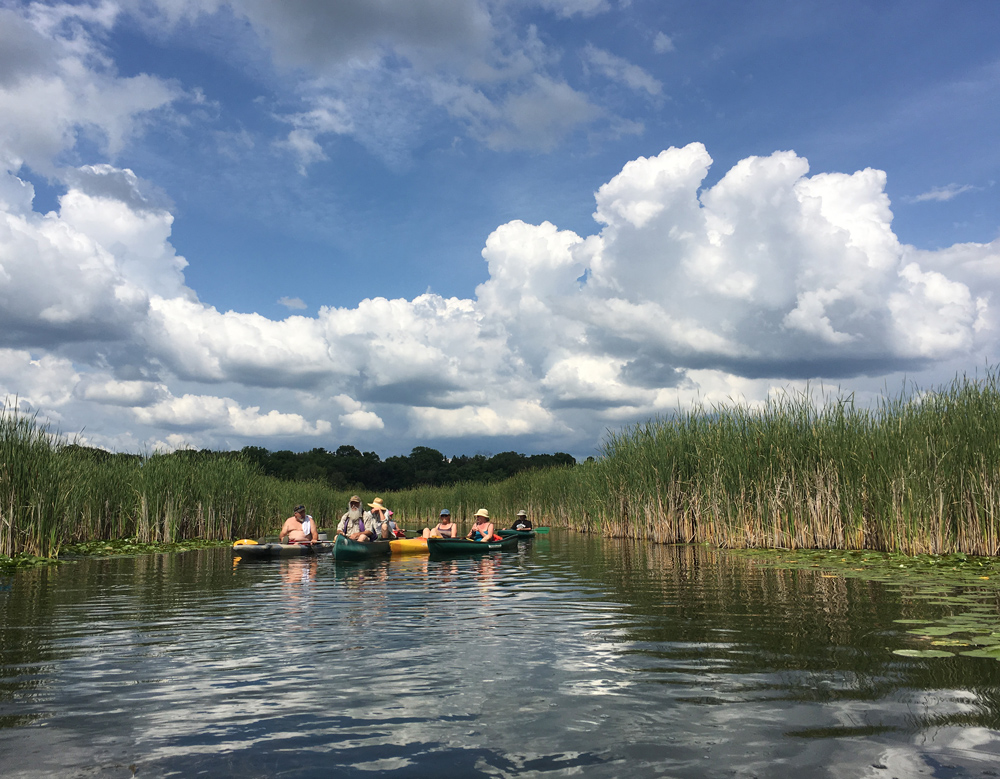 The second leg, which runs through a huge cattail marsh surrounded by low, wooded hills, is the longest. It also feels remarkably remote. The row of houses on the riverbank near Sawyer Road is the last sign of civilization until we reach Crooked Lake. You can imagine being up north instead of suburban Waukesha County. 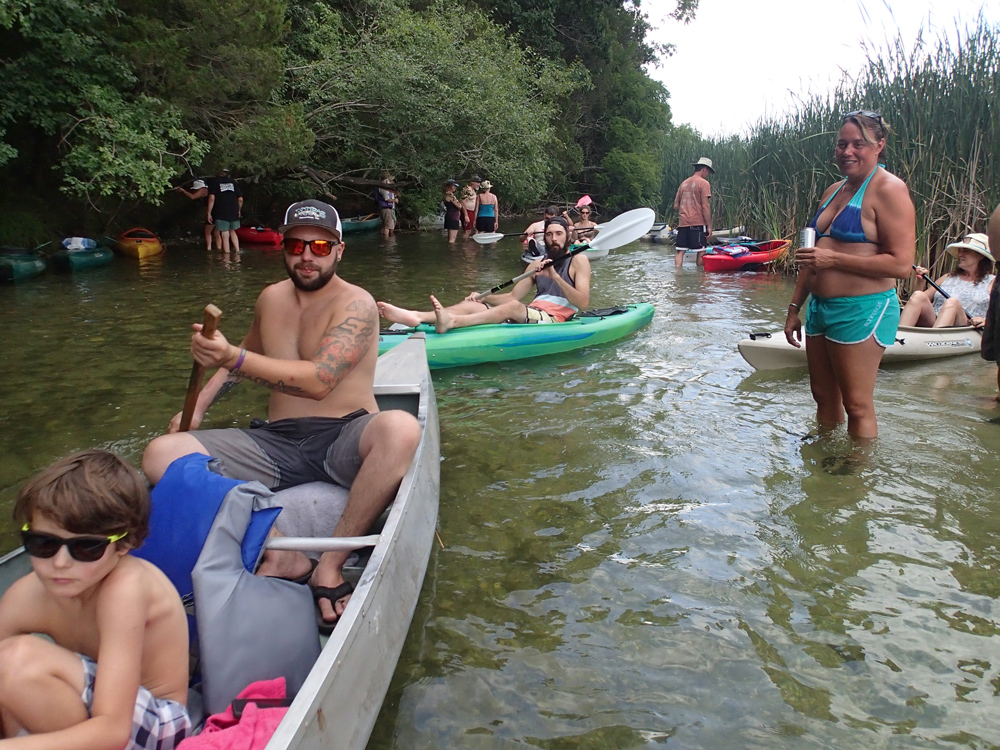 It would feel remote, that is, if not for the traffic! Back at Lower Nemahbin, which is very popular for recreational boating, I was not surprised to see how busy the lake was. The congestion on the river was surprising. The last time I went with Flotilla, many years ago, we had the entire river to ourselves. Then the Bark River seemed like a well-kept secret. This time we are rarely out of sight of other paddlers, going upstream and down.

The clarity of the water is a bonus. Most of the way the silty river bottom is clearly visible, along with a variety of small and occasionally larger fish. Somewhere along the way I spotted a long, thin one that must have been 18 inches. I’m not good at fish identification but it might have been a pike or gar. 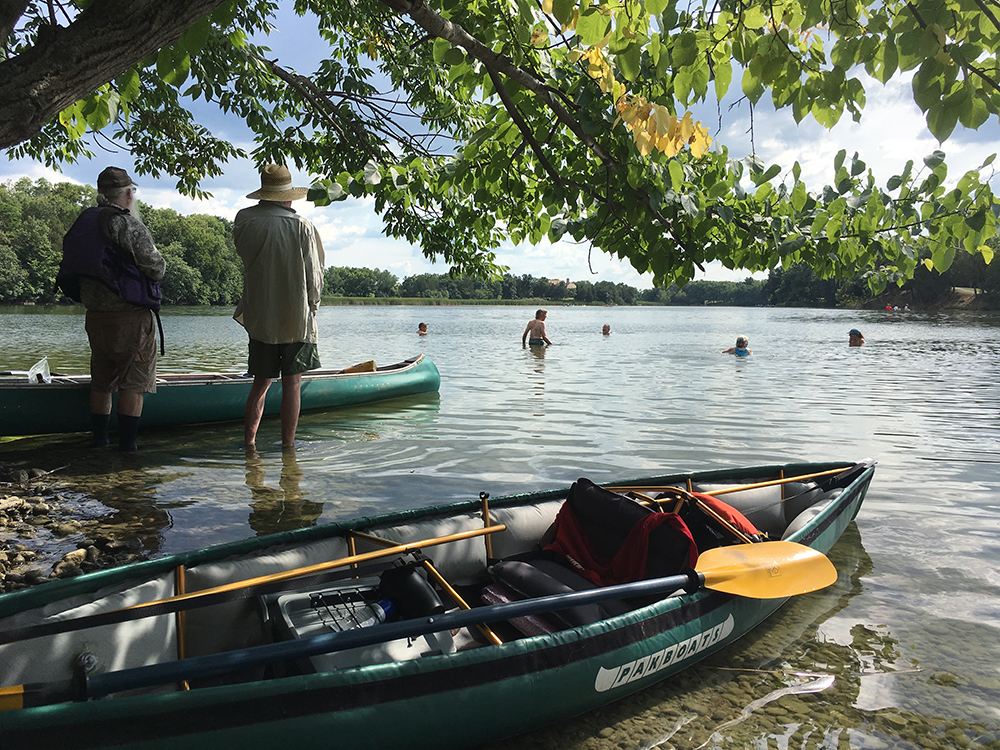 Large houses come into view as we enter Crooked Lake. They line the western shore. Although smaller than Lower Nemahbin and having no public access, there are quite a few other watercraft on the lake, from paddle boards to outboard motors. We beach our boats on the rocky, undeveloped eastern shore and take a swim. 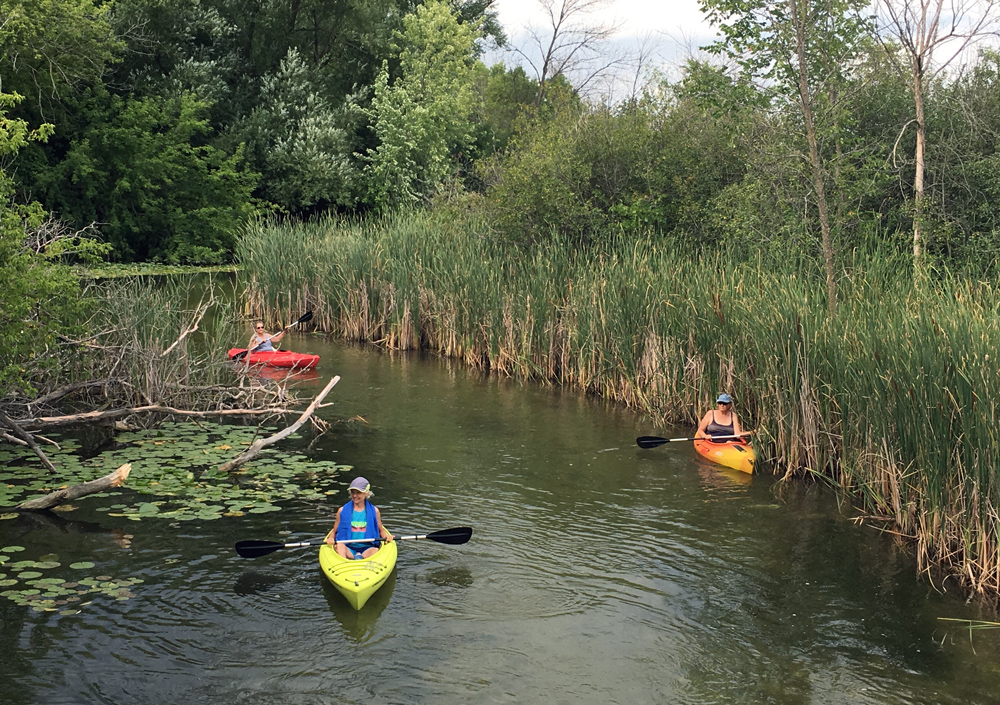 The last leg of our journey is another twisty series of oxbows. We spy a fawn along the edge of the water. Hemmed in by a wall of cattails, it is crying for its mother, who is visible onshore nearby. The fawn slips into the cattails and disappears. We reach the take-out point on Genesee Lake Road at rush hour, or so it seems. There is a traffic jam of cars and trucks loading up their boats and gear. 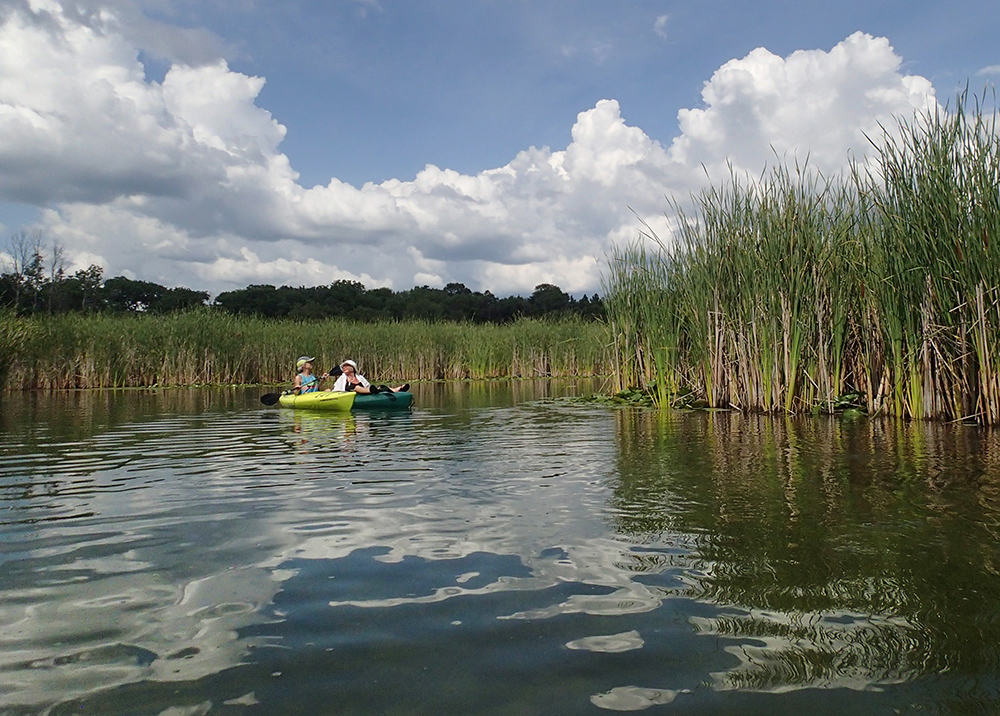 Maybe it’s the ideal conditions but I believe it’s a sign of the times: communing with nature in the form of paddling on a beautiful river is clearly popular. Good reason to protect the Bark River, to maintain its virtual remoteness and preserve the water quality for future generations.

See additional photos of the Bark River trip on Flickr.

Eddee Daniel is a Preserve Our Parks board member and project director of A Wealth of Nature.