Wauwatosa’s Sanctuary Woods has been in the news a lot in the past two years as residents have reacted to a controversial Master Plan proposal that when first proposed would have destroyed significant portions of the parcel. The good news is that the plans have been changed to preserve more green space. Meanwhile, the land itself remains something of a mystery to many in the community. This was the motivation for creating an interactive map of the place. 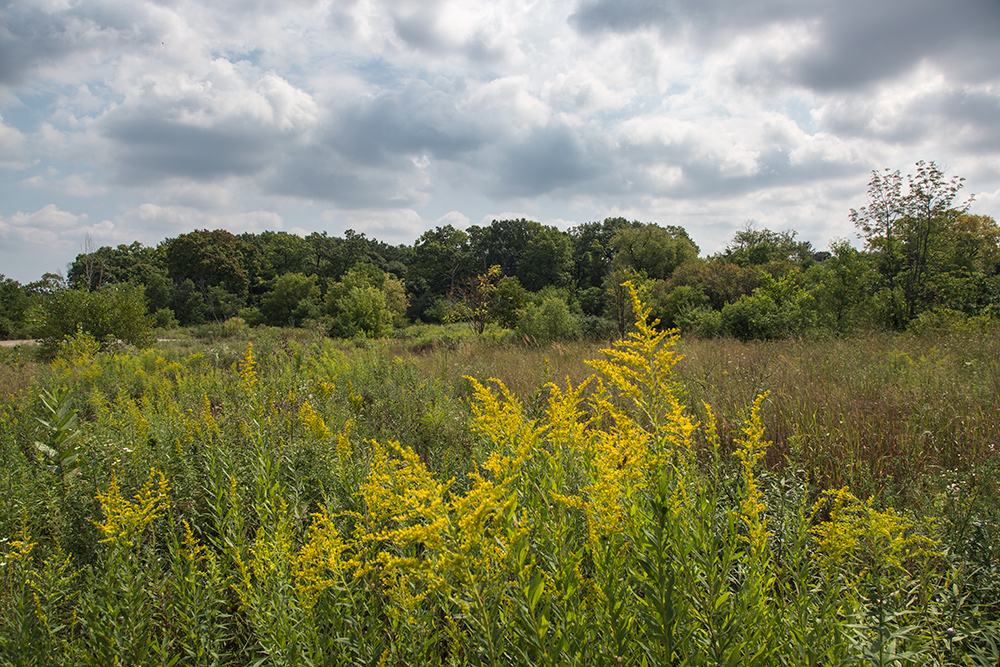 The map identifies and describes dozens of fascinating locations in and near Sanctuary Woods. Each entry connects a location with historic or contemporary photos as well as a description. Together, these assist visitors in bridging a century of history with the infrastructure and natural beauty that remains. 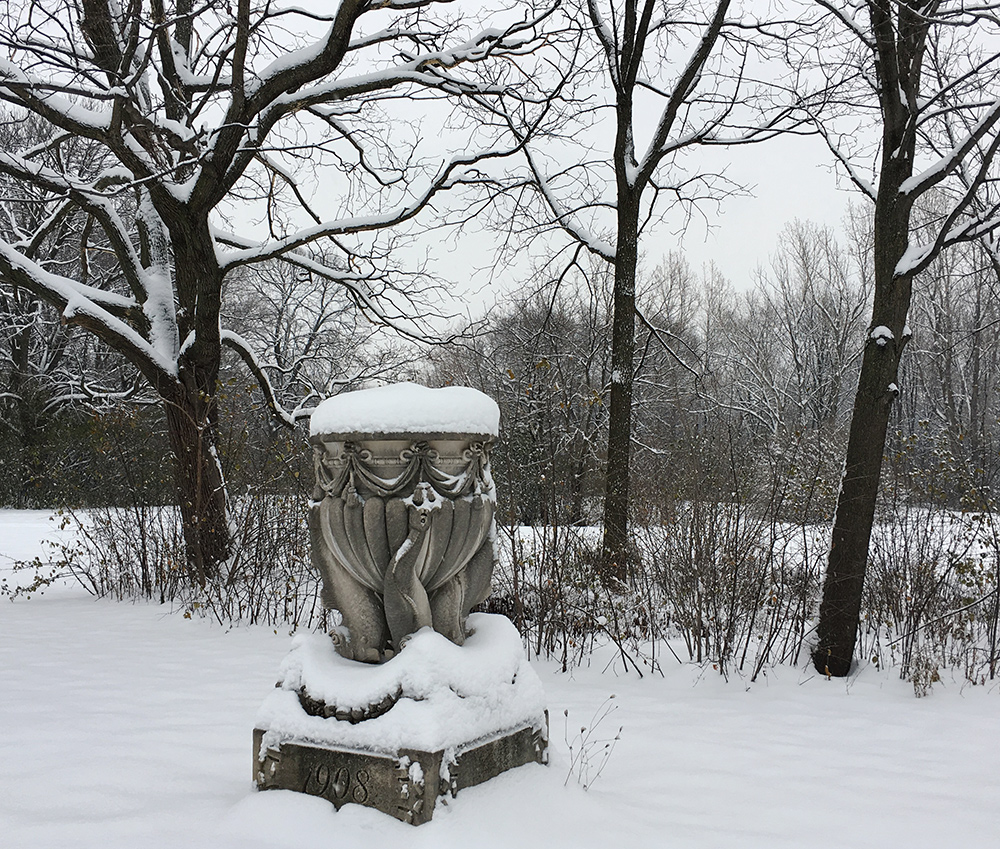 It aims to answer such questions as, what are the origins of a 6-foot tall sculptural dolphin urn sitting next to a meadow that used to be a lake? Or how a crumbling cement porch used to look out over sunken gardens. 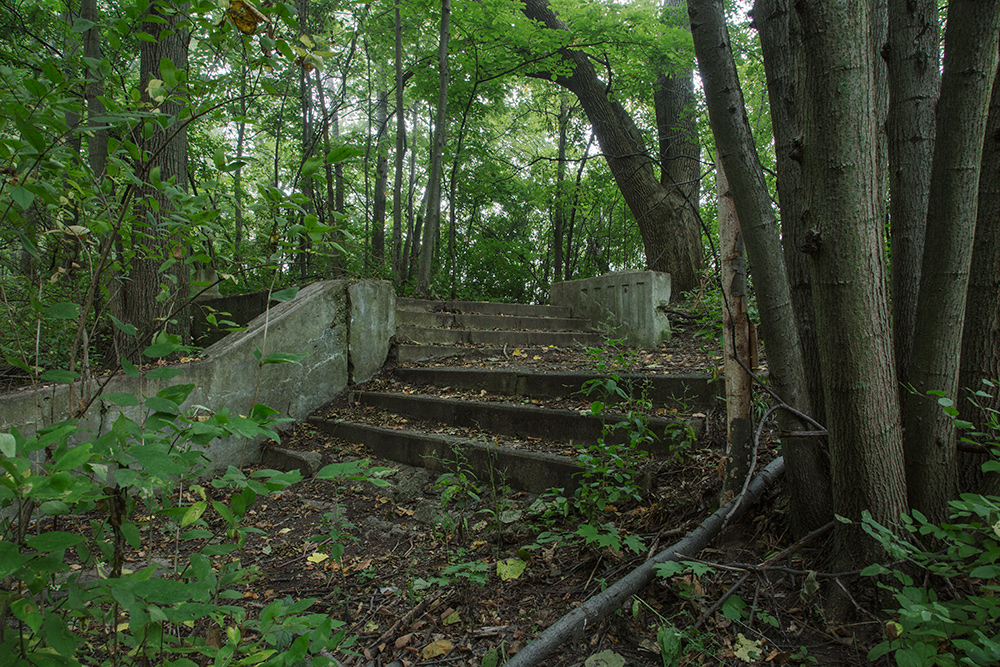 The Milwaukee County Grounds were established over 160 years ago. Historically, the land spanned over 1,000 acres in the four quadrants surrounding today’s I-45 and Watertown Plank Road interchange. Over the years the majority of the land has been developed. Today less than 300 acres of open green space remain on what is known as the Northeast Quadrant, which lies between Watertown Plank Road and the Menomonee River Parkway. 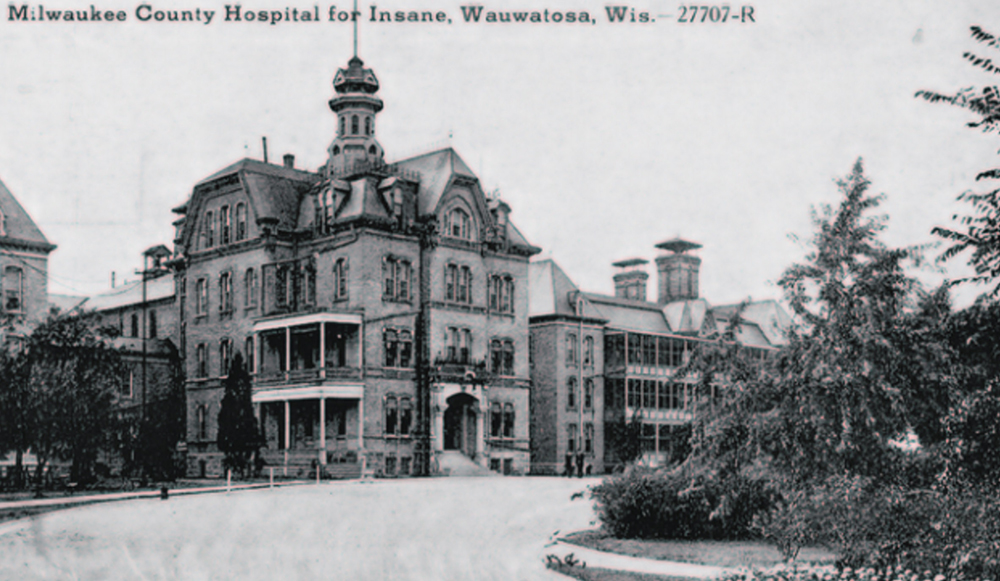 Milwaukee County Hospital for the Insane, circa 1916

The southeast corner of that is the 66-acre “Sanctuary Woods,” which consists of an ancient oak savannah, as well as recovering woodlands and wetlands. In the late nineteenth and early twentieth century, portions of these woods served as a retreat for patients in the mental health hospital that was located on the grounds. Remnants of the pathways, patios and stairs that once served these patients are among the intriguing artifacts to be found in the woods. 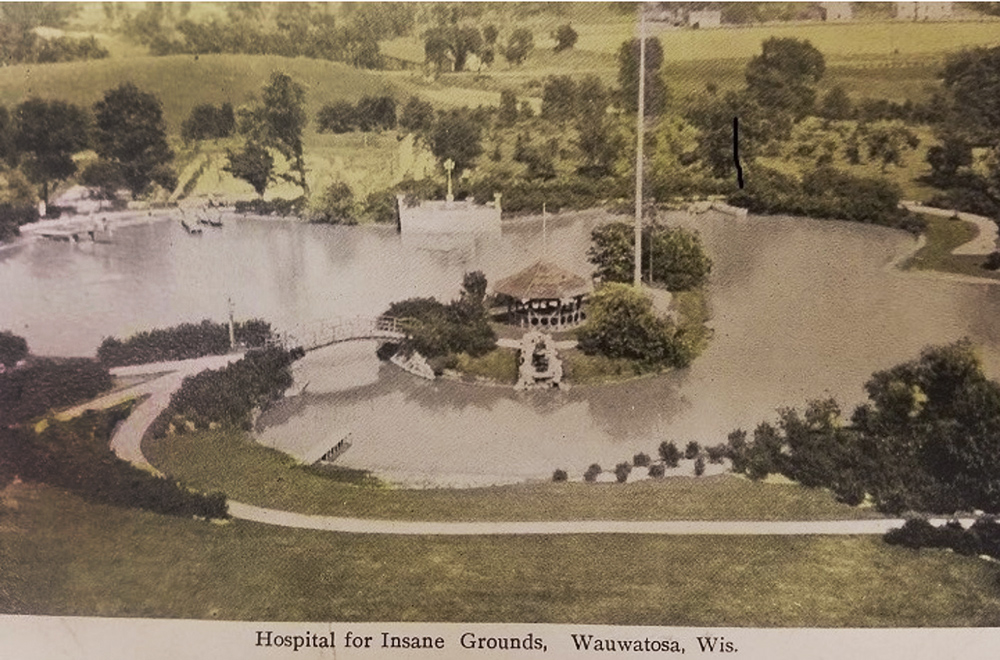 Hospital for the Insane grounds, circa 1930 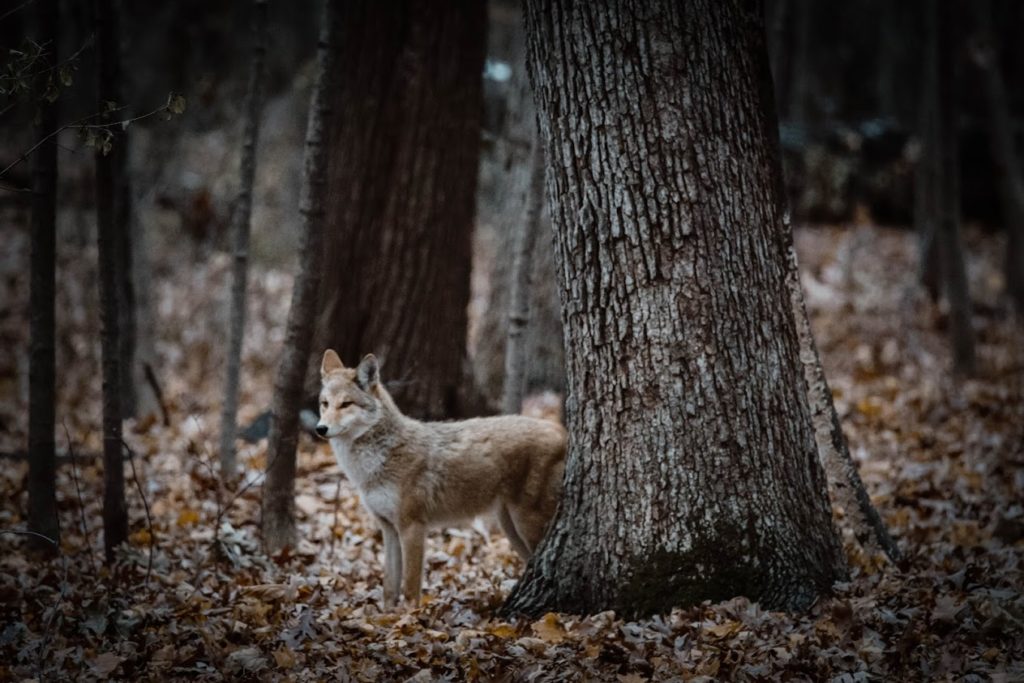 Access is possible either from 92nd Street, next to the power plant, or from 87th Street, which curves around and runs between the woods and the East Detention Basin. There is a network of informal paths but no official signage. Depending on the season and the stillness of visitors, wildlife may be observed, including deer, coyote, long-eared owls, hawks, and Butler’s garter snakes. 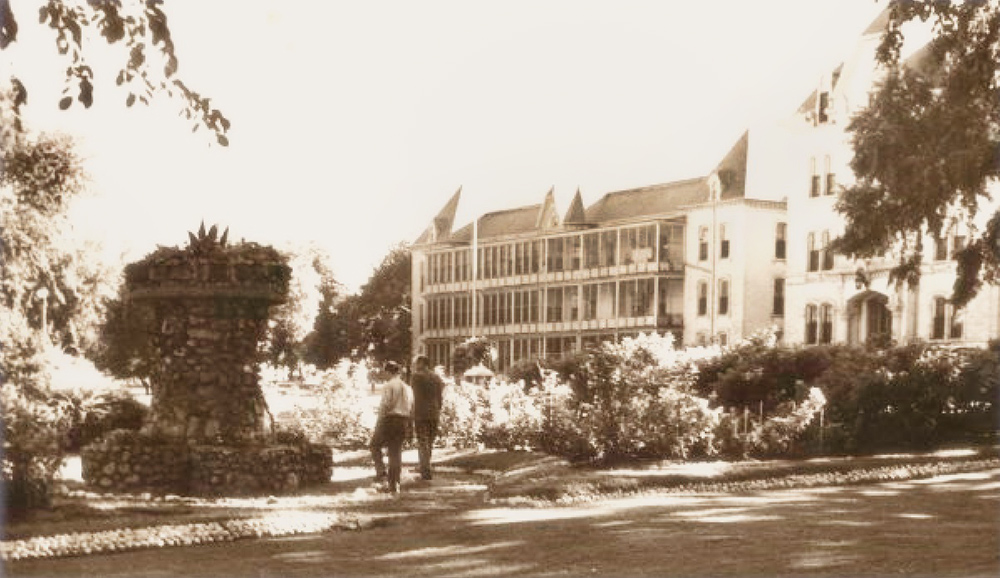 The future of this land became a political football when a variety of stakeholders proposed intensive development, including 6-story mixed-use buildings containing hundreds of apartments. On the other hand, the woods have been identified as a primary environmental corridor and critical part of a connected eco-system that includes meadows and wetlands. These provide unique habitats for a number of species the Wisconsin DNR labels as of “special concern.” Additionally, the woods and surrounding area provide a natural sanctuary for people seeking respite from existing urban development, as it did for asylum residents over 100 years ago. Grassroots groups have been working for decades to protect this land from future development. 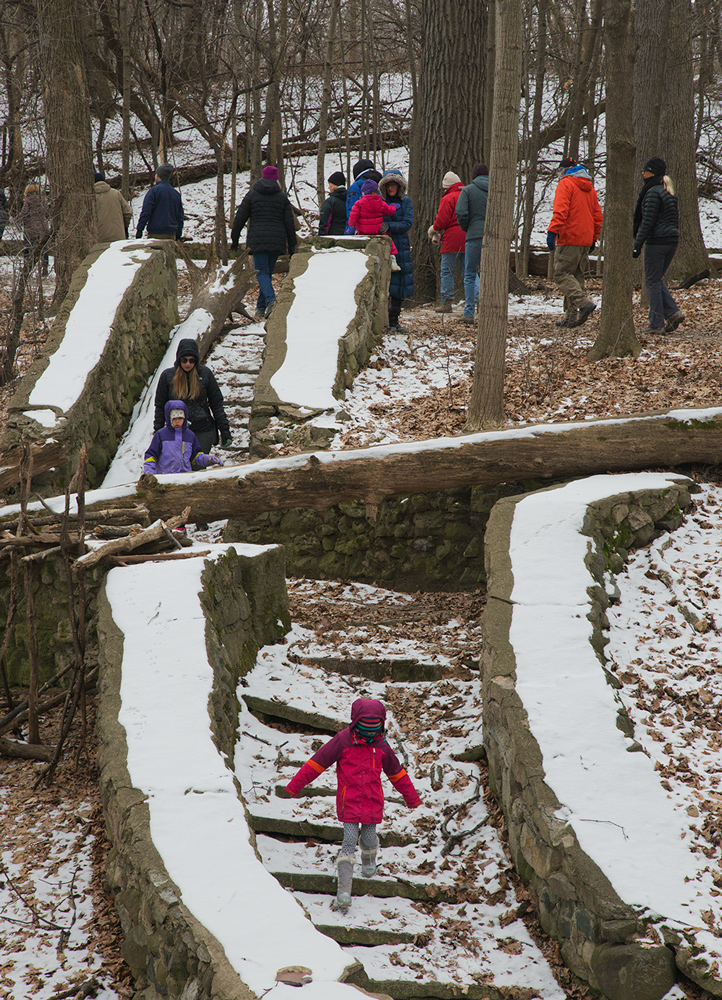 Over the course of 150 years, humanity has graced this area with elements like fieldstone staircases and a split-boulder pavilion, which complemented the structure of the formal hospital. To enhance enjoyment by modern-day visitors, our interactive map highlights some of the former and current elements that can be seen there. Since there is no formal path system, each visit can be a custom-crafted adventure to new points on the map. When the link is used on a mobile browser, the upper right corner contains an optional Google sign-in (sometimes a plain white box.) Selecting this will open the map in Google Maps which will then show a visitor’s location relative to any of the entries. 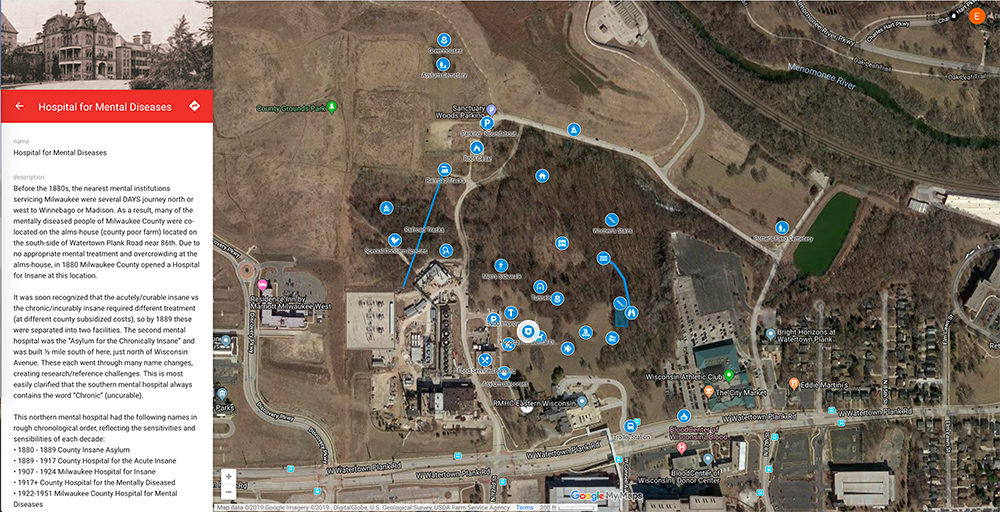 There are multiple images for each entry, which may require selecting the lead picture to reveal the rest. Some points of interest are included beyond the Sanctuary Woods to further expand the adventure. 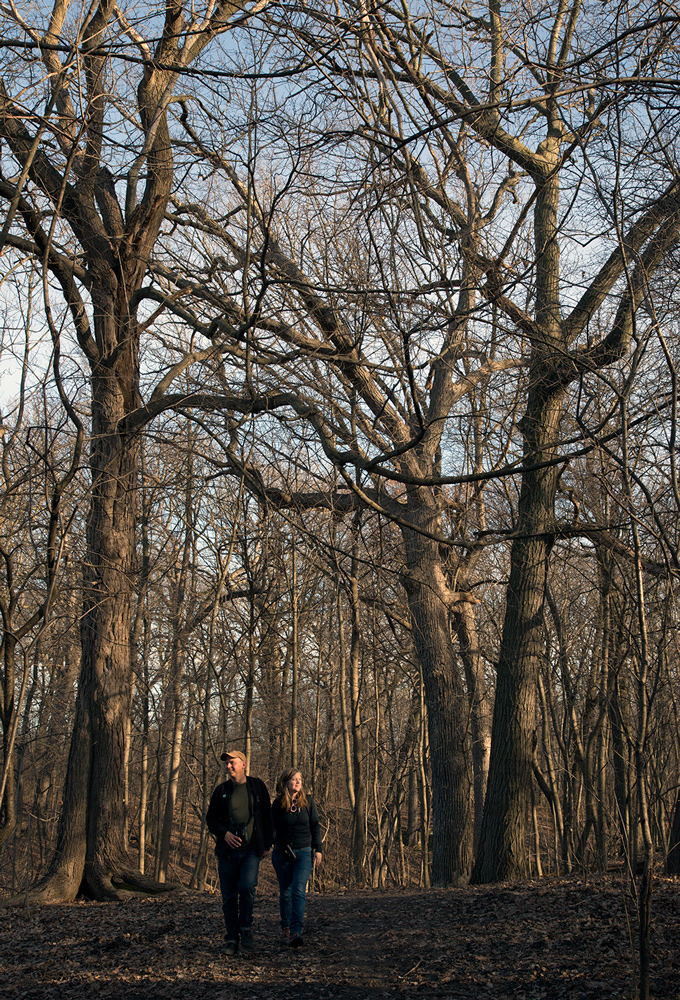 Jonathan Piel is a local amateur historian. After years of providing tours of the area, Piel crowd-sourced information to create this interactive map. He is passionate about informing people about this space so that they can also unfold the mystery of the remaining artifacts and the unique dense urban forest. With this connection, more people can help ensure it is protected from development which would further compromise the habitat and history. Jonathan is always seeking new resources to include, from pictures to personal experiences, and can be reached at tosahistory13@gmail.com. Website: https://tosahistory13.wixsite.com/tosa

Note: Some of the historical photos used here and on the interactive map have been found on the internet where they are so prolific and so often unattributed that it is difficult to ascribe a source. The author thanks the local historic societies who have preserved historic photos and made them available.